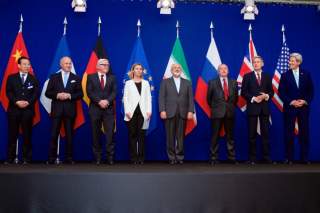 The parties to the talks over Iran’s nuclear program seek to reach an agreement by the self-imposed (and therefore extendable) deadline of the end of this month. No agreement has yet been reached, and statements made by the various parties provide an incomplete and not entirely consistent picture of the basic provisions to be included. Nevertheless, the question most hotly debated among political leaders and pundits is: “Is this a good deal?” The logical response to this question is: “Compared to what?”

Almost all of those who maintain that the emerging agreement is not a good deal have as their basis for comparison “a better deal.” But that’s of no practical use. Everyone would prefer a deal that they judge to be better than the one that appears to be emerging. Disagreements arise over what would constitute a better deal and over the feasibility of achieving it.

The emerging agreement would constrain for ten to fifteen years Iran’s ability to produce the highly enriched uranium or plutonium needed to make a nuclear weapon, thereby lengthening the time required for Iran to make enough material for a bomb from the current two to three months to a year or more. A “breakout time” of one year would provide the world with at least a year of warning time between detection of Iranian noncompliance and assembly of the first Iranian bomb.

This would be accomplished by measures such as reducing the number of centrifuges enriching uranium, prohibiting production of highly enriched uranium, reducing stockpiles of lesser-enriched uranium, reducing plutonium production capabilities, and prohibiting the separation of plutonium from used nuclear reactor fuel. Verification of compliance would be accomplished by monitoring and inspection of Iran’s declared nuclear facilities, managed access to suspicious sites that had not been declared by Iran, and additional measures tailored to the agreement. As a quid pro quo for the constraints on its nuclear program, Iran would receive sanctions relief as the agreement is implemented.

A number of issues remain to be resolved if an agreement is to be reached. For example, what would be the precise numbers, types, and locations of centrifuges permitted? What special verification procedures would be employed? For how long would the various constraints and verification measures remain in place? On what basis and on what schedule would sanctions be lifted?

What if the negotiations do not produce a deal, or if a deal emerges from the negotiations but is rejected by action of the U.S. Congress or by Iran’s Supreme Leader? What might be done then to block Iran’s path to a bomb?

Some believe that the imposition of harsher sanctions on Iran would bring them back to the bargaining table and induce them to make further concessions. Others believe that, based upon Iran’s behavior to date and a history replete with failures of economic sanctions, there is little likelihood that harsher sanctions would lead to an agreement more favorable to us. If a better deal were to be beyond our reach, we would be left with two options of last resort: (1) military strikes against Iran’s nuclear infrastructure—that is, war with Iran; or (2) adapting to an Iran whose nuclear program is unconstrained by the measures that would have been imposed by an agreement.

The question upon which we should focus is: “Is this deal good enough?” It is because we don’t trust Iran that a formal agreement is being pursued. Detailed descriptions of the constraints to be imposed and of the measures to be taken to verify compliance and provide timely detection of any noncompliance are essential. This philosophy guided the United States in its successful arms control negotiations with the untrusted Soviet Union, and it should guide us now.

If the only matter of interest to us were constraining Iran’s nuclear program, then the emerging accord is unambiguously better than no deal at all. After all, the emerging accord would substantially increase the breakout time to an Iranian nuclear weapon and would provide for verification measures that go well beyond those currently imposed by the Nuclear Non-Proliferation Treaty (NPT). The emerging accord has downsides as well, including the legitimization of Iran’s enrichment program and sanctions relief that would provide funds that might be used to increase its military capabilities, its support for terrorism, and/or its influence in the Middle East.

Individuals can differ on the weights they give to the pros and cons of the emerging agreement.  If and when the negotiations yield an accord and its terms are made available, informed judgements can be made on whether that deal is good enough. Based upon currently available information, my expectation is that if the negotiations yield a deal, it will be good enough; that is, it will enhance the security of the United States and of our allies and friends in the Middle East and beyond.

Albert Carnesale is Chancellor Emeritus and Professor at the University of California, Los Angeles, and Chairman of the International Council of Harvard University’s Belfer Center for Science and International Affairs.