The Iraq/ISIS Debate: Beware the Ghosts of Saigon and Karbala 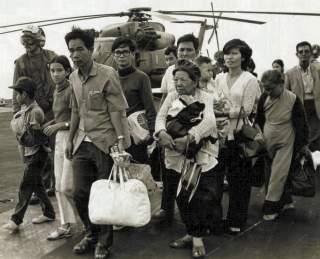 Are we about to witness a “Saigon moment” in Baghdad? Or are we perhaps witnessing something more comparable to Iraq's February 1991 uprising, only this time in reverse?

Before addressing those questions, it’s worth considering Heather Marie Stur’s view that the Vietnam War is a bad comparison for Iraq. Certainly, it is right that we understand the slippery slope to a quagmire (as Paul Pillar has argued) but the Vietnam War also has applicable lessons for managing exit strategies.

Stur is right to suggest however, that the damage inflicted to Iraqi society by years of sanctions, war, sectarian governance and the shifting components of Iraqi politics needs to be better understood by policy makers. Reading about the Montagnards will not help that.

However, unlike in 1975, the United States has now militarily reentered the fray. A process has begun of assessing a bloated (and expanding) army that is moving brigades and even divisions across huge expanses of terrain, against a comparatively nimble and well-equipped insurgency.

Aside from the security situation, we also see America’s adversaries sense a moment of weakness after an unpopular war. After Saigon fell, U.S. adversaries were quick to exploit America’s setback. At Cam Ranh Bay, Russia found a perfect home for the Soviet Pacific Fleet, as well as airfields at Da Nang. Across the world, insurgents, terrorists and dictators (including Saddam Hussein) were emboldened.

Nonetheless, Ford had promised that “the United States would not permit our setbacks to become a license for others to fish in troubled waters.” But he could do little to stop Russia from casting their fishing lines. In Iraq today, Obama still has options to compete with the worst aspects of Iranian influence, but the situation is tenuous.

Iran has been quick to exploit U.S. indecision, not only in the post withdrawal phase but also historically, following the 1991 uprising against Saddam. As Saddam’s shells rained down on Karbala and Najaf in the fateful months of February and March 1991, America stood aside fearing Iranian influence. But in the ensuing months, Iran increased its support and sanctuary for anti-Saddam groups, while U.S. efforts to support resistance were hampered by the memory of ‘91. Today, as Obama weighs his options, Iran—and now Russia, are moving quickly.

Historically, only in Vietnam have we witnessed such a dramatic collapse of a (largely) U.S.-created army. As in Vietnam, here is a disaster primarily overseen by a confrontational autocrat who has weakened his forces through coup proofing and micromanagement, although blame cannot be laid solely at the feet of Maliki: other powerful actors, both Sunni and Shia, have done much to fan the flames.

In Iraq, the same haunting questions loom large: how much of this problem is political and how much is military? As Obama mulls this question, the security dimension of the problem appears to grow.

It is therefore necessary to understand the limits and opportunities of security cooperation on this scale. Notably, almost every malady that has plagued the collapsing Iraqi security forces once plagued the Army of the Republic of Vietnam (ARVN).

Furthermore, as the United States considers strategic and tactical guidance for Iraq, several lessons stand out. If the United States presses harder for Maliki and his allies to do more to revive the Sahwa, or if Maliki instead relies on a vastly expanded network of Shia militias, what chance do they stand against better-equipped and more-experienced insurgents? The example of the numerous but lightly armed local Regional Forces in South Vietnam does not bode well.

Like the last months of Saigon, these are critical days for Iraq. Is the country now doomed to fall into an abyss of conflict, one that threatens the region and 40 percent of the global energy supply? Many commentators have noted that ISIS cannot seize Baghdad. But by killing off any chance of sectarian harmony, the organization can pose different risks to U.S. interests. Even if ISIS works out how to use captured GPS guided artillery, we probably won’t see a full U.S. Embassy evacuation, complete with Iraqis clinging to helicopter skids. But a vast impotent embassy in a region of chaos could be just as humiliating.

However, while ISIS has significant funds and resources, these are far from adequate to match its goals in the long run. Some have posited that ISIS simply do not have enough money to maintain the current quality of life (civil servant salaries, fuel, government-subsidized food) for Iraq’s Sunnis, which could soon cause them more discontent.

Of course, a terror-financing issue in Iraq will not finish ISIS. Jordan has been threatened and contains an apparently growing number of IS sympathisers. The GCC countries have been threatened, and Saudi Arabia has even been shelled by both Shia and Sunni terrorists. Many Iranians are vitriolic, cursing Saudi Arabia for the crisis, and even the United States (a popular theory is that America backs the IS).

ISIS is desperate to capitalize on politically alienated Sunnis all over the world. Stemming this contagion will require the region-wide approach so many observers have been waiting for. An example of this is Saudi Arabia’s recent pledge to persuade Iraq’s Sunnis to support a political process. To say this is easier said than done is a huge understatement, but this is a war of small percentages: many factors combined to hobble Al Qaeda in Iraq in 2008, and any success now would be no different and would perhaps face more challenges.

Return of the advisers

Nonetheless, the vast majority of Iraqis have rallied against ISIS. But the terrorists can exacerbate the growing radicalization of the Shia majority, who are in some cases turning to Iran and even Hezbollah for help. ISIS provocation intends to revitalize the sectarian killing sprees of 2006, only this time we have the absence of raw U.S. power and its subsequent political influence. Those who worry that greater U.S. involvement is simply backing one side in a civil war must consider the threat ISIS poses to Sunnis, as they intentionally provoke retaliation from the Shia.

Amid this chaos, one might subsequently wonder what several hundred advisors can do, especially in the absence of air power that could strike ISIS convoys and help save beleaguered ISF bases.

James Willbanks was an advisor to the ARVN as they defeated the 1972 Easter Offensive, and has written one of the most compelling books about the American exit from that war. Abandoning Vietnam is a story of U.S. leverage applied too little and too late against a leader hailed by some as democratically elected, with apparently 34.8 percent of the vote.

Willbanks thinks that U.S. advisers will almost inevitably have to get their hands dirty:

It will be very difficult for the advisers to have any effect unless they become closely involved in assisting the Iraqis in planning both operations and logistics. A good example of this can be seen in the 1972 North Vietnamese Easter Offensive. The advisors, in each of the three main attacks at Quang Tri, Kontum, and An Loc were on the ground and fighting alongside their counterparts, assisting in planning and coordinating U.S. support to the South Vietnamese forces. Other U.S. advisors worked with South Vietnamese logisticians to support the forces, involved in close quarter combat.

Willbanks is concerned however, that this may be a “too little, too late” scenario:

In Iraq, this approach will be problematic since there is no U.S. support to coordinate. The bottom line is that, as far as training the Iraqis is concerned, U.S. forces were withdrawn prematurely before completing the process of building a credible Iraqi force capable of operating on its own. Perhaps the answer now is to put the advisors with the best units and assist them to plan operations to take on the IS. The key will be finding IA units who can handle the job. I feel for the advisors who will be hanging out there on their own.

Ben Williams served as a Green Beret in Mosul in the last years of the war, and shares some of Willbanks’ concerns. Williams partnered with ISOF to target Al Qaeda remnants, back when civilian casualties in Iraq were a few hundred a month.

But the Iraqis were still dangerously dependent on U.S. support, including helicopters. In the past year, the United States has been sharing intelligence with Iraq and this assistance has been steadily increasing. The Iraqis are largely reliant on their best units, including ISOF, to tackle what is now a large but unstable alliance of insurgent groups. In this respect, the Green Beret advisory effort is well placed to help. Williams sees a plus that old relationships could be quickly rekindled:

I frequently conducted combined missions with another ODA which had Mosul SWAT as its partner force. Shared operational experiences such as this would facilitate the reestablishment of working relationships and functional structure in any future U.S. efforts to train, advise, and assist a rapidly growing ISOF.