The ISIS Paradox: A Mirage or Mortal Threat? 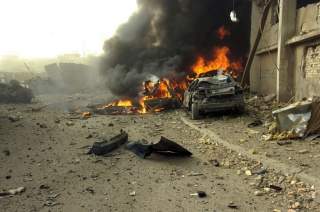 It is no simple feat to leap almost overnight from being a relatively unknown organization to capturing headlines around the world. From Washington’s vantage point, the Islamic State of Iraq and al-Sham (ISIS) has catapulted itself from being merely a localized challenger to secular rebel groups battling the Assad regime in Syria, to now posing a broader threat to regional stability and to the territorial integrity of both Iraq and Syria. By capturing large swaths of land in Syria and Iraq, including strategic border crossings, and then subsuming these spoils of war under a self-proclaimed Caliphate, ISIS is making a mockery of the existing regional order, claiming to have permanently erased the boundaries that have served as the framework for regional stability since the end of World War 1. Moreover, in a potentially stunning reversal of fortune, ISIS poses a threat to al-Qaeda, challenging its jihadist cachet and the durability of some of its most strategic alliances.

Washington is treating the threat of ISIS as a byproduct of the governance problems in Iraq and the chronic civil war in Syria. But the problem we are facing today is that ISIS has now already crossed the Rubicon from being merely a symptom of existing conflicts to becoming a source and catalyst of new conflicts. It has done this through its territorial gains, by conflating the Syrian and Iraqi civil wars into one large battlefield, and by threatening the stability of the broader region. What this means is that solutions that might have worked in the past, like changes in the make-up of the Iraqi and Syrian governments, might be necessary, but are unlikely to be sufficient under current circumstances.

As nightmarishly impressive as ISIS’s accomplishments are, it is necessary to also understand that the group represents a paradox: it is both an opponent with very real and treacherous capabilities and ambitions, but it is also a mirage in the sense that those same strengths are likely to become its greatest weaknesses over the long term. While it has made significant gains over its adversaries, and controls large swaths of strategic territory in Iraq and Syria, it is beset by several internal contradictions and vulnerabilities, which over time could lead to its undoing.

First, let’s examine what is real about ISIS’s strengths. The group’s capability derives largely from its charismatic leader, known by the nom de guerre, Abu Bakr al-Baghdadi. The narrative he has crafted and his very real, and largely destructive, accomplishments appeal to disenfranchised Iraqi and Syrian Sunnis, and other largely Sunni constituents in the region, who are committed to overturn what they deem to be an unjust and unsustainable status quo. And to those with a jihadist bent who believe that al-Qaeda is a diminished organization, he represents the best hope to achieve Osama Bin Laden's aspirations. To them ISIS is in the process of making al-Qaeda’s longer term aspirational goals, of destroying corrupt states like Syria and Iraq, erasing illegitimate and artificial boundaries, and creating a new Islamic Caliphate, a reality today.

What is also real is that ISIS’s planning, execution and how it strategically leveraged its battle-tested strengths and victories in Syria, to then swing back to Iraq with tornado-like ferocity, demonstrates that it is heir to some of the best strategic thinking that was embodied by earlier jihadist efforts. ISIS has defined not only the battlefield, which it has carefully prepared through a difficult-to-execute combination of terrorist methods and insurgency warfare. But it has also proven nimble enough to combine secular revolutionary methods, some drawn from Maoist doctrine, with more cosmic religious dogma that resonates with mostly young, disenfranchised Sunni Muslim men.

Another very real part of ISIS’s capability is that it knows that it must work with other groups if it is to control significant territory. These groups are usually local and may be either allied or simply networked temporarily with ISIS to achieve complementary goals, like the Iraqi Sunni tribal and political leaders. As long as ISIS is winning and expanding, such alliances will act as a force multiplier and potentially provide the manpower for a more conventional defense force, while ISIS troops act as the fighting vanguard for onward expansion. Given ISIS’s hubris, its brutality, the fragility of the region, and its alliances, it could pose significant threats beyond the areas it currently holds. It threatens an already weakened Jordan, controlling all of its border crossings with Iraq. And it could potentially pose a threat to Saudi Arabia, a reality which is already being acknowledged in, and eliciting a response from, Riyadh.

Second, let’s tease out what about ISIS’s strength and ambitions represent a mirage. Its duly noted real strengths notwithstanding, it is riddled with internal contradictions and potential vulnerabilities. An example is the Caliphate that Abu Bakr al-Baghdadi has boldly self-proclaimed in recent days.

His notion of a Caliphate wrongly assumes that Sunni Islam is a durable foundation for political community in Iraq, Syria and beyond. This assumption, at least in the long term, will likely be proven false, and even absurd. The last Islamic Caliphate, the Ottoman Empire, thrived in a pre-nationalist era, and was ultimately undermined during the lead up to World War One, not just at the hands of the European colonial powers, but also by the emergence of Arab and Turkish nationalist forces that trumped the notion of an overarching Islamic empire as the basis for political community. Today the Middle East is characterized even to a greater degree by interwoven layers of political and religious identities. There is nothing pre-determined about a Salafi-jihadist identity having primacy over tribal, ethnic or nationalist identities.

To be clear, the idea of a return to a Caliphate may be appealing in jihadist circles, but most of the Sunni leaders in Iraq and Syria are mobilizing behind ISIS because it is their best opportunity to achieve clear political goals, not because they have bought into the notion of an Islamic Caliphate that is governed on the basis of an extreme variant of Sunni Islam. While al-Baghdadi’s vision may be that other layers of political consciousness, namely nationalistic, ethnic and tribal identities, can be superseded and expunged via violent jihad, this will not be compatible with the aspirations of most Sunnis or their leaders in either Iraq or Syria. Unless ISIS is able to revolutionize the social and political landscape in a ruthless Khmer Rouge fashion, its notion of a Caliphate will be problematic and rife with internal contradictions. In other words, it will be virtually impossible to erase centuries of deeply embedded nationalist and ethnic identities and supplant them with ISIS’s virulent ideology.

A case in point is that as complete as the Islamic revolution in Iran was in 1979, Iranian nationalism appears to be stronger today than it has ever been. Neither the Arab invasion that brought Islam to Iran in the 7th century, nor the more homegrown Shi’i Islamic revolution of the 20th century, were able to erase Iranian identity, culture, or the underlying nationalist foundation of political community. ISIS will be unsuccessful if it tries to erase the multiple layers of political identity that are features of the landscape in Iraq and Syria. Using the Caliphate as an aspirational goal and rallying cry for mobilizing jihadists, as al-Qaeda has done, is very different than actually making it work as an enduring basis for political community, as ISIS aspires to do.

Another part of ISIS that is likely to prove a mirage is the notion of expanding (the Caliphate) beyond Iraq and Syria, a goal the group recently announced, and is now reflected in its new name, the Islamic State (IS). ISIS’s territorial gains are impressive so far, but keep in mind that they have taken place within already weakened environments like Syria and Iraq. Unless ISIS can blunt what are likely to be efforts by Syria’s Assad and Iraq’s al-Maliki (or his successor) to roll-back its territorial gains, can consolidate its current positions, and can attract legions of more fighters, further territorial expansion could prove difficult and even lead to overextension. Saudi Arabia and Jordan, the most likely targets for expansion, are countries that are not hobbled by civil war, despite some internal challenges, and have greater defensive capabilities against a possible onslaught by ISIS. Moreover, they also have military ties with the United States to draw on in case their territorial integrity is endangered.

One open question is whether ISIS’s defensive capabilities will also prove to be a mirage. It is likely to face competition from within the community of jihadist groups. Since Al-Qaeda repudiated it and threw its support behind the Syrian group, Jabhat al-Nusra, the leadership of ISIS has had to worry about al-Qaeda’s defensive efforts to shore up its own alliances, and also its offensive efforts that challenge ISIS’s tactics, its strategy and its doctrine.

Al-Qaeda’s strengths are different than ISIS’s but no less formidable. Its strategies are built on already proven theories of how to work with affiliated and franchised groups, while notwithstanding ISIS’s victories thus far, its theories of how to hold ground and expand are yet unproven. Moreover, al-Qaeda’s alliances are more strategic than ISIS’s, built on a common vision if not always a common set of goals. ISIS’s alliances, both within Iraq (Sunni tribes and former members of Saddam’s regime) and Syria are built on convenience and the exigencies of war, not necessarily on a common vision of political community.