The Islamic State Problem is a Syria Problem 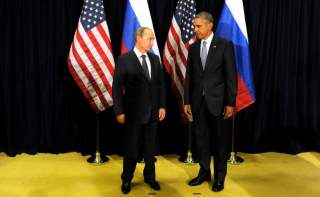 With the attacks in Paris last Friday night, the Islamic State has thrust itself to the forefront of the geopolitical map. Europe, Russia, and the United States are grappling with how to defang a terrorist organization that has promised to deliver further carnage as part of its crusade to establish a new caliphate in the Middle East. To address the questions surrounding the dangers posed by the Islamic State and by the ongoing conflict in Syria, the National Interest magazine and the Center for the National Interest convened a high-level panel on Wednesday for a luncheon discussion.

“It’s very hard to solve the Islamic State problem without solving the Syria problem,” Georgetown scholar and panelist Daniel Byman said in introductory remarks. Byman was joined by Andrew Parasiliti, the director of the Center for Global Risk and Security at RAND, by the president and CEO of the Center for the National Interest Dimitri K. Simes, by the Center’s vice chairman and former undersecretary of defense Dov Zakheim and by its chairman and former four-star Air Force General Charles G. Boyd who was also deputy commander in chief, U.S. European Command, and has extensive experience with no-fly zones.

So far, the Islamic State has been a concern primarily to Syria and the Middle East. “The truth is deeply buried in its name,” Byman said, “it wants to create an Islamic state,” adding that the group’s rhetoric focuses obsessively on consolidating and expanding territory. “I still think this is the primary focus of the group,” he said. Before Paris, the track record had been to try to bring people into the Islamic State, shunning refugees. And it had been largely successful, with an attacking concoction of apocalyptic flare and sectarian rhetoric that appealed especially to young men. “This is a group using suicide bombers on an industrial scale at the battlefield. So, it needs bodies at a mass level,” Byman said.

Paris seems to signal a change. “Is Paris a one-off or is it part of a sustained, detailed campaign to strike in the West?” That is what the United States and Russia must grapple with in the weeks ahead. “The problem is,” Byman summed up, “any option you give me for solving Syria, I’ll tell you why it won’t work.”

Parasiliti was slightly more sanguine. He focused closely on the dynamics of the conflict in Syria itself. “If we want results and the resolution of the conflict in Syria, it begins with U.S.-Russian coordination,” said Parasiliti, “not just in the political process, but in the military process.” Washington and Moscow have the ability to influence the Syrian outcome unparalleled by any other duo of nations. But that does not negate the importance of other nations. Saudi Arabia and Iran are in the same room discussing what to do in Syria, he said, something new in this round of talks. In all, Parasiliti said, he is “cautiously hopeful.” To move forward, Washington should understand Iran’s interests. “For Iran,” Parasiliti emphasized, “this is their strategic depth. They had Syria, they could lose Syria.” For now, Tehran sees backing Assad as “the strongest weak hand” it has to play.

“Why did Putin decide to take this dramatic step in Syria?” was the question Simes posed to a leading analyst in Russia during a phone conversation shortly before Wednesday’s discussion. He received a succinct answer: “Thank Barack Obama.” Once the White House made the case that Russia was simply a regional power, safe to be ignore, “Putin had to look for an opportunity to demonstrate that Russia was still a very important player,” Simes said, summing up his conversation.

Offering his own take on the situation, Simes said that this view was clearly somewhat “simplistic” but that it contained several grains of truth. He noted, “I think that Putin’s motives were essentially tactical.” The Russian president faced the confluence of several issues, from Bashar al-Assad’s vulnerability to Moscow’s diminished interest in the Ukraine conflict, from a strained domestic economy to uncertainty after the Iran nuclear deal.

Since the accord, Simes explained, Moscow has been looking for a common, substantive project with Iran to blunt any potential rapprochement between Washington and Tehran. Furthermore, the performance of the Russian military in recent weeks has been unexpectedly effective, a point of pride among Russians, especially considering widespread skepticism of its capabilities prior to its introduction into Syria. Nonetheless, he said, it is not clear that Moscow has an exit strategy. Simes stressed that a deal could likely be reached with the Russian government over Syria but that it would also require flexibility from the U.S. side.

Zakheim suggested that Russia will wait until Obama departs from office and assess his successor before cutting a deal. ‘Weak incrementalism,” he said, has been the U.S. policy. The United States has failed to contend with uncomfortable truths. For example, one solution to the refugees fleeing conflict is to keep them in Syria, Zakheim said, but essential to this is not using such safe zones to train anti-Assad forces as well. Such a step would require Russian support. “If it’s a purely humanitarian safe zone,” he said, “I don’t think they are going to object. They are objecting to the safe zone being a vehicle for going after Assad.”

Zakheim added that there are also constraints within the U.S. budget, which is still operating under the framework of the so-called sequester. “Every dollar that we spend on a refugee is a dollar that comes out of something else,” he said. “So what do you want to take it out of? Meals for kids in schools? Roads? Defense?”

Another uncomfortable truth: Russia has no intention of leaving the Middle East. Putin can easily finance Russia’s operations in Syria for at least the next eighteen months, Zakheim said. Why is this important? “I don’t think he’ll change his policies one iota until he finds out who the next president is,” he explained. Zakheim’s words of wisdom for the next occupant of the White House: “As long as we lead from behind, Putin will leave us behind.”

The last word came from the audience, and it was a telling one. America is engaging in about six flights a day to bomb the Islamic State and the operating principle has been that there can be zero civilian casualties. “There is a lot to be gained. . . by applying airpower in the case of disassembling the Islamic State that we have not done to date,” said retired air force general David Deptula, current dean of the Mitchell Institute for Aerospace Studies, after the opening remarks by the panelists. “You can dismantle them and cause them to cease being effective, not in a matter of months, but in a matter of weeks,” he said. The hesitancy of the current administration, its adherence to a policy of zero civilian casualties as acceptable when engaging in an airstrike, has hindered effectiveness. “That has induced delay,” Deptula said. “That has yielded to our adversaries advantages that are simply incomprehensible.” Strong words. But as the conflict in Syria becomes increasingly volatile and the violence spills over into Europe, they are not ones that can be easily dismissed.