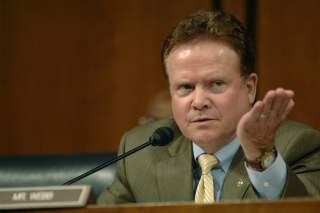 Hillary Clinton won the first Democratic presidential debate, of that there can be little doubt. Sorry Bernie Sanders, feel free to take another week to mull your 2016 options Joe Biden. But the most oddly compelling candidate on the stage was Jim Webb.

That’s not because Webb did anything to help himself with the left-leaning Democratic primary electorate—he might as well as have told the Las Vegas audience that Clinton was precisely why he once wanted to keep women out of the military—or even had a strong performance in any conventional sense. Pro tip: if you are complaining about not getting enough time in a debate, rather than simply making your points over the moderator’s objections, you are losing.

What Webb did do was offer a glimpse of why I found him such an intriguing political prospect when he unexpectedly ran for Senate as a Democrat in 2006, against the Republican incumbent he had endorsed six years prior. A major reason for his switch was the war in Iraq launched by the Republican he had endorsed for president in the same election.

A proud Marine, distinguished combat veteran, dedicated public servant, talented author and sharp polemicist, Webb offered an opportunity to shake up stale political categories for the good of the country. He was a principled opponent of the Iraq war and the neoconservative/neoliberal foreign-policy consensus that spawned it, but unlike a lot of liberals and right-leaning noninterventionists who fit that description his national security credentials were impeccable and his commitment to American military strength unimpeachable.

Webb had quit as Ronald Reagan’s secretary of the navy because he didn’t think the administration was committed enough to maintaining our military might. Dennis Kucinich he was not. Even in times of national peril, this country has seldom lacked eloquent voices for peace. What has instead been in short supply are credible advocates of realistic alternatives for a less interventionist approach to American security, at least in politics.

Yet Webb also seemed like a much needed reinforcement for a once common political species that had become quite endangered: the independent-minded, even conservative Democrat. Even liberal Democrats could once oppose abortion and wasteful government spending, like William Proxmire, or question the benefits of continuous mass immigration, like Eugene McCarthy.

As late as 1993, there were so many conservative Democrats that Bill Clinton could barely get his tax increase through a Senate that had a Democratic majority that was 57-43 at its peak, just three shy of the filibuster-proof supermajority that enabled the passage of Obamacare 17 years later. The 42nd president only prevailed courtesy of Al Gore’s tie-breaking vote.

I never operated under the illusion that Webb would be some kind of antiwar Zell Miller, a nominal Democrat who mostly voted with conservatives in his later years. But it never occurred to me he would be a mostly party-line Democrat and Harry Reid loyalist, independent only by the partisan standards of today’s Congress.

Webb’s generally liberal voting record was a source of annoyance to me when he was in the Senate. Even more dispiriting was the way he cozied up to figures for whom he long had contempt, like the Clintons and John Kerry, and downplayed his past conservative positions to ingratiate himself to underwear-clad bloggers.

There was none of that in Webb’s Tuesday night debate showing. Webb was certainly more polite and nuanced in making his arguments for Second Amendment gun rights and limiting race-conscious affirmative action to African Americans than a Republican might have been. He wasn’t Donald Trump on the culture war or Paul Ryan on economics.

But Webb didn’t shy from pressing his disagreements with the rest of the field, showing himself to be the most conservative candidate in the debate by a wide margin. He also reminded us he opposed the folly of the Iraq war without sounding like a member of Code Pink and came the closest—though sadly not close enough—to clear critique of Hillary’s Libya war. (The former secretary of state’s defense of that fiasco reveals she has learned the wrong lessons from Iraq, the previous misadventure that bore her stamp of approval.)

Both Webb and Lincoln Chafee were reminders that a nontrivial number of voters with GOP sympathies had been repelled by George W. Bush-era neoconservatism, much like George McGovern drove a greater slice of culturally conservative, pro-defense Middle Americans away from the Democratic Party.

Webb was alienated first by the McGovern Democrats and then by the Bush Republicans. Like millions of Americans, he doesn’t look like he’s at home in either party today.