The Limits of Liberal Open-Mindedness 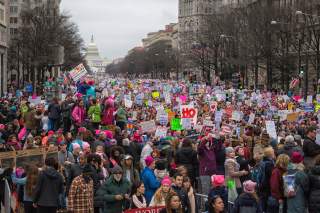 At age sixty-two, as a politically minded person living in “interesting times,” I have seen a lot of controversy. As a college student, I demonstrated against the Vietnam War, for women’s rights and against apartheid. My dissertation was on Arab anticolonial movements; my postdoctoral work was on the Black Power movement. Later, at a European think tank, I ran projects on how to better integrate Turkish migrant workers and Bosnian refugees. I spent time in Afghan refugee camps in Pakistan designing aid programs that would adequately reach their isolated and downtrodden women. I was an outspoken feminist, which caused me a lot of trouble with conservative professors, at conferences and with the ministries who funded my work, but I was part of a thrilling movement, and we persevered and achieved amazing changes. Later, right after 9/11, I got laughed out of State Department meetings for suggesting that a significant group of moderate Muslim opinion leaders existed and should be supported—something that has since, of course, become the dominant view.

When I think back and remember the postures that were considered radical at one time, I feel a sense, not only of accomplishment, but also of bemusement. Today, the views that got me denounced or mocked as a crazed radical are totally mainstream, and I sometimes have to pinch myself when I hear some conservative scion of industry or high-ranking military officer nonchalantly say something about gender equality that had earned me hoots of scorn when I was in my twenties.

In short, I have been a lifelong liberal. I had like-minded friends, and adversaries, and then there were those who disagreed but were willing to debate, and even those who invited me especially because it would liven up their dinner table talk. My father, a very traditional Southerner, was aghast at some of my views, but he never stood in my way; he merely told me that whatever I did or said, I should be sure that ten years down the road I would still be willing to own up to it in public. Here’s what never happened: I never lost a friend because they didn’t agree with one of my opinions.

Until today. Today, a Facebook friend and acquaintance of many years notified me on my page that although she had “always liked me,” she was unfollowing me because of our divergent views on Trump. (Hers: he is the Antichrist. Mine: he is our president, who was elected because he gave voice to some deeply held concerns of many of my fellow citizens, identified some real problems that legitimately need to be fixed and should be helped to find solutions that are in the best interest of our country). All I had done—my unforgivable offense—was to share a press article about a Kurdish peshmerga fighter who had named his newborn son Donald, in honor of Trump. (My unfriender, by the way, is the wife of a former European ambassador to the UN in New York, who finds it intolerable that an American citizen should support the elected American president. Hmmm.)

It did not occur to Ulla, or I guess she did not care, that I had been peaceably, with no murmur of protest, putting up with her far more strident anti-Trump postings. Nor did she bother to ask me what my views were, and why I held them. But I’d like to tell her, anyway. Ulla, here is why it’s fine with me that a Kurdish fighter named his little boy Donald:

1. Trump is a populist. Liberals now regard this a term of scorn, but I remember a day when we liberals took pride in being exactly that. We saw it as our role to stand up for the “disinherited of the earth,” the workers, the minorities—and not just the progressive and enlightened among them. Quite the opposite; we understood that the circumstances of their lives—poverty, lack of education, growing up in a climate of bigotry—could leave people with backward and reactionary views. Our job was to “meet them where they were”: to first understand their lives and their worries and grievances, and then engage them in discussion from a posture of solidarity. We were explicitly on the side of the descamisados, literally the “shirtless,” i.e., the unwashed, marginalized segments of society. Somehow this has morphed into a posture of smug arrogance, into the certainty that we on the liberal left are oh-so-morally-superior and more enlightened than those contemptible specimens who, by virtue of disagreeing with us, have revealed themselves to be irredeemable backwater rednecks, machos and racists. The wheel has turned so far that Trump, the wealthy capitalist with the all-marble home, is today the one who takes the “masses” seriously, who was willing to meet them “where they are”—geographically, linguistically and on policy. But will he now lead them, and all of us, to a pragmatic, problem-solving, middle-ground place? He says he wants to. Shouldn’t we be trying to make that happen—with him—instead of putting on little knit pink hats and dumping piles of angry, vulgar, deliberately provocative placards on his doorstep, which more or less sends the message that our values are political litter?

2. His critics don’t have much of a case; not yet, anyway. In my day, yes, we were ready to protest at the drop of a hat—but at least we waited for the hat to drop first. Preemptive protest has its risks; from a tactical standpoint, as an experienced old agitprop practitioner, I really can’t advise it. As my college sociology professor, who was our agitprop tutor, used to tell us: “Keep your powder dry.” What she meant was to conserve your strength and your arguments for when it really matters. Pick your battles; don’t give in to the temptation to toss about your energy like fistfuls of confetti. To chant and march with thousands of other people, journalists hovering to photograph your more outrageous slogans, feels good—but feeling good is not the purpose of serious political activism. (Nor is it a sure guide that you are in the right, by the way. I’m guessing that being part of a mob feels good, too, if history is any indication.)

Also, how often can you pull it off? In six months or a year, or two years, when the issues have become specific, the broad coalition that can agree on “we hate this man and his hairdo and his crude remarks” will almost certainly begin to crumble. How about some hard thinking about our country’s very real problems—multiple international crises when we are already overextended militarily and have not yet solved the ones we took on sixteen years ago, parts of our country in an extended economic slump; aging infrastructure that will cost a lot of money to repair; refugees and immigrants who present a humanitarian dilemma but a security threat, too—and figuring out some solutions that can work but are in line with your moral and political values? Don’t like his refugee policy? Angry about his freeze on visas from “problem” countries? That’s fine—suggest an alternative that you think can equally allow us to know whom we are admitting to our country, and what their intentions are towards us. That’s a bit harder, you may find, than painting a feel-good sign that says “refugees welcome.”

3. Trump may have revealed the fault lines in our country, but he did not create them. I think I qualify as something of a canary in the mineshaft on this matter. As already stated, I am a lifelong liberal (with, if you don’t believe that, a large body of writing attesting to my views over several decades). I became interested in Trump when it became clear, to my own initial surprise, that his views were not just resonating, but indeed were being received with relief and enthusiasm, by a very significant group of my fellow citizens. As a sociologist, I pondered why that was the case, and found that there were areas on which I agreed with him. Obviously, as a feminist there were quite a few aspects of him that I was not crazy about, but neither could I in my heart of hearts get behind Hillary. I was greatly bothered by her sense of entitlement, her breaking of security rules that would have gotten anyone else fired, and by the fact that her political record, while long in years, as she liked to emphasize, in my view was short on substantive achievements.

Nonetheless, I knew myself to be in a peer-group minority. For that reason, and because there did not seem to be much appetite for discourse, I mostly kept my thoughts to myself. I read what my Facebook friends were posting, only rarely posting something that could be construed as contrary. Also, it felt impolite to use a friend’s Facebook page to publicly contradict them or argue with them, so I didn’t usually do that. At most, I asked a question—which, as soon became clear, was already too much. A former think tank colleague, someone I had always thought of as very smart, analytic and judicious, forwarded a call to join a protest against the visa freeze. Opening her link I saw that the march was being organized by a pro-Iranian group—one that did not have a website or any other public information about its ideology, agenda or membership. I asked my colleague if she knew the hosting group. I swear, that was the entirety of my posting. Bam: back came a lengthy, snarky rebuke. No, she did not. But it did not matter who was organizing, as long as they were bringing people together for a good purpose. (I beg to differ: I would like to know the agenda of anyone under whose banner I am choosing to march.) And that had always been the way things worked in America. (Really? I don’t remember a time when letting oneself be used for someone’s unstated purposes was the done thing.)