Is the Long-Awaited U.S.-China "Reset" Upon Us? 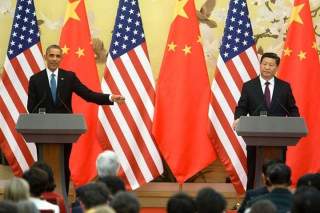 Expectations preceding President Obama’s recently completed trip to China were quite low. In the days before his departure, the chattering classes in America were loudly singing a chorus of doom and gloom regarding both the American leader’s policies and his country’s relationship to the Middle Kingdom. It seemed Obama was heading to his own, and America’s, funeral in Asia. All that was waiting for him in Beijing was China’s increasingly confident and blunt leader, Xi Jinping, who would surely be ready to shovel dirt upon the U.S. coffin.

Predictions of Obama’s doom were bolstered earlier in the week by Xi’s behavior toward his Japanese counterpart, Prime Minister Shinzo Abe. During a staged handshake between the two men, the Chinese leader breached diplomatic protocols and allowed his face to show utter disdain and contempt toward Abe. To be fair, Japan’s top politician reciprocated. The result was an almost comical, icy stare down that looked like it was out of the old World Wrestling Federation.

Given this context, anything less than an outright humiliation at the hands of the Chinese would have been a victory on the part of this greatly diminished American leader. However, a funny thing happened on the way to this anticipated denouement.

Rather than being buried by China, the U.S. president managed to come to terms with the Chinese on an extensive package of agreements. In short, he made functional issues on which the two sides share mutual interests the core focus of his visit.

This concentration unexpectedly made the trip one of the most substantive high-level meetings between the two sides in years. It was highlighted by an apparent deal on climate change and complemented by agreements on visas, aspects of trade and even confidence-building measures in the area of security.

Somewhat miraculously, the president had finally managed to lend substance and meaning to the long-anticipated reset in U.S.-Chinese relations. In short, when both sides operate within the framework of functional interests, they find extensive common ground upon which to negotiate settlements to their minor differences. This is more than a small breakthrough for both Washington and Beijing.

Such an accomplishment hinges upon a willingness to compromise. China did not get from Obama an acknowledgement that the U.S.-China dynamic had become a new type of great-power relationship. America did not receive from Xi recognition of the legitimacy of the United States’ role as a global hegemon. However, both leaders were generally content to be able to take home from their meeting agreements that have the potential to leave everyone better off.

Yet such a reboot is far from complete. It succeeds until a clearly defined point, after which it quickly unravels.

Outside the carefully crafted Venn diagram of overlapping practical U.S.-Chinese interests, it quickly becomes apparent that China, and perhaps especially Xi Jinping, is deeply impatient with the current status quo in the relationship. Xi—and by extension, his country—is entirely unwilling to be chastised by an international community that is perceived to be attempting to harm China.

Such prickliness is not especially new in China, but it was abundantly evident during the press conference the two leaders held at the end of Obama’s visit, and revealed just how limited the new terms of agreement between the two countries really are.

The media session began well, with both leaders reading prepared statements that accentuated common ground while carefully taking note of outstanding differences. But when discussion was then opened to reporters, a chill enveloped the room.

Xi took distinct umbrage at having a critical question directed toward him. He appeared so displeased with the query about being more lenient in granting foreign reporters to China visas that it initially seemed as if he would simply ignore it. However, Xi then warmed to the topic, and concluded with a blunt warning to all foreign countries not to interfere in China’s internal affairs—with special reference to the situation in Hong Kong where democracy activists continue to press their claims.

Such a performance stood in sharp contrast with the basket of agreements the two sides had reached during their preceding meetings.

It leaves us with two broad, fundamental questions regarding the underlying meaning and significance of what is likely to be President Obama’s last official trip to China. First, did the visit truly change and improve U.S.-Chinese ties, or did it do little more than paper over gaping differences between the two sides? Second, is Xi—and China—in the proverbial catbird seat when it comes to dictating the terms of how things will unfold from here on out?

Xi presents himself as being in a position of strength, but he is weaker than he appears. A truly strong leader would not need not stare down his neighbor, or take such offense at a reporter’s question. Xi’s problems, then, lie largely at home, as he attempts to steward the Chinese economy forward, reign in dissent and manage restive peripheral regions such as Hong Kong, Tibet and Xinjiang, not to mention Taiwan. By extension, these are the main points of contention in the U.S.-Chinese relationship. The problem is that it will be very difficult, even impossible, to find mutual interests between the two sides on these scores.

The U.S. president has not yet even left Asia, so it is too early to make final pronouncements on any of these fronts. However, it does seem that while none of the fundamental challenges in U.S.-Chinese relations were resolved, the possibility of establishing a more secure dynamic is more tangible now than anyone would have thought a few days ago.

In the end, Obama avoided being treated as a Peking lame duck, even if he also fell somewhat short of a total reset of the U.S.-Chinese relationship.