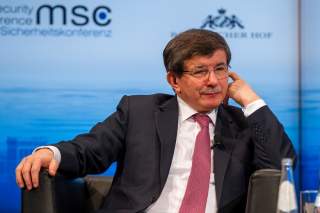 Politics is a messy business. Ahmet Davutoğlu learned this the hard way when he announced on May 5, 2016, that he would step down both as Prime Minister of Turkey and as chair of the ruling Justice and Development Party (AKP). Until recently, Davutoğlu was one of the symbols of Turkish politics. During the 2014 election, the AKP campaign song by Turkish singer Erhan Güleryüz referred to Davutoğlu as “the brave, righteous and honest” man who is “the true grandson of the Ottomans,” and who “linked arms with reis,” a Turkish word for a leader that connotes hierarchy and loyalty. However, Davutoğlu’s political position has gradually declined over the years, alongside the Turkish foreign policy that he intellectually and strategically formulated. All this only to meet his ultimate political demise domestically as the result of parting ways with Erdoğan, who has been consolidating his personal political power.

Although Davutoğlu resents the term “neo-Ottomanism,” he and Erdoğan have been the most visible faces of this popular term. In terms of foreign policy, “neo-Ottomanism” refers to the idea of Turkey becoming a major geopolitical player once again in the territories of the former Ottoman Empire—primarily the Balkans, the Middle East and the Caucasus. In domestic politics, the term refers to the restoration of Ottoman political and cultural heritage in Turkish society. In that context, Davutoğlu has primarily been associated with the former, and Erdoğan with the latter. Behlül Özkan, Davutoğlu’s former student and now his critic, even claimed that foreign policy was one area of the political spectrum that was dominated not by Erdoğan but rather by Davutoğlu, given his intellectual aptitude and other skill sets, such as his mastery of foreign languages.

Davutoğlu began his career as an academic, teaching as a professor of political science and international relations at Marmara University and Beykent University in Istanbul, as well as at International Islamic University in Kuala Lumpur. Davutoğlu has been an admirer of American academics who turned to foreign policy advisors and strategists like Henry Kissinger and Zbigniew Brzezinski. Thus, when Davutoğlu left academia and subsequently joined policy circles, it was fitting that he earned the nickname of “Turkey’s Kissinger.” Similar to how Kissinger’s academic fascination with nineteenth-century European balance-of-power statesmanship influenced his later policies, Davutoğlu’s earlier academic works were also an inspiration for him. Davutoğlu’s writings combined Islamic social and political thought with Western geopolitical classics.

This combination of Islamic and Western thought is especially apparent when it comes to Davutoğlu’s most well-known work from 2001, Stratejik Derinlik: Türkiye’nın Uluslararası Konumu (translated as Strategic Depth: Turkey’s International Position). This book has never been officially translated into English, but has nevertheless served as an ideological foundation for what Davutoğlu thought should be Turkey’s new foreign policy. Davutoğlu argued that with the end of the Cold War and the disappearance of the Soviet threat on the Turkish border, Turkey should cease to be a Western/NATO outpost. Rather, it should become an independent geopolitical player with an ambitious foreign policy. Instead of being a NATO wing state or an eternal candidate for EU membership, Davutoğlu argued that Turkey should rely on its “strategic depth” in order to become an influential geopolitical force in Eurasia.

For Davutoğlu, Turkish “strategic depth” comprises two elements: geographic depth and historical depth. In his subsequent appearances as foreign minister, Davutoğlu summed up the logic of Turkish geopolitics, making clear his notion of geographic depth: “What is the uniqueness of Turkey? . . . Turkey is right at the centre of Afro-Euro-Asia, having multidimensional characters of geopolitics. Turkey is a European country, an Asian country, a Middle Eastern country, Balkan country, Caucasian country, neighbor to Africa, Black Sea country, Caspian Sea, all these.”

At the same time, historical depth referred to Turkey’s historic legacy in former Ottoman territories. As Davutoğlu has noted, “We are. . . part of European history. But at the same time, the history of more than 20 [Middle Eastern and Balkan] countries could be written only using Turkish archives. We have more Bosnians in Turkey than in Bosnia itself, more Albanians than in Albania, as well as Kurds and Arabs. Because of these historic connections, all these countries have certain expectations from us.”

In order to capitalize on its “strategic depth,” Davutoğlu stressed that Turkey should do two things. First, it needs to prevent being bogged down by disputes and conflicts with its neighbors. Thus, Turkey should pursue a policy of eliminating or at least minimizing problems with these neighbors, which is now famously called the “zero problems policy.” Second, Davutoğlu stressed that Turkey should not rely solely on its Western partners, but should instead conduct a multidimensional foreign policy of building partnerships with a wide range of actors, both in its vicinity and globally. After the AKP won the elections in 2002, Davutoğlu became foreign policy adviser to Prime Minister Abdullah Gül, and then to Erdoğan. Davutoğlu’s foreign-policy ideas were brought to the fore when, in 2003, Turkey refused to grant the United States access to its territory for the invasion of Iraq.

Davutoğlu became foreign minister in 2009; at that time, Turkey appeared to be a globally relevant player with dynamic foreign policy that was no longer just a peripheral country of the Euro-Atlantic world. After years of tension, relations with Syria had significantly improved, and Turkey tried to act as a mediator with Iran with respect to its nuclear program. Moreover, a partnership was established with the Kurdistan Regional Government (KRG) that tied Iraqi Kurds closer to Turkey and prevented Iraqi Kurdistan from becoming an ally of the Kurdistan Workers’ Party (PKK), even at the price of tensions with the Shia government in Baghdad. Turkey was also active in the Caucasus and the Balkans through different initiatives, such as an attempt to open up dialogue and establish ties with Armenia, as well as its attempt to assert itself as a mediator between Serbs and Bosniaks on the future of Bosnia and Herzegovina.

However, with the Arab Spring, Davutoğlu’s foreign policy begun to crumble in the same place where it began: the Middle East, primarily in Egypt and Syria. “Zero problems with neighbors” meant pragmatic and constructive engagement with all Arab countries, regardless of the nature of their regimes. Despite that logic, Turkey welcomed the ouster of Mubarak by the Muslim Brotherhood because it believed Turkish influence would expand in the Arab world if the AKP were able to prove itself as a model political party combining Western political institutions and Islamic conservatism. The Muslim Brotherhood, with which the AKP had close ties, proved to be a perfect vehicle for such a task, and the Brotherhood’s presence in Syria motivated Turkey in its desire for the creation of a “Muslim Brotherhood belt” led by Turkey. This further motivated Turkey to support anti-Assad forces, in order to weaken Kurdish forces in Syria and to expand its influence in a post-Assad Syria.

This proved to be a decisive turning point for Davutoğlu’s vision, as from that moment on, Turkey went from being a country with a “zero problems policy” to a country with significant problems. In the Middle East, Turkey placed a wrong bet in almost every conflict, starting from Syria where the Assad regime managed to remain in power up to this day. In Egypt, its bet on the Muslim Brotherhood failed when the Egyptian military removed them and Morsi from power in a 2013 coup. Israel has responded to Ankara’s new anti-Israeli stance through measures such as the formation of an alliance with Cyprus and Greece. At the same time, the Iranian nuclear deal, carrying economic benefits for Turkey, relieves it of its privileged diplomatic position as mediator between Iran and the West. In Iraq, Turkey’s partnership with KRG is one with an uncertain future. Subsequently, Turkey turned out to be an unreliable ally in the fight against ISIS because it perceives the group as useful, due to its animosity toward the Kurds and Assad.

At the same time, Turkey’s position in the Balkans has always been precarious, as Turkey is perceived as a biased mediator favoring Muslim communities. The clash with Russia, whose apex was the downing of a Russian jet in November 2015, destroyed Ankara’s partnership with Moscow and additionally endangered its chance of being a big player in the Caucasus and Central Asia. The partnership with Washington was also fractured, due to differing views on how to handle the conflict in Syria, the Turkish downing of the Russian jet and American concerns regarding Erdoğan’s growing authoritarianism. In the end, as relations with Moscow, Washington and neighboring countries shattered, so did Davutoğlu’s foreign policy.

Ultimately, domestic matters were becoming complicated for Davutoğlu despite having become prime minister. As part of Erdoğan’s desire to acquire the largest possible majority and change the constitutional system into a presidential one, making Turkish politics even more susceptible to his growing personalized control, now President Erdoğan has domestically instrumentalized the Kurdish issue. He has done this despite previously negotiating with imprisoned PKK leader Abdullah Öcalan. Erdoğan reignited the conflict with the PKK primarily to boost the popularity of his party by igniting nationalism and anti-Kurdish sentiment, and to lower the electoral-vote percentage of the Kurdish parties. In June 2015, elections prevented the AKP from gaining an absolute majority, thus forcing Erdoğan to undergo new elections in November 2015. On the other hand, the ambitious but more moderate and delicate Davutoğlu disagreed with this electoral use of the Kurdish issue, and was even prepared to restart peace talks with the PKK under the precondition that they withdraw their fighters from Turkish territory.