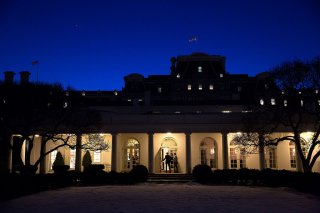 The general outlines of Trump’s foreign policy vision suggest that we should prepare for a sharp break from the past. Trump seems uninterested in pursuing either the energetic liberal internationalism or the aggressive interventionism that have defined post-Cold War American grand strategy. Instead, Trump appears ready to redefine American commitments around the world – to regional security, to free trade and to alliances.

Trump’s success, however, will depend on whether he wins the tug-of-war with his foreign policy advisers. Most are likely to be wedded to the very strategies Trump attacked during his campaign. The reason is simple: there are simply no senior foreign policy hands – on either the Republican or Democratic bench – who support Trump’s mélange of unorthodox positions on international issues.

The names floated to date — Newt Gingrich, John Bolton, Gen. Michael Flynn, Senator Jeff Sessions, Senator Jim Talent and the like — all have greater inclinations toward American engagement in the world, and military intervention in particular, than Trump. All of them supported the war in Iraq that Trump famously purports to have opposed and now calls a huge mistake. Gingrich and Bolton have both called for military strikes to destroy Iran’s nuclear program. Most of these cabinet candidates also break with Trump on the issue of Russia and Vladimir Putin and support more aggressive measures to confront China. And on the question of the Islamic State, though Trump has called for “smashing ISIS” and other tough counterterrorism measures, he has also made it very clear that he has much less interest than his potential advisors do in getting more involved militarily in Iraq and Syria. If Trump’s top advisors win the tug-of-war, American foreign policy will look very different from the one Trump sketched during the campaign.

The $64 thousand question then is who will win the tug-of-war? Both logic and scholarly research suggest a president as inexperienced as Trump is very likely to rely heavily on the counsel of his advisors. After all, Trump doesn’t just lack foreign policy experience – he has never held any government office and remains unfamiliar with the rhythms of the federal government and U.S. foreign policy.

Beyond this, Trump’s main interests do not appear to include foreign policy. During the campaign, Trump, unlike other candidates, never brought in a team of experienced advisors to help him get smart on foreign policy. And in the week since his election, Trump has mentioned immigration several times but otherwise his comments have centered primarily on domestic priorities like health care, jobs, and infrastructure. Thus, Trump’s inexperience and indifference to most aspects of foreign policy suggest that the influence of his foreign policy team will be significant.

On the other hand, Trump’s “America First” foreign policy vision clearly struck a chord with many Americans this year. Opinion polls reveal public support for Trump’s reluctance to engage in messy conflicts in the Middle East, his antipathy toward international trade, and his emphasis on domestic rather than foreign affairs. This support – not to mention his surprising election to the presidency – gives Trump the unique authority and political influence that comes with being the Commander-in-Chief. To the extent that Trump makes foreign policy a visible and public priority for his administration, it is likely to follow Trump’s more isolationist vision rather than the more internationalist vision of his likely national security team. And given Trump’s victory in the Republican primaries over candidates offering more conventional foreign policy visions, it will be difficult for his advisors to knock him too far off course.

This tug of war may not, however, be immediately apparent. Despite their general differences, Trump and his team will agree on many things when it comes to national security and foreign policy. Immigration reforms, increased defense spending, and revising the Iran nuclear deal, for example, are easy first steps that will have the support of whatever team Trump picks. And as long as Trump keeps his efforts focused on these areas of agreement, the fault lines between him and his team will remain invisible.

But over time it will become more difficult to maintain the consensus. All presidents face foreign policy challenges and crises that reveal competing camps within their administrations. Whether it is NATO calling for American support to deal with Russia, or managing Chinese provocations in the South China Sea, or responding to a deadly terrorist attack, at some point Trump will be forced to deal with issues on which he and his team have fundamental disagreements. At that point we will find out who is running American foreign policy.