The Lowdown on Central America's 'Spring' 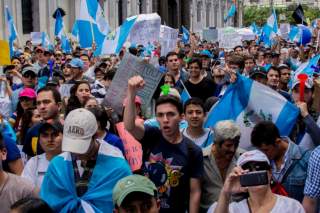 Though he had just four months left in office, Guatemala’s president, Otto Pérez Molina will not be around to hand over power next January.

Pérez Molina resigned early Thursday morning, after prosecutors issued an arrest warrant for him, and judicial officials instructed him not to leave the country. Pérez Molina will now face corruption charges related to a customs-fraud scheme that has entangled over a dozen top ministers and Vice President Roxana Baldetti, who resigned in May and is now facing trial as well. Posters extolling the ruling right-wing Patriotic Party (which Pérez Molina, a former army general, founded in 2001) are being torn down across the country’s capital.

While Pérez Molina awaits the verdict of the judicial system, joyful Guatemalans are preparing to deliver an electoral verdict when they choose a new president in Sunday’s general election.

The Guatemalan Congress’ Tuesday decision to strip Pérez Molina of immunity and the embattled president’s subsequent resignation is a historic inflection point. It’s a clear success for the tens of thousands of protesters who marched the streets of Guatemala City and Tegucigalpa alike this summer, loudly condemning the graft of Guatemalan and Honduran political elites, and the ability of civil society to demand Pérez Molina’s accountability is an important moment in the development of Central America’s democratic and participatory institutions. Leaders like Honduras’ conservative president Juan Orlando Hernández and El Salvador’s leftist president Salvador Sánchez Cerén could meet additional blowback in countries with equally systemic corruption and even more violent streets.

With the summer’s twin protests in Guatemala and Honduras, it is now de rigueur to argue that the region is undergoing a ‘Central American spring,’ a democratic awakening and a public demand for better policy to eliminate rampant corruption, reduce gang-related violence and provide the kind of growing middle-class opportunities that have become increasingly common throughout Latin America, from Mexico to Peru to Brazil, over the last two decades. Pérez Molina’s resignation will only embolden those declarations.

But the region’s democracy didn’t suddenly spring into existence in 2015. As the former Soviet Union and the Middle East have so painfully shown us, we should by now be wary of mad-lib punditry that falsely declares a rainbow’s worth of color revolutions, always overeager to set calendars to springtime. The full story of Central American governance today is one of gradual change and the development of mature political institutions only in fits and starts—it was only in 2009 that a military coup ousted Honduras’s left-wing president Manuel Zelaya. After nearly two centuries of war, imperialism and autocracy, Central America’s countries have enjoyed relative peace, democracy and full sovereignty only for the last quarter-century.

The United States shares a portion of the blame for that. In the 1920s and 1930s, U.S. industry founded quasicolonial banana plantations that pitted local political parties in Honduras against each other in a race to the bottom for special regulatory treatment and extravagant infrastructure, to the detriment of internal human rights and domestic economic development. The Eisenhower administration’s support for the 1954 coup against Guatemalan social democrat Jacobo Árbenz so destabilized the country that it spent the next four decades engaged in civil war. Throughout the Cold War, Democratic and Republican administrations alike supported despots like Nicaragua’s Anastasio Somoza and Guatemala’s Efraín Ríos Montt, the latter currently subject to a retrial of his conviction on charges of genocide two years ago. Even today, military-style U.S. drug-eradication efforts, more reminiscent of the Cold War than the Obama era, wreak lethal havoc in the region.

Only in the 1990s were most of Central America’s countries fully equipped to emerge from the shadows of geopolitical conflict, ideological strife and civil war. It would be a mistake not to acknowledge the genuine gains of the last quarter-century. Those include the development of powerful judicial checks on executive power and prosecutions and other legal steps to reduce the impunity of corrupt officials. Above all, as anodyne as it now seems, the routine occurrence of regular elections, imperfect though they may be, and mostly peaceful transfers of power, are crucial prologues to deepening civic engagement in 2015. That politics in Latin American countries like Colombia, Panama and Chile (and increasingly, Costa Rica and Panama) have become so “boring” is a sparkling compliment.

Yet, it would also be a mistake to believe that the current moment will only lead to more effective governance. Even as Guatemalans celebrate the fact that, for the first time in history, a sitting president will be subject to prosecution, they face an imperfect choice of candidates on September 6 and in a likely October 20 runoff: Manuel Baldizón, a business-as-usual politician whose party, LIDER, is alleged to be just as corrupt as Pérez Molina’s Patriot Party; Sandra Torres, a former first lady who is also part of the political elite; Jimmy Morales, a comedian and actor whose campaign is based on nationalism, social conservatism and the fact that he’s too much of a political novice to have stolen any public funds; and Zury Ríos, the daughter of the former dictator. There’s no guarantee that Guatemala’s next president will have the will or the ability to effect a more permanent commitment to transparent and efficient government.

Bad behavior, unfortunately, isn’t unknown to Guatemalan politics. Jose Serrano tried to suspend the country’s constitution in 1993; the army responded so forcefully against him that he resigned and fled the country. Alfonso Portillo, a conservative president between 2000 and 2004, initially fled to Mexico after his term ended and he was ultimately extradited to the United States, where he served briefly in prison for money laundering.

Moreover, it’s far from the first time that corruption played a role in Central American politics. In last spring’s Costa Rican election, voters were so disgusted by the scandal-plagued administration of president Laura Chinchilla that the ruling party’s candidate, San Jose mayor Johnny Araya, preferred to drop out of the runoff than face a humiliating defeat at the hands of Luis Guillermo Solís, a quiet academic and sometimes diplomat running for office for the first time. More than a year into his administration, however, opposition forces have united to deny Solís a majority in the Costa Rican legislative assembly, and Solís’ many pledges for economic reform have stalled. Though Nicaragua once seemed on the path to democracy in the 1990s and early 2000s, the conviction of former president Arnoldo Alemán on corruption and embezzlement charges paved the way for one-time Sandinista Daniel Ortega’s return to power and, with it, significant democratic backsliding. Prosecutions, convictions and elections often aren’t, by themselves, enough to transform long-standing behaviors.

The Nicaragua example also demonstrates that the region’s seven countries are not interchangeable (notwithstanding the short-lived 19th-century Federal Republic of Central America). While Costa Rica is on the verge of becoming a member of the OECD, Nicaragua languishes in Ortega’s statist cronyism. As Panama increasingly uses the wealth from its eponymous canal to transform itself into a regional financial capital, Honduras has lower per-capita GDP than any country in the hemisphere except Haiti and routinely vies with Venezuela for the world’s highest murder rate. In some countries of Central America, “spring” is brighter and greener than in others.

For a region that absorbed more than its share of U.S. attention during the Cold War and that now, according to many leaders in the region, absorbs virtually too little attention, this summer’s protests are worth noting. U.S. development, investment and electoral assistance can continue to promote greater regional stability. But policy makers risk learning the wrong lessons from a “Central American spring” narrative that puts the region into a one-size-fits-all mold that ignores the often-painful context of the region’s struggles for greater accountability and stronger governance.