The Media's Visceral Bias Against Trump 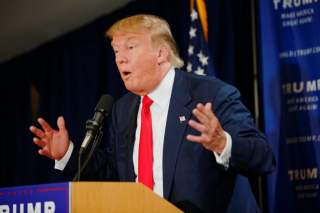 Too much anti-Trump “op,” not enough Trump policy “ed”—as in edification. That’s my big beef with some of the most prestigious newspapers in the world during this critical presidential election season.

Take of the case of the New York Times and its columnist Adam Davidson. I got a call from him several weeks ago for some quotes on Donald Trump’s trade policy. Before I could get two words out of my mouth, Davidson went on a rant about how he could never vote for Trump because of his stances on everything but trade—from the Great Wall of Mexico to Trump’s temporary ban on Muslim immigration.

So how could Davidson possibly ever write an objective column about Trump’s trade policies with that kind of visceral bias? And why does the Grey Lady condone such a lapse in, if not ethics, then certainly journalistic decorum, during a presidential race in which, quite literally, the fate of this nation may be decided?

Then, of course, there is the once unassailable Washington Post and its increasingly frequent anti-Trump diatribes. Exhibit A-plus is the shrill May 31 screed from David Ignatius propagating the Alice in Clintonland fiction that a “mercantilist” Trump “would cut deals” with Chinese President Xi Jinping “without worrying about human rights” and “put commercial interests above everything else.”

On the face of it, this is just too funny. This is because the only presidential candidate with a proven track record for selling human rights down the Shanghai River is Hillary Clinton. In February 2009, the newly minted Secretary of State stunned human-rights activists by unilaterally surrendering on the hat trick of human rights, Tibet, and Taiwan.

Proclaimed Clinton: “Our pressing on those issues can't interfere with the global economic crisis, the global climate change crisis, and the security crisis.” Chastised the Washington Post editorial board—does Ignatius read his own paper?—Clinton’s statement will “demoralize thousands of democracy advocates in China, and it will cause many others around the world to wonder about the character of the new U.S. administration.”

FYI: Nowhere in Trump’s Art of the Deal is there an instruction to unilaterally surrender all your bargaining chips before negotiations begin. However, that is exactly what Clinton did.

Now what about the “pink sheet” Financial Times? It hosts a whole slew of anti-Trump columnists who likely pray five times a day to the god of Globalism and the ghost of David Ricardo and who certainly and regularly berate The Donald for daring to question a broke-ass system of unfair trade that is crippling not just the United States but much of Europe as well.

At the too full of itself Financial Times, my favorite anti-Trump hitman is Larry Summers—the fired president of Harvard University, head of Barack Obama’s National Economic Council during the president’s first two years of utter economic failure, and one of the dumbest smart guy Keynesians you may ever have occasion to meet. Like Ignatius, Summers, too, is deliciously tone deaf to the irony of his own scribbles.

For example, on June 6, he penned a self-righteous column predicting a recession “within 18 months” if Donald Trump is elected. The irony lies, of course, in the fact that the US economy is already IN a recession, with damn near zero growth, anemic job creation, a bloated Federal Reserve balance sheet about to topple of its own weight, and a massive budget deficit that takes any further Keynesian stimulus off the table—and into the trashcan where it belongs.

My broader point, here, is this, and it is a simple one. If some of what are supposed to be the finest newspapers in the world are now regularly getting down in the gutter to heap propaganda on Donald Trump, what hope do we have for the rest of the mainstream media in covering this election in a manner less like the China Daily or Pravda and more like the American people deserve?

It’s a good question. And there are a lot of unhappy voters that would sure like to get an honest answer.

Peter Navarro is a business professor at UC-Irvine and author of Crouching Tiger: What China’s Militarism Means for the World. He is a policy advisor to the Trump campaign. Reach him at: http://crouchingtiger.net