The Media’s War against Michael Flynn 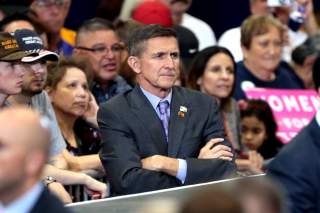 The Logan Act of 1799, which most Americans have never heard about and which has never been enforced, has suddenly become a big topic in Washington. It would be funny if it weren’t serious.

The target is national security adviser Michael Flynn. There are plenty of reasons to wonder about Flynn’s policies, most notably on Iran. But in Washington, political differences have become war by other means. What Flynn’s views are isn’t even the main issue. Instead, it’s what can be used to take him down only a few weeks into his new post.

That is why a concerted campaign appears to be taking place to tar Flynn as a cat’s-paw of Moscow. Everyone from Rep. Adam B Schiff, the ranking Democrat on the House Intelligence Committee, to the media is going on the warpath against him. The latest salvo came in the Washington Post, which focused on Flynn’s conversations with Russian ambassador Sergey Kislyak in late December. The Obama administration had expelled thirty-five Russian diplomats to punish Russia for alleged hacking during the presidential campaign.

In a February 10 article, the Post quoted nameless “current and former U.S. officials” claiming to be privy to conversations between then-private citizen Michael Flynn and Kislyak in December of last year. The FBI is reportedly studying Flynn’s conversation. The Post—and the anonymous leakers—then accused Flynn, who is now President Trump’s national security advisor, of attempting to disrupt the Obama administration’s foreign policy by “signaling” that the Trump administration might revisit the issue of diplomatic sanctions regarding alleged Russian efforts to “influence campaigns to upend the 2016 presidential race and help to elect Donald Trump.” (So botched is much of the reporting that the Post and other outlets continue to report that at Trump’s major foreign-policy speech in April he seated Kislyak in the front row. In fact, several ambassadors also attended the event. The media is seeing ghosts where there are none.)

The discussion, according to the Post, took place “at a time when U.S. intelligence agencies were concluding” that Russia may have played such a role. In other words, the discussion took place before any official findings had been signed off and delivered.

Private citizen Flynn, according to the Post, “urged Moscow to show restraint in its response to punitive sanctions,” which sounds more like a sensible observation than an attempt to undermine U.S. foreign policy. Initially, Flynn said on Wednesday that he did not discuss sanctions. On Thursday, a spokesman indicated that Flynn believes that “while he had no recollection of discussing sanctions, he couldn’t be sure that the topic never came up.” Vice President Mike Pence, among others, is reportedly unhappy with Flynn’s shift because he, Pence, defended Flynn on this issue.

But let’s step back for a moment. There doesn’t appear to be anything out of line with Pence’s moves. In effect, the Washington Post, in its ongoing barrage of anonymously sourced stories aimed at undercutting the current administration’s ability to conduct foreign policy, is accusing Michael Flynn of—guess what? Undercutting the previous administration’s ability to conduct foreign policy . . . if you can call urging “restraint” an attempt to undermine anything at all.

And even these flimsy allegations are based solely on hearsay, what anonymous “present and former officials” claim to be privy to, and choose to characterize to suit their own attempts to influence foreign policy. The question needs to be asked: what are their true motives? Is it to discover nefarious actions by Flynn or, rather, an attempt to undermine and destroy him? The answer pretty much answers itself.

If Flynn did, indeed, suggest that Russia exercise “restraint” last December, he broke no law and did no damage. He was guilty of nothing but urging calmness and common sense at a time when many partisan politicians on the Left were trying to delegitimize the legal election results and destabilize an orderly transfer of power, sometimes with street violence—an approach that they are continuing to cultivate, as far as possible.

In a free country, Flynn’s sober actions do not amount to a firing offence. Nor, for that matter, are they a cause for shame. Quite the contrary.

Aram Bakshian Jr. served as an aide to presidents Nixon, Ford and Reagan. His writing on politics, history, gastronomy and the arts has been widely published here and abroad.