The Mediterranean Is Its Own Region. Time to Treat It That Way. 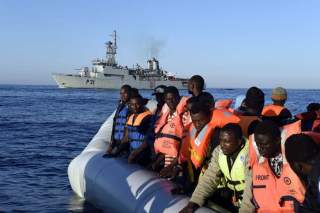 Previously viewed as a “border zone” between different regions, the Mediterranean Basin is again taking center stage. It is a primary crossroads through which people and goods, terrorists and smugglers, ideas and worldviews pass—and ground zero for the challenges facing the West today.

The post–Arab Spring breakdown of the traditional political order behooves the West to redefine the area as a distinct geopolitical matrix of its own, with reciprocal consequences emanating from each of its complex problems, each of which expresses a lateral challenge shared by several players.

The starting point of this crossroads is ISIS. Its seizure of vast territories and its ability to replicate itself by creating new branches or co-opting local organizations make it the major player in the region. The organization’s need to vary its sources of income generates massive monetary activity in the region, especially in terms of illegal smuggling. Its criminal activities and territorial conquests feed off one another: after ISIS conquers an area and loots it, it must expand elsewhere in order to ensure a continued flow of income. Expanding the borders of ISIS is therefore not only ideologically motivated—it is an operational necessity.

At the same time, the more ISIS loses its hold in Iraq and Syria, the more it must grow to resemble “classical” terrorism. It is therefore reasonable to assume that ISIS will soon make a more prominent showing in the Mediterranean Basin (specifically in Turkey, Libya and the Sinai Peninsula, where it is already operating with relative success) and before long will conduct substantive operations in Italy, the Balkans, France and Spain. This process will affect other organizations in the region, namely Al Qaeda, which will have to choose whether to try to compete with ISIS or become marginal and unattractive to potential recruits.

ISIS’s key geographical hub in the region is Libya, an area lacking a central government. From here, ISIS and similar organizations can destabilize North Africa and even parts of the Sahel. From Libya, terrorist organizations can push their smuggling routes to southern Europe and beyond, as well as threaten shipping routes in the Mediterranean. Libya may even become a training center capable of buttressing the network of terror operating in Europe. Egypt and Tunisia are also at risk, given their limited ability to seal their borders.

In the Levant (another hub), Egypt will struggle to impose its sovereignty on the Sinai Peninsula, where an ISIS affiliate is becoming entrenched and able to threaten shipping through the Suez Canal—activity that risks causing a global economic crisis. In Gaza, Hamas is facing an increasing ISIS presence, which threatens the fragile cease-fire with Israel. In Lebanon, Hezbollah views preserving tensions with Israel as a buffer against the setbacks it has suffered in Syria and growing domestic criticism of its conduct. Syria’s ports are facilitating the Russian presence in the country, while Damascus and Hezbollah themselves are allied with Iran, which is also striving to consolidate its grasp on the region.

West of the Levant, Turkey, Greece and Cyprus are not only at odds with one another, but are also struggling with the problem of refugees fleeing Syria. Turkey is facing a growing ISIS threat and is worried about the Kurds’ desire for independence and Russia’s presence in the region, thus forcing it to demonstrate greater cooperation with the West. Then there is the potential for a regional struggle over the gas reserves discovered off the coasts of Israel, Lebanon and Cyprus. Hezbollah, Turkey and Russia are also keenly interested in this issue, each for their own reasons.

The Balkan hub, already split among various national, ethnic and religious groups, could become the next front of radical Islam. The growth of terrorist and smuggling groups there could revive conflict and make the region a global crossroads for illicit trafficking and exporting jihadists.

Climate and demographics, too, play an important role in reshaping the Mediterranean Basin. Climate change (e.g., desertification, diminishing water and food sources, and the rapid population growth of North and sub-Saharan Africa) has weakened governmental control over territories and encouraged migration to Europe. These stresses serve as fertile ground for terrorist organizations making use of these lawless frontiers and exploiting local distress for recruitment purposes.

In the last hub, European nations are threatened by overlapping class, religious, political and generational polarization, the latter fueled by unemployed and frustrated millennials. To this we may add returning ISIS fighters from among Europe’s Muslim population intent on continuing jihad on European soil. Trained and equipped with weapons coming from the Balkans, they exploit the weaknesses of European democracy and the inexperience of security forces. Furthermore, the combustible mix of anti-Muslim sentiment with right-wing nationalism and racism could also provide a tailwind to those seeking to leave the EU and to groups demanding the right to self-determination (e.g., the Basques and the Corsicans).

The aforementioned hubs may have already superseded the previous model of the Mediterranean Basin as a transitional zone. But it seems that the West has yet to adjust to this change. Take, for example, the U.S. military’s unified combatant commands, which treat the Mediterranean Basin as a border between European Command, Central Command and African Command. What is instead required is cooperation among all regional players sharing the same fundamental problems, as well as an action plan treating each problem laterally rather than geographically, linking the various components as a single problem with different dimensions.

The United States, NATO and the EU must bear this responsibility, as they are the only ones with the capacity to bridge tensions among the various players—and indeed have a stake in doing so. Only they can create a network of alliances that can comprehensively confront the most burning geopolitical challenges which the Mediterranean Basin faces.