The Middle East Heads towards a Meltdown 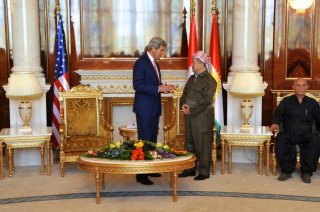 Syria and Iraq are crumbling before our very eyes, and a new protocaliphate may be emerging from the wreckage. This, however, is just the beginning. The entire region is in a state of turmoil.

Other countries have already become, or are in danger of becoming, failed states, including Egypt, Lebanon, Yemen, Libya, north and south Sudan and Somalia. Some face ongoing dangers of civil war and even of breaking apart, such as Lebanon, Libya and Yemen, while others face grave domestic crises, such as Saudi Arabia and Jordan. Jihadists are taking over lawless areas and now even entire states. The Shia-Sunni schism remains a key driver of regional tensions, as the growing role of religion in regional politics makes conflicts even more intractable. The primary forces that gave rise to the upheaval—an untenable population explosion, deep poverty and lack of economic opportunity, corrupt and repressive regimes, religious hatred—will continue to shape events in the region for decades.

The tragic truth is that no one has an answer to Egypt’s economic ills. With a burgeoning and poverty-stricken population of about 90 million, it is likely to become a failed state. Long the linchpin of U.S. policy in the region, the largest and traditionally most influential Arab state, it is unclear whether Egypt will remain a reliable ally, capable of playing a moderating regional role and committed to peace.

Saudi Arabia is in the midst of a deep succession crisis; its leaders are mostly in their eighties and nineties. It is unclear if Saudi Arabia can successfully weather the succession process, whether the king’s policy of glacial domestic change will succeed, or the entire House of Saud will come crumbling down. One of the most radical regimes domestically (albeit heretofore moderate externally), Saudi Arabia could become a radical state—one that spends excessively on what is already a large military with newfangled American weapons, exhibits the potential for adventurism and engages in a theological conflict with Shiite Iran.

Jordan has been gravely affected by the meltdown in Syria and Iraq. With approximately one million refugees from both, almost 20 percent of its total population, Jordan faces a dire economic crisis and a threat to its stability, already endangered by its growing Palestinian majority. The long-term future of the monarchy (in recent years, the United States’ closest Arab ally) and its moderating regional role is increasingly in question.

For Iran, events in Syria and Iraq carry the possibility of great gains, with both countries potentially becoming virtual protectorates, but also posing significant dangers. Iran faces a large, young and impoverished population, an opposition that has been suppressed (but is waiting to erupt again) and a deep economic crisis. Therefore, the long-term future of the regime is uncertain. Even if a nuclear deal is reached, Iran is unlikely to forgo its long-term nuclear ambitions, merely awaiting more propitious circumstances. Together with its ongoing hegemonic aspirations and millennia-long conflict with the Sunni majority in the region, Iran will continue to be a source of great instability for years to come.

In Turkey, the influence of Islam on domestic and foreign policy is likely to continue increasing, leading both to growing internal tensions and to friction with other countries that oppose its aspirations for regional leadership, including Iran, Saudi Arabia and Egypt. Turkey’s future as a leading American ally and stalwart of NATO remains murky.

Libya is in danger of splintering, tensions continue to bubble in Algeria, Morocco and Tunisia, and the prospects of Gaza truly reuniting with the West Bank appear as bleak as ever. Nonstate actors (e.g. Hezbollah, Hamas and ISIS) continue to gain power and threaten the regional order.

As for Syria and Iraq, no resolution is in sight. Syria, already undergoing the worst refugee crisis in decades, is a jihadist haven that will take decades to recover from its crushing civil war, and it is questionable whether it will even remain a united country. Likely to be a far weaker state, it will come under much greater Iranian and Hezbollah influence and may have to become even more radical to prove its Arab nationalism. A fragmented Syria is also likely to be highly destabilizing.

Iraq will probably come under even greater Iranian influence, whether it remains united or splits. Its economic growth and governmental stability will be gravely endangered by a further ISIS take-over of the oil fields, with consequences for the international energy market. The Kurds may be the only regional players to benefit.

Remarkably, if the region’s oil producers do not diversify their economies and sources of energy, they stand to become net importers, further exacerbating their economic crises and regional tensions. Iran could potentially reach a turning point in the next few years, and Saudi Arabia could do so by the early 2030s.

Israel remains one of the few economically dynamic and politically stable countries in region. They are the only vibrant democracy and the only truly reliable U.S. ally in the long term. Yet its future is overshadowed by the inability to reach a peace agreement with the Palestinians and attendant consequences for its long-term character as a state.

For decades, the United States was a leading player in the region and the primary stabilizer. Today, following its failures in Iraq and Afghanistan, compounded by the mishandling of regional developments since the onset of the “Arab Spring”, its regional influence is now at a decades-long nadir. This is not irreversible, but will require years to reverse and will severely impede its ability to influence events in the meantime.

President Obama is in a most unenviable position. He understandably wishes to avoid further entanglements in the Middle East, especially deployments of troops, and all of the options he faces are problematic. There is, however, a world of difference between wanton interventionism and total disengagement; between massive troop deployments and judicious uses of limited force. The United States must always keep it ideals at the fore, but some moderate dictators are preferable to anarchy and civil war. The United States cannot solve all problems, but also cannot afford to ignore uses of chemical weapons, mass slaughters of civilians, dire refugee crises, the collapse of allies or the emergence of radical players. The American public may have tired of the Middle East’s endless crises and dysfunctionality, but sentiment is not a prescription for policy.

Greater engagement does not promise success. Disengagement and passivity, however, have grave consequences. The only thing that is definite is that if the United States does not even try, it will have no influence over the course of events—and these events will have grave consequences not just for the Middle East, but also for the United States and the entire international community.

Chuck Freilich, a former deputy national security adviser in Israel, is a senior fellow at Harvard’s Kennedy School and teaches political science at IDC Herzlia. He is the author of Zion’s Dilemmas: How Israel Makes National Security Policy.