The Missing Element in Trump’s NSS: A Competitive Strategy 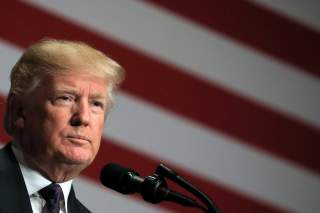 Throughout a legendary forty-year career as head of the Pentagon’s internal think tank focused on long-term strategy, Andy Marshall developed the concept of “Competitive Strategy” as the key to advancing America’s national interests in a ruthlessly competitive world of geopolitics. Marshall focused on the Soviet Union during the Cold War and contributed to Reagan’s successful defeat of the USSR; later on, he shifted his attention to China’s rise. However, all of America’s post–Cold War presidents avoided adopting an explicitly competitive strategy aimed at revisionist powers such as China or Russia. The Trump administration’s recently released National Security Strategy (NSS) strongly indicates that this is about to change.

Most of the National Security Strategies since the end of the Cold War have not designated rivals or competitors. The frequent Clinton National Security Strategies blithely saw the world in a noncompetitive light. Clinton’s 2001 NSS began “As we enter the new millennium, we are blessed to be citizens of a country enjoying record prosperity, with no deep divisions at home, no overriding external threats abroad.” The 2002 and 2006 Bush-Era NSS documents focused largely on the threat of international terrorism; the 2006 NSS identified China and Russia as “key US partners.” President Obama’s first NSS in 2010 emphasized the possibilities of cooperation with Russia and China while minimizing conflicts of interest. In a change of tone, however, the rather brief 2015 NSS was much more pessimistic about the international security landscape, stating that “Russia’s aggression in Ukraine makes clear that … the international rules and norms against territorial aggression cannot be taken for granted.”

The new Trump NSS goes much further in recognizing the return of intensified great power competition. Now the harder task for White House and Pentagon strategists already working on a rumored classified version of the NSS is to design what Marshall called a “Competitive Strategy” in response. Such a strategy essentially focuses on finding and exploiting asymmetries in long-term great power competition. The way to articulate such a strategy is to conduct what Marshall called a “net assessment” of the relative position of you and your adversary across military, economic and diplomatic spheres. What would be the elements of Competitive Strategies against an increasingly assertive Beijing and a resurgent Moscow?

The Russian Federation has increased its global political role through much the same means as did the Soviet Union: devoting a larger portion of national resources to great power competition than its competitors. Its limited economic base is a clear vulnerability as a result. Given the smaller relative size of the Russian (versus Soviet) economy, the state has become heavily reliant on energy exports. Oil and natural gas now account for 36 percent of Russia’s national budget. And Russia’s nuclear exports contracts are worth more than $300 billion dollars, representing 60 percent of the international market in nuclear reactors.

The NSS proposal for “energy dominance” will help to target this Russian dependence, taking advantage of growing American strength in the energy sector. The United States passed the Russian Federation as the world’s top producer of natural gas in 2009; Trump has consistently trumpeted U.S. liquefied natural gas (LNG) exports as a means to redress America’s balance of trade problem. Such exports also aim to challenge Russian energy strength in the European market, as Trump himself declared in Warsaw in July. But there are other opportunities too: reinvigorating U.S. nuclear exports, particularly through new government contracts to recently bankrupted Westinghouse, could also diminish Russian nuclear exports. It might also improve U.S. relations with India, Egypt, and Hungary, all purchasers of Russian equipment.

Shifting attention to China, the authors of the Trump NSS clearly believe that attempts to bring Beijing into the liberal international order as a responsible partner have failed. But demographics, sustained economic growth, and the relative homogeneity of China’s population all suggest that China’s power will continue to grow in the long-term. How could a new Competitive Strategy better protect U.S. interests in the face of China’s rise?

China’s major strategic vulnerability at the moment is its lack of allies, regionally and globally. For instance, while China’s partners in Asia and Africa have enjoyed Chinese financial largess, they have increasingly grown wary of broader strategic partnerships. Major infrastructure projects in Pakistan, Nepal, and Myanmar have been cancelled over the last year, out of distrust of Chinese motives and high-handedness.

More generally, an increasingly confident China has difficult relationships with a number of its neighbors, including India, Japan,and Vietnam. General Secretary Xi Jinping's increasingly aggressive foreign policy in the South China Sea has exacerbated some of these tensions and improved U.S. relations with a number of states. And China’s continued partnership with North Korea remains an albatross around its neck in building bridges to neighbors. America has the tools to take advantage of this vulnerability by strengthening its regional alliances while maintaining—or indeed expanding—a credible military presence in the region.

In addition, both Russia and China share another vulnerability: the nontransparent structure of their political systems. While Russia and China have seen American openness as a weakness, America has traditionally wielded it as a strength. President Putin may not remain in office after 2024, and there are no clear successors or political institutions that seem capable of managing that transition. The greatest fear of the ruling clique in Moscow remains a “color revolution” of the sort that has deposed post-Communist autocrats in Georgia and Ukraine. The Chinese Communist Party (CCP) also has an inordinate fear of losing its monopoly of power. The recent purges of the CCP and the intensification of the crackdown on reformers, NGOs, and non-Communists suggest that Beijing sees its political opposition as a major and growing vulnerability. Countering foreign news narratives and political meddling could be done with tools the United States developed during the Cold War. It might run against Trump’s political instincts, but bringing back the United States Information Agency to coordinate U.S. counterpropaganda responses could go some way to redressing American vulnerabilities and taking advantage of rivals’.

Finally, turning from others’ weaknesses to U.S. asymmetrical advantages, the new NSS appropriately highlights two key issues: “New advances in computing, autonomy, and manufacturing are already transforming the way the United States fights. When coupled with the strength of our allies and partners, this advantage grows.” These two advantages should indeed represent the backbone of a U.S. competitive grand strategy versus our rivals. But the administration now needs to do the hard work of investing economic and political capital in each of these areas to tie them together in a coherent approach for the long-term. More specifically, the uncertain status of the Pentagon’s “Third Offset” strategy of investing in leap-ahead technologies needs to be quickly remedied, while Washington’s management of alliances in key geopolitical theaters needs to be better integrated into this overall framework of competitive great power strategy.

The new NSS signals a sea change in American strategy. Making it work will require the sort of long-term thinking pioneered by Andy Marshall and the Office of Net Assessment.

Ian Ona Johnson is Associate Director of the Brady-Johnson Program in Grand Strategy at Yale University, and author of the forthcoming The Faustian Bargain: Secret Soviet-German Military Cooperation in the Interwar Period (Oxford University Press, 2018).