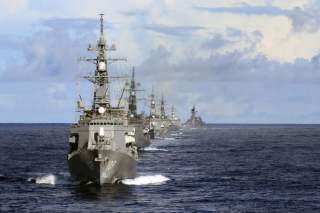 This shift would not be without costs or tradeoffs, but nor would it entail a massive military buildup or a fundamental reordering of American fiscal priorities. Stockpiling PGMs, for instance, would require an up-front investment, but their long-term operations and maintenance costs tend to be far lower than that of ships or aircraft. New technologies including additive manufacturing or “3-D printing” may enable industry to shift and scale production rapidly to meet wartime demand without maintaining inefficient unused capacity during peace. Investments in logistics capabilities such as Combat Logistics Force ships, while not “sexy” are typically quite cost-effective. If Congress could rein in spiraling personnel and health-care costs or allow the Pentagon to divest excess basing infrastructure, these investments could likely be made within existing budget targets. If not, the possibility of major, protracted war might be a powerful argument for sustaining U.S. defense expenditure near 4 percent of Gross Domestic Product.

While great-power war appears less likely in 2014 than it did in the years of perpetual crises that preceded World War I, it would be foolish to assume, as some do, that nuclear weapons or economic interconnectedness make such wars impossible. The United States appears to be entering an era in which its conventional military dominance may be increasingly challenged by a host of rivals such as China, Iran, and a resurgent Russia. Of these, China likely poses the greatest long-term threat, but even China’s stated preference is for short wars. None of these rivals, therefore, is likely to relish the prospect of a protracted conventional conflict with the United States and its allies. If the U.S. military, along with those of its allies and partners, could credibly demonstrate a willingness and ability to conduct protracted, high-intensity conventional combat operations, it would likely serve as a powerful deterrent against military adventurism. Rivals would be forced to weigh the potential gains of military aggression against the costs of a long, destructive conflict, with all its attendant risk of social, economic, and political upheaval. Ideally, this would convince potential adversaries to forego major acts of aggression or coercion. Should deterrence fail, however, the United States and its allies would be better prepared for the long and bloody struggle that might ensue.

Chris Dougherty is a research fellow at the Center for Strategic and Budgetary Assessments (CSBA) and previously served as an infantryman with 2nd Battalion, 75th Ranger Regiment from 1997 to 2000.