The Muslim World Is Turning on Hezbollah 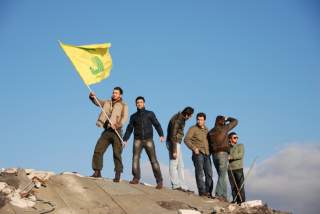 Hezbollah is currently the strongest group in Lebanon, both politically and militarily. In the past decade it has made a series of tactical decisions that yielded momentary victories. However, these victories might prove costly in the long term. Indeed, in the past couple of years Hezbollah has slowly positioned itself as a sectarian actor instead of a pan-Islamic organization that appeals to both Sunnis and Shia. This is a tipping point for the organization, and its involvement in Syria signals the acceleration of its fall from grace in the eyes of the majority of Muslims. To survive in the long run, the organization will have to execute another volte-face similar to its Lebanonization in the early 1990s.

The 2006 war with Israel was Hezbollah’s Pyrrhic victory, and in retrospect, Hezbollah’s first major mistake in a series of mistakes that the group has made over the past few years. These mistakes have alienated it from Sunnis, especially in Lebanon.

The 2006 war was the moment the group reached its zenith: it greatly raised Hezbollah’s standing in the Arab world, and the organization’s leader, Hassan Nasrallah, became a hero. Despite misgivings about the rationale for starting the war, Lebanese of all confessions rallied around Hezbollah as long as the conflict raged. Following the war’s end, the Lebanese increasingly split along sectarian lines in their support for Hezbollah. The Shia, and some Christian allies, saw the organization as having snatched victory from the jaws of defeat. For others, especially the Sunnis, the human and material cost of the “divine victory” over Israel was too high. Furthermore, the Sunnis were still reeling from the assassination of their leader, former Prime Minister Rafiq Hariri. There were suspicions that the Syrian regime, Hezbollah’s ally, was behind that murder.

In May 2008, Hezbollah made its second mistake when in a show of force, the organization invaded the Sunni areas of Beirut. The main goal in these incursions was to force the Lebanese government to retract its decision to dismantle the group’s telecommunication network. After a tense conflict, an agreement brokered by Qatar consolidated Hezbollah’s hold on the Lebanese state. Many saw this agreement as Hezbollah’s ultimate victory and a consecration of the rise of the Shia in Lebanon. However, these events also sounded the death knell for any (Lebanese) Sunni support for the group.

The third mistake was reflected in the events surrounding the Special Tribunal for Lebanon which investigates the assassination of Hariri. In 2011 the tribunal finally handed down an indictment of Hezbollah members’ involvement in this crime. The result was a protest by Hezbollah-aligned cabinet officials, leading to what many saw as an engineered coup d’état. The protests led to the collapse of the administration run by Saad Hariri (son of the slain prime minister) as he was out of the country visiting U.S. President Barack Obama. This move was seen as an attempt to humiliate Hariri and by extension his entire community. It compounded Lebanese Sunni resentment and hatred toward the Shia in general, and toward Hezbollah in particular.

The fourth and final mistake in Hezbollah’s calculus came two years later. In May 2013, the organization admitted to something that had been long suspected—its involvement in the Syrian war on the side of the Bashar al-Assad regime. The Battle of Qusair, in which Hezbollah lost over a hundred fighters, forced Nasrallah’s hand. Young Shia men were coming back from Syria en masse in body bags, and these losses could no longer be hidden. Funerals for the “martyrs” were taking place in southern Lebanese villages, and the press was aware of this fact. Ultimately, Nasrallah was compelled to admit his organization’s direct involvement which was the final nail in Hezbollah’s coffin among the region’s Sunnis and others critical of the Assad regime.

Hezbollah’s justification for taking part in the Syrian war has changed several times since this first admission. Originally, the war in Syria was presented as a jihad, with Hezbollah clerics issuing a fatwa to this effect. Then, Hezbollah transformed its rationale to a need to defend the holy shrine of Sayyida Zaynab in Damascus. Finally, the organization declared that its goal was to protect the Shia population from “takfiris” (its term for Sunni extremists).

In any case, Hezbollah’s deliberate choice to participate in the war was presented to the Lebanese Shia as an existential decision, based on the need to protect their community against those who would annihilate it. No mention was made of the axis of resistance that had united Syria, Iran, and Hezbollah for years. No mention was made of Hezbollah’s reliance on Syrian patronage, or the weapons and money that flowed to Hezbollah from Iran by way of the Damascus airport. The fight was sold to the population as self-defense against extremist Sunni aggressors.

The Syrian war thus divided the Lebanese between supporters of the Assad regime and supporters of the rebellion. Sunnis were largely sympathetic to the rebellion, as it included their Syrian co-religionists, who were in many cases family members and business partners. The Shia, in contrast, were coerced by Hezbollah to side with the oppressive Assad regime. The majority felt that they had no choice but to follow Nasrallah into the fire, but intellectuals and clerics wrote an open letter in the press in support of the Syrian revolution.

Even among Hezbollah’s own constituents, however, faith in the group’s leadership is beginning to decline. An investment scandal in 2009, in which a banker with ties to Hezbollah defrauded many Shia out of their life savings contributed to this suspicion, as did subsequent allegations of corruption, illegal enrichment, and pharmaceutical drug distribution by the family members of the party’s leaders. Hezbollah’s reputation of “clean hands” began to fall into tatters. More recently, there have been allegations that the lure of corruption has led to the penetration of the organization by Israeli secret services. The loss of the reputation for probity and impregnability is a loss of standing. Combined with the death of over a thousand fighters in Syria, and the group’s involvement there for the foreseeable future, in addition to bombings in Shia areas of Beirut in the summer of 2013, it is unsurprising to see Hezbollah’s support in the community (very) slowly diminishing.

Nasrallah’s fiery speeches and his increasingly sectarian, combative, and bombastic rhetoric have compounded the anger that the majority of the Lebanese Sunnis feel toward the group. The visceral hatred toward the Shia one hears in the discourse of Sunni Islamists is alarming. It does not bode well for the Hezbollah in the long run, nor for the Shia of Lebanon should they continue to be associated with this organization. The Shia represent only about ten to thirteen percent of Muslims worldwide. Thus, the real existential threat to the Shia does not come from a few extremist radicals, as Nasrallah has argued, but rather from the prospect of Hezbollah’s overreaction alienating the much larger Sunni majority.

While sage Shia clerics such Mohammed Hassan al-Amine and the late Hani Fahs have called for support of the Syrian revolution and for better relations with the Sunnis, their calls have gone largely unheeded. The Hezbollah juggernaut remains too strong, and while dissent is murmured in hallways, it is rarely discussed in public. Nonetheless, dissent is slowly growing.

Hezbollah’s actions prior to the Syrian war alienated it from Lebanese Sunnis, but its decision to enter the war as an ally of Assad regime also undermined its legitimacy throughout the Arab (Sunni) world, despite its attempts to make a distinction between Sunnis and “takfiris.”  In Syria itself, Hezbollah is now fully reviled among the majority of the population, and future Sunni Syrian governments will not forget its role in the war. With its recent double standard vis-a-vis the Syrian rebellion which it is fighting, and the Bahraini rebellion which it supported (at least discursively), the organization has categorized itself as a local sectarian group rather than as a unifying Arab resistance movement whose raison d’être is to fight Israel.

Hezbollah reached its apogee in 2006 and while it remains victorious on the Lebanese political scene, Nasrallah’s hubris and tendency to privilege short-term wins over long-term strategic thinking has lost him the support of the larger Arab and Muslim world. For a smart, charismatic man, Nasrallah has made a striking number of strategic mistakes on the chessboard of Middle Eastern politics. Perhaps he has been too long in his bunker fearing Israeli assassination and no longer has his finger on the pulse of the street. That distance, along with Iranian directives to tactically support Assad, are probably the reasons for his dragging Hezbollah and the Lebanese Shia into the abyss of sectarian discord, thereby risking the long-term future of his community. To endure in its thorny milieu, Hezbollah will need to compromise its hard-line stance, and adapt once again to the realities of the Middle East by reframing itself as an Arab, Islamic group, not as what some Sunnis have taken to calling the spearhead of Iranian Safavid ambitions in the region.