The Myth of the Militarization of America's Africa Policy 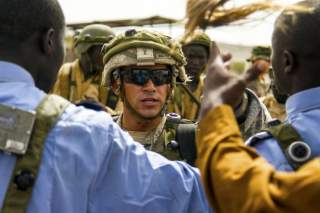 After almost fifteen years of unprecedented political stabilization and economic development in Africa, the ravages of Ebola and a spike in military coups in places like Burkina Faso and Mali are ominous signs of a continent backsliding under the weight of corruption and political conflict. Pundits and reporters in the United States are framing these events with concerns about the “militarization” of U.S. Africa policy. But the modest level of American security assistance in Africa is not to blame for recent developments in West Africa. If we learn anything from recent civil-military conflicts, it should be that Africa needs more U.S. security assistance, not less.

Since the 2008 establishment of the U.S. Africa Command (AFRICOM), alarmist voices have spun a popular narrative that the United States is blanketing Africa with military forces, and soon security activities will eclipse economic, development and humanitarian investments. This narrative also expresses concern that partner capacity-building efforts on the continent will overstrengthen military institutions, empowering them to play a dominant role in national-level politics.

Scrutiny of the actual rate of U.S. security-related spending in Africa tells a different story. In this fiscal year, of the approximately $7 billion of assistance designated by the State Department for sub-Saharan Africa, some 6 percent is security-related. In a July 2014 report, the Congressional Research Service estimated that DoD had spent about $213 million on Africa so far in FY 2014. This includes $104 million of Section 1206 funding, which serves to train and equip foreign militaries for counterterrorism and stabilization operations. A Stimson Center report from 2011 catalogued just $230 million in spending on partner militaries in Africa between FY 2006 and FY 2010, with only five countries each receiving over $25 million during that period. Compared to the billions spent on Egypt, Jordan and Pakistan, this level of resources hardly constitutes saturation of the continent.

As for concerns that regardless of its volume, security assistance risks overstrengthening military institutions and destabilizing African societies, a more detailed look at U.S. security engagement on the continent should also allay these fears.

U.S. policy makers have generally focused security assistance for Africa on developing peacekeeping and counterterrorism capabilities. Such programs are aimed at improving continent-wide stability, as well as serving U.S. interests. In this regard, concerted U.S. efforts have had some underappreciated success. From its origin in 2007 to 2011, the United States contributed over $850 million to the Africa Union (AU) Mission in Somalia (AMISOM) according to a 2012 Global Humanitarian Assistance report. Due in part to years of American training and equipping efforts, AMISOM’s African troops pushed al-Shabaab out of Mogadishu and created the space for Somalia’s first democratic elections in over twenty years. Similarly, the United States played a limited but critical role in the international response to AQIM in Mali, bolstering French and regional African forces with U.S. military airlifts and State Department–sponsored peacekeeper training.

Such efforts demonstrate the qualitative value U.S. security assistance and activities can have in contributing to African responses to security challenges on the continent. But it would be a mistake to stop at creating niche capabilities without addressing African militaries—and their relations with civilian political leadership—holistically.

The examples of the training provided to the alleged coup-leaders in Mali and Burkina Faso are instructive here. Reports are that Lt. Col. Isaac Zida, Burkina Faso’s putative officer-turned-politician, received a grand total of seventeen days of counterterrorism and intelligence training from the U.S. military. Captain Sanogo, Mali’s coup leader in 2012, had more extensive if narrow contact with U.S. military programming. Unfortunately, these two episodes demonstrate not that interludes of U.S. training are overly influential, but that they are insufficiently so.

Many African militaries are corrupt and weak, with poor human-rights records and histories of threatening democratic rule. Since 1960, Africa has experienced over 200 military coup attempts, 45 percent successfully changing leadership or government structure, according to a 2012 African Development Bank report. Rather than addressing the root causes of military politicization with proper management, some African nations instead have responded to this threat by “coup proofing” their security forces, hollowing out military capabilities and aligning the officer corps with loyalists. Such measures render countries vulnerable to domestic and regional threats and, ironically, sow the seeds of civil-military discord through institutional neglect.

It was not the Malian armed forces’ strength, but their extreme weakness and mismanagement, that led to the putsch in Bamako. If the United States and other international partners want to build military capabilities in the interests of peacekeeping and counterterrorism, they must also invest in African defense institutions. In other words, Africa needs more, not less, U.S. security assistance.

Militarization critics are right to warn about the potentially corrupting power of security assistance. All foreign assistance must be designed with appropriate safeguards to mitigate opportunities for fraud and graft, and militaries do have unique capacities to threaten governments and their people. But those who sensationalize the expansion of U.S. military engagement in Africa misrepresent the current state of affairs and offer no practicable solutions to security challenges on the continent. Boko Haram, al-Shabaab and Al Qaeda in the Islamic Maghreb (AQIM) show no desire to abandon their violent objectives. So long as the gap between these threats and African military capacity persists, it is in American and African interests to advance security-assistance policies to help build professional, capable African defense institutions.

Dane Erickson is a Lecturer at the Graduate School of Public Affairs at the University of Colorado, Denver and recently completed a yearlong analysis of political and security issues in West Africa in partnership with the Brookings Institution and a network of local research partners.

Alice Friend is affiliated with the Center for a New American Security and the Center for Strategic and International Studies, and was the Principal Director for African Affairs at the Pentagon from 2012 to 2014.