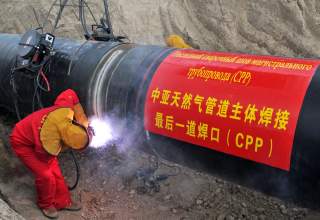 History underscores the stakes. The absence of great-power conflict in Eurasia is a recent exception to the historical rule. As the late Zbigniew Brzezinski wrote twenty years ago, “All the historical pretenders to global power originated in Eurasia.” The economic case for engagement is also firmly grounded in history. Over the past seven decades, trade and finance have been the organizing principles for Asian economic integration. While more must be done to compensate globalization’s losers, the United States has clearly benefitted from a more prosperous Asia. With global trade growth slowing, and trade liberalization stalled, infrastructure could be the next natural chapter in the region’s integration. Alongside commercial opportunities for American companies, the United States has a strong interest in ensuring that integration occurs within a framework of high standards and safeguards.

Washington is poorly equipped to respond to these developments. This is a complex competition, involving many of the world’s largest powers. Understanding it requires examining economics and security in tandem, a difficult and largely lost art. Critically, it is a structural shift, unfolding in decades rather than the days or, at best, months that represent Washington’s typical attention span.

Washington does not need a Marshall Plan for Eurasia, but it does need a strategy for shaping emerging infrastructure networks. Rather than throw public money at the region, the United States should better organize and use its current toolkit. It can begin by drawing on U.S. legal, financial and technical expertise to help develop principles for infrastructure investment in the region. These would cover procurement, natural-disaster resilience, environmental and social safeguards, and debt sustainability.

Just as important as crafting these principles is building support for them. Internationally, the United States should forge a consensus around these principles through its influence in multilateral development banks, especially the World Bank, and with like-minded partners, especially Japan and the European Union. It should reinforce these principles in the G-20 and other multilateral bodies. At home, rather than perennially threatening to defund the Export-Import Bank and Overseas Private Investment Corporation, Congress and the White House should double down on these cost-effective tools for supporting U.S. economic and strategic interests abroad.

Done right, these efforts would unleash the formidable U.S. private sector to invest in the Eurasian infrastructure story. With institutional investors managing over $50 trillion globally, there is plenty of capital looking for reasonable and reliable returns. At present, less than 1 percent of that treasure chest goes toward infrastructure investment. By providing greater certainty and expanding the pool of bankable projects, U.S. infrastructure principles would help mobilize private capital looking for higher long-term returns.

Investors and statesmen alike dread uncertainty. Even worse than uncertainty, however, is a rush to judgment. In truth, it is much too early to judge exactly how Eurasia’s infrastructure competition will unfold. But it is not too late for the United States to influence events. When the curtains fall on the twenty-first century, historians may decide whether the post–World War II order more closely followed the arc of Henry V or Hamlet. In Henry V, the protagonist secures a miraculous victory and unites nations. In Hamlet, of course, nearly everyone dies.

Matthew P. Goodman is senior adviser for Asian economics and holds the William E. Simon Chair in Political Economy at the Center for Strategic and International Studies (CSIS). Jonathan E. Hillman is director of the Reconnecting Asia Project at CSIS.

Image: Workers complete welding the last pipe links at the construction site on the steppe near the country's commercial hub of Almaty July 10, 2009. REUTERS/Pavel Mikheye