The New Normal in U.S.-Saudi Relations 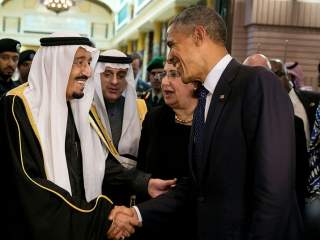 Next week’s U.S.-GCC summit in Riyadh is the last opportunity for the Obama administration to recalibrate the U.S.-Saudi relationship. While officially a multilateral summit between the United States and the six Gulf monarchies, all eyes will be on President Obama and King Salman. Both leaders will seek to project an image of comity. The photo ops, boilerplate statements and spin surrounding this encounter, however, will belie an increasingly fractious relationship. Relations are unlikely to crumble anytime soon. But unless Riyadh and Washington work toward a new understanding of what each can expect from the other, the pillars supporting the U.S.-Saudi relationship will continue to erode.

Saudi Arabia has depended for decades on the United States for external security. It is natural, given this dependence and the asymmetry in power between the two countries, for the House of Saud to fret over America’s security commitments, to seek constant reassurance of U.S. solidarity and to be sensitive to any sign that America is providing less than unconditional support.

The pique President Obama showed toward Saudi Arabia’s “free riding” in his interview with Jeffrey Goldberg in the Atlantic has thus garnered considerable attention. The normally circumspect Saudis have reciprocated, complaining, both privately and publicly, that the United States is no longer a reliable ally, that it has abandoned Saudi Arabia in favor of a dangerous and quixotic quest to improve relations with Iran, and that the kingdom’s interests are increasingly irrelevant to Washington. Against this backdrop, the fourth meeting between President Obama and the Saudi king should be seen, not as a sign of strong U.S.-Saudi ties, but as evidence that the glue that has held this relationship together has lost much of its adhesion.

To be sure, frictions between America and Saudi Arabia over specific issues are nothing new—they date back to the 1940s over the creation of Israel, and have included tense periods such as the 1973 oil embargo and the aftermath of the 9/11 attacks. But those hoping that they can wait Obama out and let his U.S. policy toward Saudi Arabia revert to form are likely to be disappointed.

Ties That Will Bend But Not Break

The focal point of this divergence is Iran. It was the second Bush administration’s response to 9/11—the 2003 invasion of Iraq—that paved the way for Iran’s reemergence as a regional force. Growing U.S.-Saudi tensions could be papered over so long as tens of thousands of American troops remained in Iraq. However, the Obama administration’s removal of these troops and the nuclear agreement with Iran have created a new dynamic in the seven-decade partnership.

At the strategic level, the United States and Saudi Arabia share a common interest in preventing Iranian hegemony over the region. The Saudis, however, have a more dire assessment of the Iranian threat and prefer to roll back Iranian influence through confrontational policies which stoke Sunni opposition to Iran and its Shiite proxies in Lebanon, Syria, Iraq and Yemen. In contrast, the Obama administration appears less anxious about Iran’s regional interference, and privileges diplomacy and engagement over bellicosity to restrain Iranian ambitions where they are detrimental to American interests.

The United States and Saudi Arabia both seek the defeat of Islamic State, but the kingdom has subordinated this interest to containing Iranian expansionism. At the same time, it continues to export its literalist, austere interpretation of Islam, a version of which also underpins Islamic State’s ideology. President Obama inveighed to Goldberg that the Saudis and Iranians need to learn to “share the neighborhood” by deescalating tensions and working to resolve regional conflicts. But Riyadh’s actions, such as the decision to execute dissident Shiite cleric Nimr al-Nimr, can appear designed to raise regional tensions and thereby to prevent a U.S.-Iranian rapprochement that might have Iran and Saudi Arabia instead “share the United States,” distant though such rapprochement might seem.

America and Saudi Arabia certainly benefit from counterterrorism and intelligence cooperation, so neither is likely to cut it off as a result of broader policy disagreements. Both countries are determined to protect the free flow of oil from the Gulf. However, the North American shale revolution and improvements in vehicle fuel efficiency have substantially reduced America’s dependence on Gulf oil imports. Saudi oil policies are rightly aimed at preserving Saudi market share, with a stated objective of flooding an already glutted market to drive U.S. shale oil and other high cost producers out of the market. The end result is that the two countries are suddenly fierce economic competitors.

While the United States and Saudi Arabia approach their summit nursing grievances, neither can afford an open break. The Saudis are too dependent on U.S. military support and still value their American connection. They will therefore avoid alienating President Obama and will stage-manage the summit to make it look successful. Obama will be looking to use his last presidential trip to the Arabian Peninsula to cement his legacy. He can be expected to privately pressure the Gulf states to refrain from steps that would undermine the Iranian nuclear agreement, while reassuring them that they can continue to rely upon the United States to provide for their external security and prevent further Iranian adventurism. The president will want to demonstrate that he understands the Iranian nuclear deal will be more secure if the Gulf states have a vested interest in its successful implementation. He will also reaffirm that, despite their differences, the United States values its relationship with the GCC and is committed to upholding the U.S.-Saudi partnership.

Nonetheless, the U.S.-Saudi partnership, once the cornerstone of America’s security posture in the Gulf, is experiencing deep structural changes. Shifting U.S. regional and global priorities, fundamental changes in the global energy market, and America’s response to the convulsions sweeping the Middle East since 2011 have engendered mutual mistrust and exposed deep fault lines.

Saudi overreliance upon American protection stunted its independence over time. With increasing doubts about America’s willingness to indefinitely play the role of regional policeman, Saudi Arabia has been pursuing a bolder, more unilateral foreign policy designed to counter the Iranian threat since King Salman assumed the throne in January 2015. This has led to actions the Obama administration has seen as impulsive and ill conceived, such as the military campaign in Yemen, though Washington supported it largely to reassure the Saudis that the United States was a reliable partner.

While the early results have been profoundly unsettling, Saudi leaders may be more likely to learn from their mistakes if the United States refrains from swooping in to bail them out. Indeed, the Saudis have been retracting and recalibrating their assertive policies in Yemen and Egypt. Elsewhere, however, Saudi missteps, such as their withdrawal of funds from Lebanon, have handed Iran influence—just as the Saudis did in Iraq by refusing to engage with the Shiite-led government.

The new normal will be a more diffident U.S.-Saudi relationship. Both sides will harbor lower expectations of each other and continue to disagree, sometimes sharply, over important regional security issues, but will seek accommodations when their interests overlap. The rhetoric of U.S. and Saudi officials notwithstanding, the two countries will not have an alliance or even a “strategic partnership” in any meaningful sense of the terms. Instead, they will have a more realistic and sustainable relationship that, shorn of its illusions and misperceptions, could produce fewer disappointments and even allow ad hoc cooperation. President Obama and King Salman should use their private discussions at the summit to begin a candid, frank and constructive dialogue over their priorities and expectations, and on how to point the needle upwards in the relationship.

Perry Cammack and Richard Sokolsky are, respectively, an associate and senior associate at the Carnegie Endowment for International Peace. Both are former members of the Secretary of State’s Office of Policy Planning.