The Next President Must Fix America's Civilian-Military Gridlock 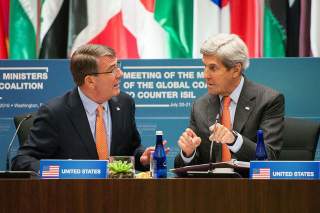 Every U.S. military officer at some point in their career will learn the basic and most quoted proposition of Carl von Clausewitz: that war is the continuation of policy by other means. Unfortunately, our civilian decisionmakers don’t study Clausewitz. The result is America’s tendency to separate war and politics into separate streams, to the detriment of both.

This tendency is long-standing. It was clearly established in World War II, where our military viewed issues such as where to end the U.S. drive into Germany essentially in purely military terms. It was equally true in occupation policy after that war, where doctrine put military goals first and explicitly removed larger political aims from planning for the military occupation of Germany, Austria and Japan. The separation of military and civilian objectives remained the case in the invasion of Iraq, where reconstituting the Iraqi state played no part in military objectives or early occupation policy.

Serious changes are overdue in how America integrates its civil and military tools. Without that, we will continue to do badly in implementing policy goals that require both instruments.

When civil-military relations work well in the field, it is because individuals are able to manage their differences. When they do not, the resulting frictions impede policy success. In Iraq in 2004, during the first battle of Fallujah, Ambassador Bremer and General Sanchez were in such serious disagreement that the military staff ceased coordinating with the civilian. Several senior American diplomats with Arab-world experience, including myself, who were sent to give political advice, could get no information on issues such as the likely length of the operation, casualties or plans. In short, we were deprived of all information on the military context essential to rendering any useful policy advice. Since the same staff was later highly cooperative, I could only put the information blackout down to an explicit decision that valued temper over national objectives.

To make matters worse, political goals often lack clarity, leading to repeated disagreements between military and civilian leaders on the ground—even if their personal relations are good.

For example, in 2012 I participated in a study organized by the Special Forces concerning the effectiveness of Afghan Local Police forces. An important question concerned forces that might fight well, but were essentially the armed wing of local leaders who could turn against the government in the future. Was the long-term stability of Afghanistan a policy goal that had to be weighed against the short-term military utility of the force? My views differed from those of some of the military representatives on the team. That mattered for our recommendations. We could find no policy statement that explicitly addressed long-term stability, and had to agree on other grounds for a short-term recommendation.

The military and civilian chains of command come together only in the president. Because only a limited number of big decisions can be taken to the president, many frictions continue for a long time. This was true not only in the Iraq case above, but also during the friction between General McChrystal and Ambassador Eikenberry in Afghanistan. In 2010, when I was on a private study trip to Afghanistan, I heard senior staffs on each side condemning the other in strong terms for lack of cooperation. Teamwork suffered. Until external issues removed one of the players, Washington let the disagreements simmer.

The repeated failure to bring the civilian and military strands of policy together has two major consequences. One is inadequate policy conceptualization and thinking. The second is tendency to construct policy only around force. Doing so reduces our political leverage by failing to recognize that force, especially in limited conflicts, can be leveraged for political purposes. As former Secretary of State James Baker said, “It’s nice to have the 101st Airborne in your pocket when you’re negotiating.”

To integrate the two means that one needs a different decisionmaking structure to deal with a world of grays where decisions are not clearly military or civilian. Such decisionmaking must occur in the field. To explain this further, consider some examples.

In Iraq, the United States does have a political conception, shared by most outside observers; namely, the need for the Iraqi government to be more inclusive in order to bring long-term stability. The battle for Mosul is military, but it is being conducted on the basis of finely tuned political agreements about the use of Kurdish peshmerga, Shia militias and regular Iraqi government forces. How those political agreements hold or fail will have as much or more of an effect on whether the battle leads toward rebuilding Iraq or creating new resentments that may lay the groundwork for another radical ideology to take root.

Military force can be held back to pressure political change, or accelerated to reward it. But this comes with dangers. Too much holding back may lead to battlefield loses. A purely military approach may mean the Iraqi government or the Kurds can ignore us and default to the many other political pressures and desires they face.

Decisions about how to use military force will often be difficult. Professionals will disagree. If the decisions all have to go to White House committees, we will remain slow, awkward and frequently unable to keep up with the pace of events. And if the two are not integrated, the decisions themselves will be harder and take longer.

Syria provides an example of the problem of separating political and military concepts. The result is a policy conception inadequate to the totality of the challenge. This also raises the issue of distinguishing strategy from policy. How often does the public discussion of correct strategy in Syria become one of whether to use more ground forces, and how much? But strategy is a means of achieving a goal. The strategy may change according to circumstances, while the goal remains constant.

If our goal is only the destruction of ISIS, it raises the question of what comes next—how is Syria to be stabilized so that one war does not just follow another, with another radical movement replacing Islamic State? If the goal is inadequate to the need, then no strategy will be adequate. At present, that seems to be the case.

Hence, the questions of whether and how to arm the opposition, who to arm, and how to work with the many other players in Syria churn endlessly, because we have not settled the most basic question of policy.

The Russians have provided an interesting example of integrating military force for a political purpose, in this case keeping the Assad government in power and maintaining Russia’s key bases in Syria. With a comparatively small injection of force, Russia has changed the complexion of the war: Assad is not losing, any negotiation will have to deal with a strong Syrian government with foreign support and any American military engagement must now consider the risks of conflict with Russia. That is a lot of change in the political situation for the deployment of less than one hundred aircraft. I am no admirer of Vladimir Putin. I cite Russian actions only to illustrate how the integration of force can work for political purposes.

Because we have no larger political policy that would try to integrate our goals with those of Turkey, Saudi Arabia and other states involved, we find ourselves in an endless balancing act, plugging along without adequate goals. Such integration of a political objective has to precede individual military decisions. It would probably involve difficult compromises—but that is the function of policy.

If the difficult decisions that come with integrating civilian and military tools are to be made with any chance of effectiveness, then the chains of command must be brought closer together in the field. Only by forging policy goals first and then integrating our political and military powers can we guide strategy formulation and bring together the use of force with the purposes for which we employ it.

The integration of powers could be done by increasing ambassadorial authority, as I recommended in 2014 together with Admirals Dennis Blair and Eric Olson. It could be done by making the military command responsible for the full discharge of political goals. In this case the ambassador would be subordinated to the military commander. Perhaps some other form of special envoy with military and civilian powers could be designed, modeled on the early post-Dayton political representative in Bosnia.

What cannot work well is a continuation of the chaotic and divided command, micromanaged by a National Security Council that proceeds to address fast-moving situations with slow-moving committee decisions. While our current way of operating may be a substitute for giving clear policy direction, including limitations, to a trusted subordinate, it has not proved that it can deliver effective results.

All this is about what may be called operational art. It is value neutral. It does not assure that policies will be rightly or morally conceived. What it does assert is that without getting our act together, even well and morally conceived policies risk being incompetently executed. And given the strongly entrenched habits of our cabinet departments and bureaucracy, only a major effort of reform led from the top will have any hope of changing our counterproductive, but very well established habits.