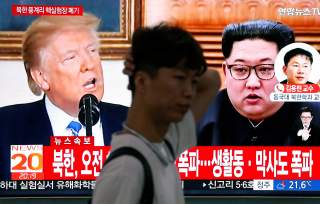 Maybe the summit is not too big to fail.

The May 24 announcement and presidential letter stamps “Cancelled” across the theater posters on the Singapore summit mooted for June 12. Maybe it is, but we’ve seen a lot of pre-summit maneuvers to establish negotiating leverage. Maybe this is just the latest in a series of negotiating ploys and hype tactics to capture media hits.

If it is cancelled, what’s the effect? Well, not much changes. But it does offer a good time for the United States, our allies, and our friends to consider some new policies and strategies.

Kim Jong-un understands the power, the leverage, of nuclear weapons and other weapons of mass destruction, including cyber. Regarding nuclear weapons, their high value resides in their potential. “Use” is worse than useless—it would be disastrous.

With his nuclear weapons capability, he gained three summit meetings: two with China, one with South Korea and perhaps one with the United States. Kim wants nuclear weapons. He wants North Korea to be treated as a nuclear weapons state. And he wants to play the large powers off against each other. He particularly wants to weaken American ties to Japan and Korea, decrease U.S. presence and he wants to unify the Korean Peninsula on his terms.

In the near term, he intends to enter prolonged discussions over nuclear weapons with the advantage, and to structure talks in the manner established in the Nuclear Non-Proliferation Treaty discussions. One goal he has in mind is to change the subject from denuclearization to U.S. military exercises, the U.S. threat and the U.S.-ROK alliance. North Korea’s stated position has been “de-nuclearization of the Korean Peninsula,” defined as applying to all nuclear-capable forces on the Peninsula. (It’s not hard to determine who that is.) This requires concessions on U.S. forces in Korea and Japan

The basic nature of the North Korean regime remains unchanged, and it is impossible to change that nature without regime change. It is a particularly enduring totalitarian state, existing solely to serve the Kim family regime—that is to say, the Kim family and approximately one million or so core supporters who must be kept satisfied. The nation of North Korea—the population—is in reality hostage to the regime.

North Korea survives through sovereign criminality, or criminal sovereignty as you prefer.

North Korea’s Central Committee Bureau 39 is an active participant in the criminal economy of the region, with tentacles extending well beyond Asia. North Korea’s global presence, overt and clandestine, generates resources to provide critical funding streams for military programs and regime supporters. Illicit enterprises include nuclear proliferation for profit. North Korea organizes its illegitimate activities behind the shield of sovereign immunity and military coercion while using the tools of the state to perpetrate these schemes abroad. Therefore, the Kim family regime is not subject to the usual incentives, threats and blandishments of conventional diplomacy.

China has its own set of vital, or core, interests in North Korea. China wants a unitary Democratic People’s Republic of Korea on its border, and North Korea’s weapons are a means to that end. China remains North Korea’s strongest trading partner—perhaps a point of high leverage. China would welcome any collateral damage to the U.S. alliance structure. Many assume that backing away from sanctions on ZTE, and backing away from an “easy to win” trade war, are a quid for China’s support.

Human rights in North Korea complicate matters. It’s hard to see how the ROK and DPRK could reconcile with no consideration of human rights. The landmark report of the United Nations Commission of Inquiry in 2014 concluded that “systematic, widespread and gross human rights violations have been, and are being, committed” by the North Korean state against its own people, and that “in many instances, the violations of human rights…constitute crimes against humanity.” Political penal labor colonies holding at least 120,000. Victor Cha of CSIS and our first nominee to be ambassador to the ROK, estimates at least one million have been killed in these camps. Kim knows we know this. He must have questions about how long can we be expected to ignore this if he gives up his weapons.

Maximum pressure sanctions dominate many discussions. By definition, effective sanctions cut off resources Kim needs to keep his core supporters on side. This promises to change regime behavior, and therefore brings the hazard of regime change. And when a regime changes, we might get something worse. Heretofore, the United States and our allies have been unwilling to force regime change.

Only two possibilities exist: sanctions tighten or loosen, but never remain static. This is not a “declare and forget” option. Effective sanctions require constant work to eliminate leakage. It’s whack-a-mole on a global scale. We’re not operating against an inanimate object—we’re opposed by mendacious, astute and inventive adversaries operating within a worldwide criminal network.

Each U.S. administration since 1991 has applied sanctions and declared that “this time they will be effective.” Most recently, North Koreans attending the Winter Olympics included sanctioned individuals. Yet Kim won the charm event. Recently, China increased its crude oil exports and accepted more North Korean female workers after the second meeting between Kim and President Xi Jinping. Both of these were violations of existing sanctions. And yet preparations are underway to export coal to China below market price.

After June 12, summit or no summit, the issue will remain. Allies and friends, and China, will need to see that our security guarantees are real and not merely rhetorical. National leaders of Korea and Japan must be able to show their constituents that positive, effective actions ensure their safety.

Strong deterrence is the available insurance policy. It must be credible, and must present an undoubted ability to prevail, to protect the territory, interests, and lives of allies and friends

Annihilation has been the premise of our nuclear deterrent—this is deterrence through threat of punishment. Needed also is deterrence by denial, creating overwhelming doubt that an attack by Kim can succeed. Immediate efforts are needed to achieve boost-phase intercept of ballistic missiles, over North Korea, reliable detection and targeting of cruise missiles, and enhanced anti-submarine warfare capability to track North Korean submarines.