The North Korea Summit: Is It Back On? 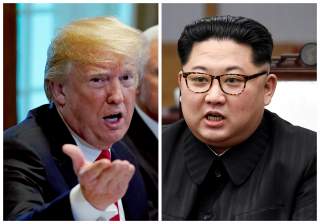 Harry Kazianis recently wrote on how Trump can prevent getting played by North Korea. An excerpt of the article can be found below:

There are moments when a person must stare into the abyss to see the possibilities—or perils—of the choice before him. In many respects, that could be the simplest of explanations as to why Kim Jong-un has offered, and President Trump has accepted, to meet to negotiate what could be the greatest diplomatic opening since Nixon went to China in 1972.

We are a long way from such a moment. Just because Kim has offered to sit down and talk to President Trump and discuss denuclearization doesn’t mean that peace is at hand on the Korean peninsula. Far from it.

In many respects, what North Korea is doing is throwing the ultimate Hail Mary pass—and Donald Trump is 90 yards downfield with three all-start cornerbacks defending him.

But history tells this likely isn’t the diplomatic equivalent of a David Tyree moment, the moment when the New York Giants receiver hauled down Eli Manning’s pass to win Super Bowl XLII. The cold, hard truth is that North Korea has offered talks followed by months and sometimes years of fruitless efforts to drive towards a bargain many times in the past. All the while, Pyongyang’s nuclear weapons and missile arsenal improves a little more every single day. There is no reason to think Kim Jong-Un is just dusting off the old North Korean playbook—again.

If talks were to fail, and that is a very distinct possibility given the lack of mutual trust, decades of hostility and the simple fact that North Korea’s nuclear weapons are its true only trump card—no pun intended—it will likely stem from the fact that each side approaches them with wildly different sets of starting points for negotiations. Washington and Pyongyang will blame the other for failure, and we could very well go back to the same set of conditions that brought us to the brink of war last year, or worse: missile and nuclear tests followed by threats of a military strike. Indeed, the diplomatic fallout from a collapse in talks could be so severe that Trump may feel politically he may have no choice but to strike with all the fallout—geopolitically as well as atomically—that comes with it. The stakes are thus very high indeed.

How to avoid this dire scenario?

In my view, there are five things Team Trump must do.

First, we must ensure we have a clear understanding with South Korea as well as Japan about our collective diplomatic redlines. What sort of deal is acceptable to Washington but also South Korea and Japan, two nations that due to geographic proximity must live with such a deal? All three capitals must be on the same diplomatic page for talks to succeed.

Next, the meeting can only take place in one place: South Korea, with the best option being in the stark setting of the Demilitarized Zone. Here is where Trump must avoid a clear trap by Kim, as he is likely to demand the meeting be held in North Korea—the optics proving he has defeated his imperialist enemy for good. No way. Trump would risk legitimizing a tyrant who has 100,000 or more of his citizens imprisoned in a modern-day Gulag and who had his own brother murdered with VX gas, not to mention countless other sanguinary acts against members of his own regime. If North Korea demands the talks take place on Kim’s home court, Trump must refuse.

Third, Trump must explain to Kim that there will be no letup in planned U.S.-South Korea joint military exercises, especially the Foal Eagle exercise, later this month. Sovereign nations and allies have the right to train their forces, just as North Korea did all winter long. If Pyongyang demands these exercises being cancelled, Trump once more needs to hold firm.

Also, for talks to commence, North Korea must detail a preliminary roadmap as to what it would offer in terms of denuclearization. If Pyongyang refuses to offer even the faintest idea of how it will eliminate its nuclear weapons, and it looks like Kim is just playing for time, Trump needs to decline his invitation.

Finally, and most important, the maximum pressure campaign initiated by Trump, which is surely the reason the Kim regime issued its invite, must not be deployed as a bargaining chip to ensure that Kim actually meets with Trump. If the North makes any economic demands for the simple pleasure of a meeting—something it has done time and time again—then we will know that North Korea is simply trying to weaken the sanctions regime without making any concessions.

If Trump remains tough, he will know quickly whether Washington and Pyongyang can truly make history—or whether they are on a path to armed conflict.