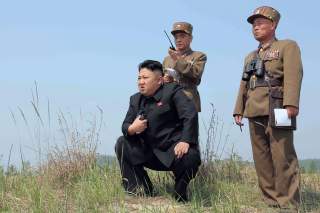 Editor’s Note: This was delivered as The William Perry Lecture at Yonsei University in Seoul in October 2017.

If war breaks out in Korea over the next few weeks or months, no one would or should be surprised. That is a fair definition of a crisis situation, and that is what we have now.

Crises in international affairs typically have underlying causes linked to deep differences of some kind, be they religious, ethnic, territorial, systemic or structural—as an international political theorist might say—or some combination of these. They are the “pre-existing conditions,” on top of which comes some incident to ignite the fire, making for the urgency of crisis. In recent decades, think of India and Pakistan—the Hindu-Muslim divide and incidents in the disputed geography of Kashmir. Think of the Arab-Israeli conflict, Islam and Judaism, and the status of Jerusalem and Palestinian territory on the West Bank. Think of Bosnia, Serbia and Croatia in the Balkans, Greece and Turkey in Cyprus, or even of the U.S.-Soviet Cold War that erupted into crisis over missiles in Cuba.

Now consider the United States and North Korea. What is the pre-existing condition? It is not religious. If it is territorial, going back to 1950 and the North’s attempt to alter the manufactured division of the peninsula, it has not been seriously contested for a very long time, and neither side admits to this as the outstanding issue today. And while our political and economic systems are quite different, coexistence would seem to be easily attainable. Indeed, America’s secretary of state recently sought to reassure the North by saying, essentially, that the United States had no need to change the government in the North, almost assuring the DPRK that our abhorrence of their totalitarian government and human rights practices need not be an obstacle to peaceful relations.

No, the pre-existing condition, from the American perspective, seems to be the development of nuclear weapons by the North and, because of those weapons, ballistic missiles too. That is what focused the minds of the “Principals” in the U.S. government in 1994 during the first North Korean nuclear crisis, not the North’s belligerent rhetoric, its system of government, its provocations or even its artillery arrayed along the DMZ. As then Secretary of Defense Bill Perry said in a key Principals Meeting at the time, “We’ve lived with all that for a very long while. What we need to do now is to stop their program to produce plutonium for nuclear weapons.” And we did—for a decade.

But North Korea ultimately got nuclear weapons, testing them five times over the administrations of Presidents Bush and Obama. Over the same period they ultimately attained medium and intermediate range ballistic missiles so that they could deliver those weapons against targets in the western Pacific Ocean, including Japan, South Korea, and U.S. territories and assets in that region.

It is instructive to note that North Korean success with nuclear weapons and ballistic missile development did not immediately spark a crisis. Successive administrations in Washington condemned the North’s progress, sought and got sanctions from Congress and the United Nations, but did not suggest that preventive war was on the agenda. The United States was content, and our allies in Seoul and Tokyo too—but presumably somewhat less so—with the extension of the American deterrent to address the vulnerability of the Republic of Korea and Japan to the growing North Korean nuclear weapons and ballistic missile capability. Yes, the United States maintains a multilayered ballistic missile defense in Northeast Asia, but it is not “leak proof” against a determined foe with a stockpile of missiles. And leakage is a very bad thing when dealing with nuclear weapons. So U.S. allies have lived with no real defense against North Korean ballistic missiles, relying instead on deterrence extended by the United States to meet their need for security.

The spark that threatens to ignite the dry kindling of the North Korean situation, and thus creates the current crisis, is the emergence of ICBM capability which the North intends to mate with nuclear weapons. Doing so would make the continental United States vulnerable to attack by the DPRK. True, the United States has been developing a ballistic missile defense for the homeland, but it is not now, nor will it be anytime soon, ready for prime time. That leaves the United States depending on deterrence—the threat of a punishing retaliatory strike—for its security, just as our allies have been relying upon our extended deterrent for their security, for more than a decade. This, the president has indicated via tweets and other means of communication, is unacceptable for the United States.

To be fair though, it is not as if the United States simply has a higher standard for its security than the one it has been prepared to settle for to meet allied needs. After all, the credibility of extended deterrence has long been understood to be put at risk by the vulnerability of the guarantor—in this case, the United States—and so North Korean ICBMs also newly threaten American allies by virtue of their threat to America. The deterrent calculation often used to capture the situation goes to Washington’s willingness to put an American city at risk to protect an ally—to trade San Francisco for Seoul, one might say.

The credibility of the deterrent threat then is one element in the calculation of the effectiveness of deterrence. Other factors are the risk propensities and level of damage that the object of deterrence is prepared to accept. Is the leadership in North Korea, for example, suicidal? Note that the question is not whether or not the DPRK is led by some who are homicidal or even irrational in some matters, but whether or not survival of the nation, the regime and perhaps themselves are valued enough to discourage an attack which would provoke devastating retaliation.

While the relevance of all this to the DPRK is new for the United States and its allies, it is not new for the United States in the case with other countries and other allies. The United States has been vulnerable to Soviet, and eventually Russian, ICBMs for fifty years or so, and to Chinese ICBMs for almost as long. The United States has depended upon deterrence rather than defense to meet its security needs against threats from these countries—threats that were and are orders of magnitude greater than any that might be posed by North Korea for decades to come. And America did this while assuring its allies in Europe and Asia that U.S. vulnerability would not undermine its commitment to their security—that is, it maintained the credibility of its extended deterrence. This has been the U.S. posture for itself and its allies, notwithstanding concerns about the rationality and risk propensities of the leadership in the Soviet Union and China, particularly in the darkest days of the Cold War.

Negotiation, for example, has been likened to submission to blackmail and appeasement. It has been termed a failed policy, pursued out of naivety by those duped by the North. The North is said to have cheated on the deals, which have cost billions of dollars without any positive results. Most recently, we learned that the DPRK “understands only one thing,” and therefore pursuing talks is a waste of time.

And while at times it has sounded like U.S. leadership was, therefore, considering a preventive military strike to end the emerging threat to the continental United States, other voices coming out of Washington have warned that there is no good military option either, that Seoul is held hostage by North Korean artillery deployed in caves along the DMZ, and that both Seoul and Tokyo are now hostage to the North’s ballistic missiles and nuclear weapons.

When, in the past, neither negotiations nor military action was judged desirable, the United States fell back on some version of containment. But this is now regarded as inadequate too, since containment will not contain the North’s emerging ICBM capability and prevent American vulnerability.

The favored option now appears to be much tougher bilateral and international sanctions, enhanced by China’s active participation in their implementation. Depending on the advocate, this will stop the North’s ability to pursue its weapons programs, or bring the regime to its knees or the negotiating table, or cause the collapse of the regime.

One might ask, “What’s wrong with this picture?” The answer is that there is, in fact, a great deal wrong with the way the United States has defined the current challenge from North Korea and the options for meeting it.