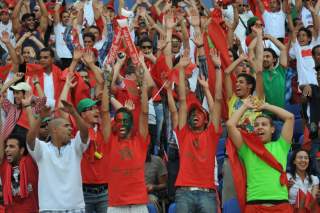 The remarkable video below shows a group of Moroccan Jews from Israel singing and dancing in front of police checkpoints at the King Mohammed V airport in Casablanca, upon their arrival from Jerusalem. They had come to make a religious pilgrimage in the region of Ouarzazate. The comfort level of a group of Jews in religious attire in an Arab country, literally dancing through the metal detector, is both moving and telling. Morocco has enshrined the rights of Jews into its constitution. Moroccan Jews of the world, including in Israel, routinely express a feeling of deep attachment to their country of origin.

The merits of the kingdom's constitution, ratified overwhelmingly by the population in a 2011 referendum, go beyond the country's Jewish community. While consecrating the popular sovereignty of the king, it also transfers most ministerial responsibilities to an elected Chief of a Government. It affirms the sanctity of human rights, equality of all before the law, and freedom of expression. It also consecrates the virtue of preserving the environment, a responsibility to be shared by the monarchy, the state, and the population.

With respect to human rights and the equality of Moroccan citizens, the constitution is not merely aspirational: It reflects a social reality, painstakingly nurtured by the present king since he took the throne in 1999. Among his first dramatic moves was to set in motion a process of equity and reconciliation, whereby the suffering of elements of the population at the hands of the security services in prior decades was acknowledged and redressed. The Moroccan experience of transitional justice has become a model which other countries in Africa and the Middle East have begun to apply to their own societies.

Thus the outstanding—and widely acknowledged—political gains which Morocco has registered are not a child of yesterday but rather the result of a long and gradual process. That process is not over: It moves forward, in the manner of so many human endeavors, with occasional fits and starts as well as periods of rapid acceleration. At its finest moments, it is a process in which the state, as well as members of the society in all walks of life, partner for the common good.

When a developing country takes such measures and registers manifest results, its leadership and people hope for acknowledgment and support from the developed democracies of the West with which it is allied. But from the present administration in Washington, Morocco has encountered the opposite. The most recent manifestation of apparent ill will was the release of a human rights report by the U.S. State Department which was outrageously and demonstrably inaccurate. A few days ago, the U.S. Ambassador to Morocco was summoned, and confronted with documentation of substantial factual mistakes, some of which can be verified through a mere survey of international reporting on the country. The kingdom awaits the U.S. Government's acknowledgment of error.

Looking ahead, both parties' frontrunners in the American presidential campaign appear to be conveying a desire to change course in foreign policy, though the details are as yet unclear. America's ability to garner goodwill and play a positive role on the world's stage depends on the next administration's success at doing so. The Obama administration's policies toward its traditional allies in the Arab and Muslim world—sometimes neglectful, other times cavalier—has been a failure, playing into the pathology of terrorism and among the causes of state collapse in Libya and beyond. And with respect to Morocco, rather than recognize and support the country's remarkable political and social reforms, the Administration has used a combination of hyperbole, fixation on isolated error, and pure falsehood to condemn the country and alienate its people.

To argue for a course correction is not to argue against a nuanced foreign policy or critical dialogue as a component of American-Arab relations. But it is to echo the views of so many in the Washington policy community that the present state of affairs is untenable—damaging to the United States, its allies in the region, and global security.