The Obama Way of War: Special Ops, Syria and History 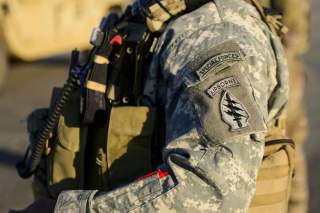 No respectable historian will find much to admire in the president's legacy as foreign policy and national security leader. Still, they may well bicker for many years over why he does what he does.

The White House recently announced special operations forces are going into harm's way in Syria. That choice may be one of the defining moments historians seize on to understand the Obama way of war.

Getting on the Ground

What to make of this decision? For starters, dispatching a small number of special operations forces into Syria to help handle ISIS is hardly a game changer.

Special operations forces are called "special" for a reason. In part, the handle reflects that these troops have special training and equipment, and conduct unique military missions. Their impact, however, is also considered "special." They deliver a unique "temporary" advantage, whether it’s rescuing hostages, hunting SCUDs, training a freedom fighter or taking down a terrorist. A special-ops “mission accomplished” delivers either a quick and passing win (like getting bin Laden) or an essential preparatory act for a larger campaign (such as harassing Japanese supply lines in Burma during World War II before the Allied counteroffensive).

This is all well-explained in “Spec Ops: Case Studies in Special Operations Warfare, Theory and Practice,” which the Washington Post calls the book that spec ops forces read to understand spec ops. Written by now-retired Admiral Bill McRaven, the former head of Special Operations Command, it’s a treatise on the principles of special operations warfare. And the White House hews about as closely to the tenets outlined in this book as addict sticks to abstinence.

There are no signs that the administration has a serious strategy for strangling ISIS. So it’s not clear that these special operations for a preparation for any step other than seeing out the end of the president's term in office.

Nor can special operations scale up to solving the problem by themselves, any more than a handful of brain surgeons could quash a pandemic.

For the U.S., breaking ISIS’ territorial control in Iraq is the vital strategic mission in the region. That will require a much heavier lift than what the White House is willing to undertake. Instead, it has merely added a few more pins to its pin-prick strategy.

More and more, the administration's announcement looks like a military bridge to nowhere.

The Man Behind the Curtain

Perhaps someday, when administration insiders pen their memoirs and historians get to cull through Obama's emails, more definitive judgments can be made about the rationale behind the president's calls as commander-in-chief. Until then, it’s worth musing on his motivations—if only to suggest dark paths that the next president would do well to avoid.

One reason presidents conduct clandestine operations is because they can. They deliver a sense of empowerment, the feeling that the Oval Office isn't helpless. Knowing the difference between a suitable, feasible and acceptable course of action and just "doing something" is the art of presidential decision making. Dwight Eisenhower was the father of using special warfare as a tool of the modern presidency. From psychological warfare to direct action from the newly established National Security Council, he directed all kinds of dirty deeds. Yet Ike was usually shrewd enough to abandon bad ideas when it was clear they were bad (like when he created and then canned an idea to arm stateless East Europeans during the Cold War). In contrast, Jimmy Carter embraced a truly Hail-Mary idea to rescue U.S. hostages in Iran—a last desperate act to solve a tragic and humiliating problem.

Incrementalism is another reason to opt for special ops. When presidents become extremely risk averse, they may choose an incremental use of force in the hope that they will dole out just enough to get the job done—or at least make the effort look presidential—without putting too much at risk. Using force in this manner is not prudent; it is acting out of fear. This was Lyndon Johnson's way of war in Vietnam. He wanted to be credited with being tough on the Communists. He didn't want to lose, but he also didn't want to risk a big war. So Johnson kept adding a little more on to what Eisenhower and Kennedy had done to help South Vietnam, sending over a few more special forces at first, then some regular forces. In the end, he led America into a big war anyway, with no real idea how to win it.

Misjudgment also explains why presidents sometimes do what they do with special operations forces. President Obama thought he could defeat a global Islamist insurgency with a global campaign of clandestine operations, primarily drone strikes. Perhaps he really thought this might work, but there was always plenty of reason to be skeptical. This wrongheaded decision has cost America and its allies dearly; Islamist terrorists control far more territory, people and resources today than when Mr. Obama took office. And now, in addition to inciting terrorist activities worldwide, they are driving hordes of refugees across Europe.

Whether out of hubris, fear or lack of competence, Mr. Obama has elected to take a meandering middle course. But that is nothing new for his policies in the Middle East. In the end, adding special ops to Syria isn't anything new. It’s not even really newsworthy, other than to remind that brave soldiers are once again going in harm's way on our behalf. Let's hope their missions are worthy of the risks we ask them to take.

A Heritage Foundation Vice President, James Jay Carafano directs research at the think tank’s Davis Institute for National Security and Foreign Policy. You can follow him on Twitter: @JJCarafano.