The Only Way to Save Ukraine: Federalization 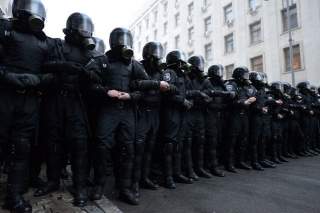 It is easy (and perhaps necessary) to dismiss the vote on Sunday in Donetsk and Luhansk due to its sloppy, seat-of-the-pants feel, but it is hard to deny that “something” has happened. The referendum’s true objectives—to further reduce Kyiv’s legitimacy in eastern Ukraine and to create a new de facto reality on the ground—have been met. Watching this weekend from the outside, southeast Ukraine looks increasingly anarchic and ungoverned—a place where only gunmen hold sway.

The events in Ukraine shed doubt on President Putin’s willingness and capacity to de-escalate the crisis, not to mention the fate of a brief diplomatic foray launched by Swiss Foreign Minister and OSCE Chairman-in-Office Didier Burkhalter. It also demonstrates the effectiveness of Moscow’s tacit campaign of trying to destabilize Ukraine from within. But local conditions, the breakdown of traditional institutions, and dissipating trust enable destabilization. If any side is going to be able to achieve its objectives, it’s Russia. That’s because it has one: federalization.

Ukraine’s government is in a weak position to flush out pro-Russian separatists without heavy fighting and bloodshed. Law and order is disappearing in Donetsk, and Kyiv has been unable to provide a reliable police force even in the capital. Military operations in southern and eastern areas are contributing to a dangerous lack of trust between the Kyiv government and law enforcement organs.

The cycle is by now familiar: the ongoing conflicts between local oligarchs and politicians loyal to the interim government in Kyiv are aggravated by Moscow’s sway over Ukrainian law enforcement agencies. That, in turn, hurts the willingness of law-enforcement officers to provide basic security for the population. Weapons are abundant, and the number of militias is growing. The announced relocation of the Right Sector ultra-nationalist group to Dnepropetrovsk and the alleged fatal shooting of at least two unarmed civilians by Ukrainian irregular forces on Sunday in Kramatorsk calls into question Kyiv’s capacity to live up to its Geneva commitments on disarming paramilitary groups.

What Ukraine suffers from the most are internal divisions fueled by a generational gap: the young and better educated want to build a new, Western-oriented country, the older generation values Russian-level pensions, and the oligarchs desire business as usual. Russian pressure makes it hard, if not impossible, to resolve these tensions.

Despite the glare of Western news media, “separatism” in eastern Ukraine is actually a rather isolated business. The ongoing antiterrorist operation may keep it in check and the general public’s reluctance to be drawn into the separatist camp is still obvious. In other parts of the country, especially in the central and western regions, Ukrainian society shows a high capacity for mobilization and self-organization.

Erosion of central authority opens the way for Russia’s main enablers: e.g., electronic media, security (Russian troops massing at the border, special forces and intelligence operatives) and social protection (e.g., Russian-level pensions). The self-identification of Russians in Ukraine is starting to be called into question. The tragedy in Odessa provides a powerful incentive for those who conceivably might want to see Ukraine break up if violence continues.

Ukraine remains deeply divided, and the West is scrambling to keep up with an unpredictable and jarring pace of events. Washington and Brussels are less likely to be able to provide effective help for an incapacitated or passive central government. The May 25 presidential elections could still be a game changer, but the risk of further escalation and an increasing lack of enthusiasm about the presidential vote in eastern Ukraine makes this hope thinner by the day.

It may all come down to economics. The bottom line is that Russia is the only united actor enjoying strong popular support. Putin’s approval ratings are at a near-record 82 percent, with nearly 60 percent of Russians believing the country is headed in the right direction, despite the effects of an economic slowdown and Western sanctions. Russia is buoyed by the Obama administration’s limited capability to deter or blunt the Kremlin’s nimble moves inside Ukraine, near-continuous European disunity over the proper response to the crisis, and a worrying, ineffectual Germany.

The fundamental task hasn’t changed: Ukraine needs to rebuild trust between citizens and government, hold credible presidential and parliamentary elections and move forward with necessary reforms on power-sharing, and a host of tough issues. As Henry Kissinger has proposed, multilateral and technical negotiations about meaningful constitutional reform and the devolution of power in Ukraine remain essential. Unfortunately, that process has barely started. By the time it begins moving in earnest, it may be a simple case of too little, too late.

Ukraine and the West are free to chastise Russia and blame Moscow for the tragedy that has befallen Ukraine. Yet until there is a concerted Ukrainian effort to reform key central institutions and a more concerted Western effort to seriously aid Ukraine, the vision of federalization proposed by Moscow may become the only political reality.

Balazs Jarabik is a visiting scholar at the Carnegie Endowment for International Peace.