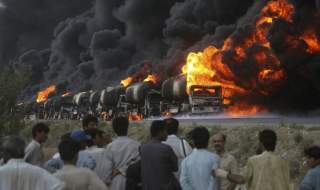 Last week brought a new low for the U.S.-Pakistan relationship that began with a stormy tweet message from the U.S. president, citing Pakistan’s deceitfulness in fighting terrorism. Following the tweet, the United States unveiled a string of measures that made a clear distinction about how the Trump administration no longer views Pakistan as an imperfect friend, but as a clever enemy. The new measures included a suspension of U.S. security assistance to Pakistan, comprising $255 million in Foreign Military Financing and as much as $900 million in the Coalition Support Fund (CSF). On top of that, the State Department placed Pakistan on a severe watch list for religious freedom violations, all while Sen. Rand Paul vowed to introduce a bill in the U.S. Senate to cut all aid to Pakistan. In response, Pakistan’s foreign minister furiously declared that there was no alliance between the two countries and that the United States has been a “friend who always betrays.”

Historically, the United States has provided Pakistan three types of assistance—military, economic and the CSF funds. In general, the military aid and CSF funds, which began in 2002, constitute the bulk of U.S. assistance to Pakistan. The CSF, however, seen by Pakistan as reimbursement for operations conducted by its troops inside Pakistan, is a misnomer that effectively serve as a slush fund that Islamabad spends on farming terrorism.

Make no mistake, Trump is neither wrong about Pakistan nor is he the first U.S. president to criticize Pakistan for its deceit and cut American assistance. The U.S. military assistance to Pakistan first started in 1954 under President Dwight Eisenhower and lasted for almost eleven years, in which the United States provided over $800 million to Pakistan, averaging nearly $75 million every year. However, in 1965, following an arms embargo imposed on Pakistan, President Lyndon Johnson ended U.S. military aid to Pakistan after the outbreak of the first India-Pakistan war. For the next sixteen years, until 1982, Pakistan received little to no support from the United States. Between 1977–1979, the Carter administration even cut off all economic assistance to Pakistan after Pakistan began its secret uranium enrichment program. At the time, Pakistan’s prime minister Zulfikar Ali Bhutto famously stated that Pakistan would build a nuclear bomb even if its people had to “eat grass.”

However, United States resumed its support in 1982 under the Reagan administration after the Soviets invaded Afghanistan. For the next nine years, Pakistan received over $2.5 billion in U.S. military assistance, averaging nearly $270 million a year. But, in 1990, the United States again stopped its support because of Pakistan’s pursuit of nuclear weapons. Until 2001, America’s carrot-and-stick approach alternated between providing Islamabad negligible assistance and imposing strict sanctions on its nuclear program. However, that changed in 2001 after the United States entered Afghanistan and renewed its support to Pakistan in 2002. Since then, Pakistan has received over $33 billion in U.S. military and civilian aid, including nearly $21 billion (an estimated $4.1 billion in Foreign Military Financing and nearly $15 billion in CSF funds) in military support.

Nonetheless, America’s generous support over the last six decades has neither helped cultivate an ally in Pakistan neither has it meaningfully changed its behavior. In fact, it has made Pakistan more resolute in pursuing its goals. Although Pakistan has weathered previous U.S. aid cuts, each past episode in the bilateral relationship has driven the partnership more towards an irreparable trust deficit. The first event that created a Pakistani distrust of the United States was in 1962 during the Indo-Sino border conflict when the Kennedy administration decided to provide India with military assistance. Ayub Khan, Pakistan’s president at the time, felt that the United States had stabbed Pakistan in the back without discussing it first with Pakistani leaders. Since then, the relationship has transformed to a one best described as “transactional.”

This decades-old trust deficit has made it more difficult for the United States to establish a quid-pro-quo relationship with Pakistan with regards to its assistance. If anything, Pakistan has steadily become more insincere and inconsistent in delivering on its many promises, including, for example, not abandoning its poisonous support to various terrorist groups. The only thing that Pakistan has done with remarkable consistency is: denial. Today, the underlying challenge in the U.S.-Pakistan relationship is the divergence of interests. In truth, a cursory look at the past shows that Pakistan has never really trusted the United States. Pakistan’s narrative, however self-destructive, has been clear: support Pakistan’s core national interests. As such, Pakistan’s military and civilian establishment have not wavered to do so even when it came at the expense of its relationship with the United States.

The urgent questions now are: what comes next and what does it portend for the future of this tempestuous partnership?

As the events evolve, the United States is likely to take additional punitive actions against Islamabad, including stripping Pakistan of its unearned non-NATO ally status that gives the country preferential access to military technology and sales. It is also likely that the United States will place sanctions on specific Pakistani army and intelligence personnel with ties to terror groups, targeting Pakistani banks and financial entities used as laundering schemes, and escalating drone strikes in Pakistan’s tribal areas. Although a full breakdown in the U.S.-Pakistan relations is unlikely at the moment, it could well head for a complete divorce should the United States also sanction Pakistan’s notorious intelligence agency, the ISI. In that case, the Treasury Department would begin to handle the ISI the same way it now deals with Iran’s Islamic Revolutionary Guard Corps.

However, the immediate concern is whether U.S. measures could prompt Pakistan to retaliate by shutting down U.S. access to Pakistan’s land routes, ports and airspace. Since 2001, the United States has become cripplingly dependent on using Pakistan’s air-and-ground routes to transport lethal and nonlethal supplies to support its Afghan war efforts. Pakistan has been paid between $1,500 to $1,800 for each cargo truck that travels from Pakistani port in Karachi to Afghanistan. Meanwhile, in return for using Pakistani airspace for U.S. military flights, the United States has compensated Pakistan fabulously, both in CSF funds and in direct military assistance. Depending on how far the Trump is willing to push Pakistan, another retaliatory measure Pakistan could take is to refuse, or limit, visa services to the U.S. diplomats, intelligence and civilian persons, or selectively expel American intelligence personnel from Pakistan. At the same time, Pakistan could also potentially provide more freedom of action to the various terrorist groups it farms.

However, in the absence of a cheaper, shorter and acceptable alternative routes, U.S. dependence on Pakistani supply lines has provided Islamabad an important leverage. Past instances show Pakistan has exploited its leverage by blocking its transport routes on several occasions. The more expensive alternative to Pakistani routes is the Northern Distribution Network, a patchwork of overland, rail-and-sea routes established in 2008, which crosses through the Central Asian republics and Russia and links Afghanistan with the Baltic and Caspian ports. However, while the United States has previously used this one-way transit route, the U.S.-Russia tensions has made American access to this route somewhat complicated.

Nevertheless, without a viable alternative, the United States will have no choice but to capitulate to Pakistan. Between the Pakistani and the Central Asian supply lines, two other routes could serve as possible alternatives.

The first is the strategic Iranian Chabahar port, a regional transit and transport corridor between Iran, India and Afghanistan. The port, which circumvents Pakistan, has opened direct trade routes between India and Afghanistan. India, which operates two berths in the seaport, has also funded the road and railway lines that links the port to Afghanistan. Last October, India sent its first wheat shipment through the port to Afghanistan, which could provide the United States an alternative to Pakistani supply lines. However, given the U.S.-Iran discord, the United States could potentially use the services of Indian companies as contractors to resupply nonlethal cargo, including construction material, heavy equipment, and food through the Chabahar seaport into Afghanistan. Compared to the Northern Distribution Network, using Chabahar could not only prove cheaper and reduce delivery time, but it would also open a two-way cargo flow out of Afghanistan. Additionally, the Zaranj-Delaram highway, or Route 606, an India-built road that connects Afghanistan’s southern Nimroz province to the Iranian border, would facilitate direct cargo deliveries to Kabul and elsewhere in Afghanistan. The port could also further solidify the U.S.-India ties after Trump openly called on New Delhi to take a larger role in Afghanistan’s development.

The second alternative is for the United States to adopt a spider web of supply lines approach. This would entail using U.S. freight contractors to supply nonlethal cargoes such as fuel, food, construction material and equipment through commercial shipments via land routes in Central Asia, mainly Uzbekistan, with whom the Afghan government has recently established closer relations. At the same time, the United States can use the services of military contractors to transport lethal goods and personnel by air through various U.S. military installations in the Persian Gulf, including the Al Udeid Air Base and the As Sayliyah Army Base in Qatar, Camp Arifjan in Kuwait, and the naval base in Bahrain.