The Path to War: How the First World War Created Modern America 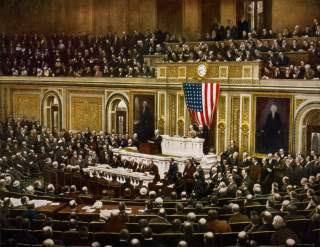 In February 1915 the German government had announced its intention to sink ships headed into active war zones. On March 28, one American died when a German ship sank the liner Falaba off the coast of Sierra Leone. On May 1, a U-boat had struck the American oil tanker Gulflight off the coast of Cornwall, killing three more Americans. The German government apologized and blamed the latter incident on a case of mistaken identification. Wilson pledged to hold the Germans to “strict accountability,” but the incidents soon faded from public view.

Just a few days later, however, the issue of submarine warfare catapulted back onto center stage when a U-boat sank the Lusitania, the world’s foremost luxury liner, a ship that had transported statesmen, journalists, businessmen, and tourists between the United States and Europe in war and peace alike since its celebrated launch in 1906. Edward House had sailed on it earlier in the war, as had war correspondents Frederick Palmer and Irvin Cobb when they left for Europe to cover the German invasion of Belgium. The Lusitania was therefore more than just any ship. It represented to many people, on both sides of the Atlantic, a pinnacle of Western civilization; the Cunard Liner company advertised its magnificent ship as “a perfect epitome of all that man knows or has discovered or invented up to this moment in time.”

American and British leaders saw the sinking of the unarmed and vulnerable Lusitania as a symbol of the threat that Germany posed to the vital links between them and to civilization itself. Page had not mentioned any specific ship by name in the letter to his son, but just days before the sinking King George V had specifically asked House, “Suppose they should sink the Lusitania with American passengers aboard?”

Germany had announced its intention to sink passenger liners; German officials had even taken out advertisements in New York newspapers, warning Americans that they traveled into the North Atlantic war zone at their own risk. Several people with bookings on the ship’s ill-fated voyage, including playwright Justus Miles Forman, had received mysterious phone calls in the days before the ship’s departure from men with German accents urging them not to travel on the ship. They had all ignored the warnings, presuming them to be a hoax or some kind of sick joke. No one in the United States seemed to believe that the Germans would actually target a famous and luxurious ocean liner carrying innocent civilians. The Lusitania, a massive ship with four distinctive funnels, was not the Falaba or the Gulflight; in this case, there could be no claim of mistaken identification. Most believed that the famous ship was safe from harm; in any case it was supposed to be fast enough to outrun submarines.

Nonetheless, a German U-boat did sink the ship off the coast of Ireland on May 7, 1915. Almost 1,200 people died in the frigid waters of the North Atlantic, including 128 Americans. The tales of horror told by the 764 survivors, as well as the photographs of their hollowed, traumatized faces, first shocked and then outraged Americans. Although there were no anti-German riots in the United States—as there were in Canada—anti-German sentiment ran hot. Newspapers brought out what they called their “Second Coming Type” for once-in-a-generation size headlines. The German embassy’s statement that the ship had been carrying war contraband failed to convince contemporaries of the justice of sinking it and the German government’s celebration of the event, including the casting of commemorative medals, only added to American fury. Life responded with a cover image showing a submarine’s periscope (sliding menacingly westward) across an ocean with a caption reading “The Assassin.”

The Lusitania sinking proved that the European war had finally become America’s. American lives had now been lost, including those of innocent women and children. Fifty children under one year of age had died on the Lusitania, and several newspapers reprinted a photograph of a Philadelphia couple and their six children with the caption “all lost with the Lusitania.” The ensuing diplomatic crisis created a need to come together and face an unprecedented international crisis with one voice. Virtually all Americans felt an impulse to demonstrate that, whatever their views on the war, they now stood shoulder to shoulder with their countrymen in a time of need. From Richmond, Virginia, came a pledge from the Jewish community to prove that “Good, red American blood had not disappeared from the face of the earth.” Patriotism, they noted, “asserted itself,” both inside the Jewish community and out. One newspaper pledged that American Jews “will take their stand with the body of patriotic Americans who are intent on preserving the honor of the Republic and on safeguarding the welfare of its people.” The American Hebrew and Jewish Messenger urged calm but noted that the nation faced a moment of truth as grave as anything since the sectional crisis that had produced the Civil War. The sinking was, in the eyes of the editors, “a demonstration of the terrors that war can bring to noncombatants innocent of any thought of human destruction.” If America had believed itself immune from the nightmare of that terror, the sinking of the Lusitania definitively proved otherwise.

The leaders of the Hispanic community in New Mexico responded to the sinking by declaring their allegiance to the United States. In the 1898 war against Spain, New Mexican identities came under intense scrutiny; in 1915 there would be no such cause for concern, and in the months after the sinking Hispanic-Americans came to constitute half of the New Mexico National Guard. Nuevomexicanos saw a moral imperative to join the outrage at German behavior, as well as a benefit to their own community, which had only just attained the full rights of citizenship when New Mexico became a state in 1912.

For Italian-Americans, the sinking of the Lusitania coincided with Italy’s entry into the war on the Allied side. While the German-American press railed at the Italian government’s perfidy (Italy had had an alliance with Germany in 1914, but did not join the war on the German side), the Italian-American community mobilized itself to help its country of birth. By 1917 more than ninety thousand Italian men living in the United States but not yet naturalized returned to Italy to serve in its armed forces. Immigrant aid societies in New York, Philadelphia, Boston, and elsewhere stopped using their resources to help new immigrants settle in the United States; instead they helped Italian reservists return home to fight. The events of spring 1915 tied those who stayed more closely both to the Allied cause and the general shift of anti-German sentiment. Many Italian-Americans had family actively fighting in Europe and therefore the closest connections to the war of any recent immigrant group. They tended to follow news closely and, with the exception of some socialists, increasingly saw the goals of Italy and the United States as overlapping. Some joined the American armed forces in anticipation of the day that the United States would enter the fight alongside Italy. In New Haven, one group responded by creating an all-Italian machine gun company in the Connecticut National Guard.

The Lusitania sinking had the further effect of suggesting that perceptions of the Two Germanys might be inaccurate. Rather than respond with anger and fury at their government’s “horrible” and “shameful” massacre on the high seas, the German people seemed elated. The American Israelite was speaking for more than its Jewish readership when it concluded that it could no longer draw such a fine distinction between the German government and the German people. “Many Americans have been startled by the change that seems to have been brought about in the German nation. A kindly people whom we habitually liked and respected seem to have been somehow transformed by wrath and fear.” An editorial in the mainstream Saturday Evening Post agreed, noting that “the war has turned the German people into barbarians—the Lusitania [is] evidence.”

Similarly, the Nashville-based South Atlantic Quarterly argued that the German reaction to the sinking of the Lusitania showed “the perfect accord between the German people and their government.” Both had proven beyond a shadow of a doubt that they “were in no mood to urge the maintenance of friendship with the United States.” Sadly, the American people had to conclude that “the Germans were not so innately pacific as we had wished to consider them.” At the start of the war the journal had subscribed to the Two Germanys thesis and attributed Germany’s crimes, not to the nature of the German people, but to the “Prussianization” of German state and society. After the Lusitania incident, the magazine called its former views “absurd.” Writer Arthur Gleason, a man with clear nativist sympathies, wrote that the good German spirit had been “misdirected by the handful of imperialistic militarists in control. There has been no instance of a noble force so diverted since the days of the Inquisition.” The United States could no longer satisfy itself with hoping that the German people would demand changes from their own government. There could be no peace in Europe as long as the Germans, with their barbaric customs, “invade that soil, burn those homes, and impose their alien ideas.” Rabbi Samuel Price shared those sentiments, noting in his diary that people in his community in Springfield, Massachusetts, were “enraged against Germany.” The notion of the German people as innocent in war crimes faded, although the idea of them as victims of their government did not.