The Pentagon Needs to Take Advantage of Budget Stability 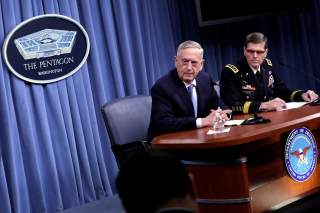 “You fix your roof while it is sunny out. Right now it appears to be sunny for the next couple of years.” That is how Mark Esper, the Secretary of the Army, described the current state of the Army and of our national defense in a recent lecture at the Heritage Foundation.

Why the sunny forecast?

Well, the current leaders—both in Congress and in the Pentagon—are sincerely interested in furthering reform in the Department of Defense. Also, the recent budget agreement offers the financial stability to push reform forward.

Since Republicans Rep. Mac Thornberry and Sen. John McCain have wielded the gavels in their respective armed services committees, they have placed renewed emphasis on improving how the Pentagon operates. In recent years, Congress has been able to reform military retirement, changed the acquisition leadership structure, and continuously assess military health care.

Both committees appear willing to continue improving the department, as evidenced by the reform proposals just released by Thornberry. These are likely to find a receptive audience at the Pentagon.

Secretary of Defense James Mattis has used his public speeches and the National Defense Strategy to reiterate that one of his three lines of effort is to “reform the Department for greater performance and affordability.” This reflects a general dissatisfaction, expressed multiple times, about the layers of bureaucracy and inefficiencies that date back to the 1990s.

Patrick Shanahan, the deputy secretary of defense, has been tasked with most of the responsibility for transforming how the Pentagon does business. He has formed various reform management groups, each focusing on a different aspect of the Pentagon’s back office. So far, little information has emerged from these groups. These coming weeks would be a great period for them to show some of their work.

As part of the FY 2019 budget request, the Department of Defense stated it will implement $6 billion in reform initiatives. Yet, despite the substantial number, the budget documents offer little discussion of the intended reforms. A new round of base closures and realignments could be expected to save $2 billion. The promise to reduce Pentagon operating costs by $6 billion would therefore be the equivalent of three rounds of base closures—no small task.

What will help make that possible is the fact that Congress has been able to create some stability for the defense budget.

Despite all the flaws of associated with the Bipartisan Budget Act of 2018, it raised the budget caps for defense for both 2018 and 2019. This creates short-term stability and largely removes the discussion on the topline from the debates on the coming National Defense Authorization Act. This leaves more legislative time for the armed services committees and Congress to focus on reforming Department of Defense operations.

All in all, Secretary Esper is correct in his assessment: it is the best time to fix the Pentagon’s roof. There is likely budget stability for the coming year; the department has an increased budget and willing partners in Congress.

This is a rare confluence of domestic factors. To waste this opportunity would be negligent. The time to change how the Pentagon operates its back office is now.