The Pentagon Is Worried About Hacked GPS 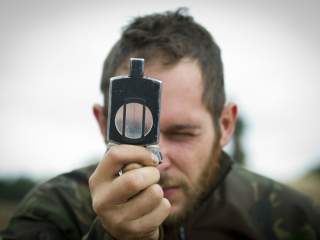 GPS is a two-edged sword. The Global Positioning System has been the foundation of a revolution in warfare that enables highly accurate smart bombs and navigation systems. With all the furor over civilian casualties caused by smart bombs, imagine what the toll would be without GPS weapons.

On the other hand, GPS is the device that allows civilian drivers to follow its directions while driving off a cliff. Which raises the question: what happens when GPS isn't available?

It's a question the U.S. military is taking very seriously. The advent of cheap GPS jammers allows terrorists as well as hostile nations to block navigation signals. Hackers can disrupt the system, while the GPS satellites themselves—even at 12,500 miles high—are potentially vulnerable to anti-satellite weapons. And that's assuming that America doesn't wreck its own GPS system; the U.S. Air Force's plan to develop the next generation of GPS ground control stations has been described by the Pentagon as a "disaster."

So it is no surprise that the U.S. military is pursuing several backup technologies for GPS. The Air Force and Navy are asking the defense industry to come up with alternatives for when GPS isn't available.

The Navy, for example, wants a Positioning, Navigation and Timing (PNT) system that allows users to navigate from radio signals when GPS is down. Ironically, one alternative the Navy is proposing is LORAN-C, the radio navigation system that the United States shut down in 2010 because GPS supposedly rendered it obsolete. "Since then, the government has realized that GPS represents a single point of failure which can be denied through unintentional and intentional interference," explains the Navy, which also notes that the technology can be used by civilian airliners when their GPS navigation has been disrupted.

The Air Force is also looking for a PNT system. Their approach is focusing on pseudo-satellites (pseudolites), ground or airborne transmitters that perform the same function as GPS satellites, but can overpower jamming because they are a lot closer to the user's location than an orbital GPS station.

Not to be outdone are the people who get themselves into situations where accurately knowing your location is more than a luxury. Special Operations Command (SOCOM), which oversees America's commandos, wants a GPS alternative for its aircraft.

SOCOM does not paint an optimistic picture of current GPS technology. "Some of the issues with the current GPS include blind spots as well as spoofing and jamming of the GPS signal," states the research proposal. "Additionally, many GPS satellites are outside of their designed lifetime and are likely to become less reliable in the future. Finally, it is uncertain whether current budget cuts will allow the funding needed to launch new GPS satellites."

No doubt the Pentagon will find alternative technologies, perhaps something that will replace GPS. But the larger question is technological dependence. If the U.S. military, not to mention civilian airliners and ships, are that helpless when GPS is down, then perhaps the problem is with the user as well as the technology.

Maybe it's time we learned how to read maps again.