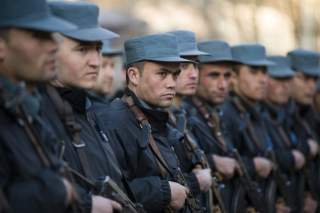 On Saturday, thousands of ethnic Hazaras rallied in Kabul to press for an electricity transmission line to be routed through their heartland (Hazarajat) in central Afghanistan. Months of tensions had led up to the protest—the second since May. The protestors were met by two suicide bombers, purportedly from the local affiliate of the so-called Islamic State (ISIS), known as the “Khurasan Province” (IS-Khurasan). At least eighty people were killed in the dual blasts.

Given Afghanistan’s unique sociohistorical context, the attack claimed by IS-Khurasan elevates the danger not of sectarian conflict, but of ethnic conflict and the collapse of the power sharing agreement in Kabul.

IS-Khurasan stated that it attacked the Hazaras because of their involvement in the war in Syria. Most, but not all Hazaras are Shia Muslims, and they constitute a vast majority of the Shias from Afghanistan and Pakistan recruited by Iran to fight on behalf of the al-Asad regime in Syria. Their involvement in Syria is billed as part of the defense of the holy sites revered in particular by Shia Muslims. In reality, however, what began with a few hundred Shias from Afghanistan and Pakistan defending holy sites has mushroomed into a division-size force fighting as part of the Liwa Fatemiyoun. Hundreds of these Shia fighters have been given sniper training by Hezbollah. Recruited by the Islamic Revolutionary Guards Corps (IRGC), the Hazara Shias have been used by Iran to make up for heavy losses on the battlefield. While IS poses a compelling threat to holy sites revered especially by Shias, the involvement of Hazara Shias in Syria’s sectarian war puts their own community back home in greater danger.

An IS-Khurasan commander told Reuters, “Unless they [the Hazara Shias] stop going to Syria and stop being slaves of Iran, we will definitely continue such attacks.”

Today, Iran uses Hazara Shias as cannon fodder to fight its war in Syria. Poor Afghan Hazaras residing in Iran are offered Iranian citizenship to fight in Syria. While some Afghans are offered carrots, others are offered sticks. There are indications others—including poor, illegal workers in Iran—are compelled to go fight in Syria. Iran also recruits Shias within Afghanistan, promising them “an Iranian passport, a house and money” should they fight in what they describe as a “religious war.”

To be clear, IS-Khurasan would have targeted the Hazara Shias, even if members of their community had no involvement in the Syrian war. Like its parent organization, IS-Khurasan has a particular animus toward the Shia, declaring them to be outside the fold of Islam and worthy of death.

A Long History of Persecution

The targeting of Hazaras is not a new development in Afghanistan or neighboring Pakistan. It goes back deeper into the modern history of the region. In the late nineteenth century, an ethnic cleansing campaign by King Abdul Rehman Khan of Afghanistan forced Hazaras—both Sunnis and Shias—to flee to the Quetta region of what is now Pakistani Balochistan, but was then part of British India.

The Hazaras remained marginalized in Afghanistan. But in Pakistan, they faced little stigma until the 1990s. For example, General Musa Khan, a Hazara Shia, was once commander-in-chief of the Pakistan Army and later served as governor of the Balochistan province. Hazaras, including Hazara women, display a readiness to leverage educational opportunities.

But, beginning in the late 1990s, Hazara Shias were viciously targeted by the Lashkar-e Jhangvi (LeJ), a Pakistani Sunni sectarian group allied with al-Qaeda and the Afghan Taliban. A brief LeJ campaign against Hazara Shias in Balochistan faded in the early 2000s, but renewed in 2007 until recently. LeJ mercilessly targeted Hazara Shia residential communities and religious pilgrims in what was nothing short of a “cleansing” campaign.

In Afghanistan, the Hazara Shias were part of an alliance opposing the Taliban as it spread in the 1990s. The Afghan Taliban massacred hundreds of Hazara civilians, singling out Shias, in its campaign to take over Mazar-i-Sharif. Attacks on civilians and massacres of the Taliban by the Hazara Hizb-i-Wahdat militia also helped fuel ethnic conflict.

But the U.S. invasion of Afghanistan in 2001 changed the fate of the Hazaras. Since then, members of the Hazara community routinely top university admissions examinations; majority-Hazara provinces have the highest passing rates for these tests. Nearly one million Hazaras live in the capital of Kabul. They are no longer on the margins. But that has also produced resentment of the rise of the “uppity,” upwardly mobile Hazara.

In Afghanistan, Hazaras have been targets of violence due to both ethnic and sectarian motivations. But Afghanistan has not had quite the same level of sectarianism as Pakistan has, and neither compare to Iraq or Syria. Saturday’s attack on the Hazaras was roundly condemned across the ethnic and religious spectrum in Afghanistan, including by the Afghan Taliban. But it is ethnicity remains the dominant dividing line in the Afghan polity.

The Hazaras are a historically marginalized, but are hypermobilized and upwardly mobile community that lies at the cross-section of the country’s complicated ethnic, political and sectarian fault lines.

Afghan President Ashraf Ghani has supported the rerouting of the electricity transmission line away from the Hazarajat. But members of his cabinet hailing from the opposite side of the ethnic–political divide have publicly come on the side of the Hazaras. Ghani is a technocrat and a visionary, but not a politician. His shaky power-sharing deal with Chief Executive Abdullah is weak, if not unraveling. The attack on the Hazaras took place as centrifugal forces grow stronger in the country.

ISIS’s prospects in Afghanistan are dim. It is being denied space by both the Afghan Taliban—a strategic rival—and an Afghan society that finds its extreme Salafi jihadism to be alien. But there is risk that ISIS, as a sectarian actor, could indirectly fuel ethnic conflict in Afghanistan. Continued attacks on the Hazaras would force the community to further mobilize as an ethnic group. The Hazaras would receive support from some non-Pashtun actors inside and outside of the current unity government. More attacks on the Hazaras might also fuel a narrative that elements of the Afghan intelligence services are enabling these ISIS attacks.

This narrative would not only be given weight by an unfortunate attitude of condescension and derision toward the Hazaras, but also by an actual record of tactical support for jihadist actors by Kabul. Last year, an Afghan parliamentarian alleged that his country’s intelligence service (NDS) is supporting the local ISIS affiliate to weaken the Afghan Taliban. For years, the NDS supported the Pakistani Taliban in its fight against Islamabad. And, currently, the NDS and the Central Intelligence Agency are supporting an Afghan Taliban splinter group that has been alleged to be linked to IS-Khurasan.

The Kabul government should be wary of Faustian bargains with jihadist actors. And it must, somehow, consolidate its ranks and ensure that a series of electoral and constitutional reforms are enacted by the impending deadline this September. Parliamentary elections are already a year late. The unity government’s legitimacy and political cohesion are waning. A weak central government incapable of keeping the country’s elites together makes Afghanistan more vulnerable to forces that are keen on polarizing the country. Worldwide, ISIS has proved to be extremely deft at sowing discord among peoples. And so while the group is a secondary insurgent force, its potential ability to make latent divisions in Afghanistan rise to the surface should not be dismissed.

Arif Rafiq (@arifcrafiq) is president of Vizier Consulting, LLC, which provides strategic guidance on Middle East and South Asian political and security issues. He is also a fellow at the Center for Global Policy and the author of a report on sectarian violence in Pakistan.