The Philippines Are Just a Symptom of America's Asia Pivot Problem 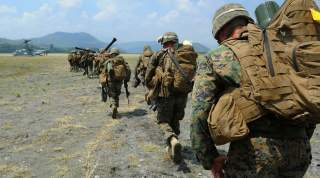 Duterte’s recent antics in Beijing—declaring a still-vague “separation” from, and diatribes against, the United States, and in return coming home with an announced $13.5 billion goody bag of pledged loans and investments—form the most extreme segment of a downbeat narrative complicating Southeast Asian politics.

This trend is evident across Southeast Asia. In Malaysia, a major corruption crisis is paralyzing the government; to distract the populace, the ruling party flirts with hardline Islamist changes to the penal code. In neighboring Thailand, backroom maneuvering within the military junta after the long-serving monarch’s death has created more angst and uncertainty, and U.S. prodemocracy and human-rights concerns are set to drive the junta further into China’s arms.

Unfortunately, America’s “rebalance” strategy has to garner support from within this unpromising regional environment. Duterte’s vulgarity (he recently called President Obama a “son of a whore”) may set new lows, but the tone and depth of other longstanding U.S. relationships in Asia are also at risk.

It wasn’t supposed to be this way. Beginning in the last two years of the Bush administration, the United States resumed making Asia a priority, diminished after the 9/11 attacks and by the subsequent land wars in Iraq and Afghanistan.

The Obama administration’s “rebalance” both accelerated this shift towards Asia and repackaged it with loud public diplomacy. Since then, the United States has reacted directly to China’s increasingly assertive behavior in the Western Pacific. Washington makes the case that its geography, Pacific Ocean possessions and sustained military/economic presence make America “a resident power in Asia.”

In fact, the United States has a 240-year history as an actor in the Asia-Pacific. But has this long track record in Asia instilled enough deep knowledge about the region to counter and confound Chinese assertiveness?

Here’s the crux of the present problem, one highlighted but not caused by Duterte’s provocations: The strategic necessity for counterbalancing Chinese behavior remains unchanged, but the tactical underpinnings of the strategy badly need an upgrade.

How we choose to react to Duterte’s insults will be a revealing test of our knowledge base and skill in keeping China at bay. Since 2010, the United States and other well-disposed countries, like Australia, Japan and South Korea, have moved to improve Philippine maritime capacity. (Chinese ships routinely harass Philippine fishing vessels, and Beijing occupies and then builds up by dredging atolls and reefs, claimed by Manila as Philippine territory. This has been happening since the mid-1990s, accelerating over the past ten years.)

Duterte is quite a piece of work—even for a country producing disreputable figures like former president Ferdinand Marcos and his kleptomaniacal wife, or Joseph “Erap” Estrada, a B-action movie star who, as president, installed his mistresses in different government departments as de facto decisionmakers. Then, as now, criminal networks from Fujian and other Chinese provinces teamed up with Filipino ethnic Chinese to manipulate national and local government.

Duterte hails from Davao, a town in southern Mindanao, whose moniker “the murder capital of the Philippines” emerged during the 1980s. The town provided an incubator for Duterte’s brutal methods, and for his populist appeal.

From such beginnings has come the latest, unexpected challenge to America’s China counterbalancing policy. In recent weeks:

• Duterte has abused the hospitality of his ASEAN conference hosts by making personal attacks on critics, from the U.S. president on down.

• He has issued conflicting statements about the future of U.S.-Philippine military exercises and the supply of U.S. defense equipment, threatening in Tokyo this week to rescind the defense agreement allowing the U.S. access to five Philippine bases.

• He has brought home a great deal of pledged economic largesse from China, including $9 billion in soft loans and a $3 billion credit line from the Bank of China, plus promised Chinese investments of $15 billion. Chinese and Philippine firms have inked “preliminary agreements” for railways, ports, energy and mining projects totaling $11.2 billion. He hopes to maximize loans from the Chinese-led AIIB.

In each of the Philippines’ neighbors, a similar scale of promised Chinese aid and investment has been announced. But in many cases (e.g., unrealized Russian oil and gas deals) such as Indonesia, only a small fraction of the promised goodies has arrived. Nonetheless, Duterte represents an extremity of behavior, not of choice. China’s economic largesse dwarfing that of the United States in Southeast Asia is tilting things in its direction. But Duterte’s defiant charge in Beijing that “America has lost” is an exaggeration he may come to regret.

Yet, all told, domestic political trends in Manila, Kuala Lumpur, Bangkok and elsewhere suggest that U.S. policy in Southeast Asia is much in need of a makeover.

Strategically the rebalance matters just as much, if not more so. Tactically, however, the fissures are showing, partly because the old Southeast Asian order based on the faux unity of ASEAN is showing its age, and partly due to self-inflicted wounds.

The clarity of the “pivot” dimmed as the administration, fearful of losing China’s cooperation on global issues like the Paris Climate accords, complicated moves to behave proactively in the South China Sea. The administration spent five-and-a-half enervating months devising a necessary, but insufficient and reactive, freedom-of-navigation operation (FONOP) in areas of the South China Sea where China has built up area-denial capacity.

Obama has demonstrated that freedom of navigation is a core U.S. interest. But when Asians ask, “Has the United States prevented China from doing what it wants in the South China Sea?” the answer is: no. Countries along China’s periphery have diminishing confidence in the clarity of purpose behind the rebalance strategy. This is the wider context behind Duterte’s venal moves towards China, even if, as seasoned members of Manila’s establishment assure us, “it’s mostly just for show.”

Eccentric as he may be, there was a nationalist logic to Duterte’s actions. Obama had refused a security guarantee to the Philippines. Duterte wanted the same approach adopted in regard to Scarborough Shoal in the Spratlys as the United States had done in regard to Japan’s Senkaku islands dispute with China. In Tokyo, Obama pledged that Article Five of the U.S.-Japan Security Alliance applies to the Senkakus. That refusal, plus harsh U.S. criticism of Duterte’s murderous antidrug policies, helps explain his ire toward Washington.

Duterte’s gambit coincides with other potential game-changing trends, most dramatically the demise of the Trans-Pacific Partnership (TPP), which President Obama touted as the foundation of the Asia rebalance. Failure to approve TPP, which appears increasingly likely, would be a major blow to U.S. credibility in Asia. And let’s not forgot the glaring contradiction of lecturing China about a “rules-based” order, while we have failed to ratify the Law of the Sea Convention. Factor in North Korea’s intensifying nuclear and missile threats, and the trend looks decidedly negative.

And here’s the great irony: Hillary Clinton, the driver and advocate for the rebalance strategy in 2010, may take office with a pressing need to rebalance—not China, that remains the strategic requirement—but to rebalance U.S. Asia policy itself.

Duterte’s playing the “China card,” in the end may amount to less than it appears. Duterte’s anti-Americanism is certainly out of tune with public opinion; in a recent Pew poll, 92 percent of Filipino respondents had a favorable view of the United States. A visit to Manila last week by Assistant Secretary of State Daniel Russel did not appear to clarify what “separation” means or the fate of U.S. access to Philippine bases. Still more confusing, after “separating” from the United States, Duterte’s visit to Tokyo this week deepened maritime cooperation with the key U.S. ally in Asia.

To borrow a term from Lenin, for Beijing, Duterte amounts to a useful idiot. Already the Chinese foreign ministry is arguing against too fervent an embrace. However, look no further than the PLA Navy steaming into Vietnam’s Cam Ranh Bay last week to see, even dismissing Duterte’s extreme version, the limits of U.S. reliance on ASEAN states for a strategy to counterbalance China. To be sure, the United States, Japan and Australia have stepped up maritime cooperation with ASEAN’s maritime nations. This includes a $518 million multiyear Maritime Security Initiative. Yet while building loose security networks to complement alliances may seem a sensible approach, Duterte’s abrupt switch shows that it may be built on a house of sand.

For Asia, the single worst fear lies in having to choose between the United States and China. The region prefers a “Goldilocks” U.S. Policy (not too hard, but not a G-2 U.S.-China condominium either). The Duterte episode has highlighted the fragility and inadequacy of current U.S. Asia policy aimed, rightly, at constraining unacceptable Chinese behavior. The challenge facing the next president will need as a matter of urgency to reduce U.S. vulnerabilities while preserving the strategic counterbalancing goal. No an easy task.