The Philippines' Own War on Terror 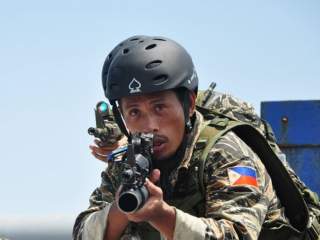 This year will mark a decade and a half of hearing the phrase “war on terror” as a normal part of the United States’ national parlance. In that same span of time, the term “undisputed victory” has become as rare as the preceding is ubiquitous—perhaps only the death of bin Laden afforded Americans the same outpouring of raw jubilation, reminiscent of V-E or V-J Day. But before and since, clear-cut successes have been practically indiscernible. Afghanistan is a morass, and northern Iraq resembles something out of Abu Musab al-Zarqawi’s most feverish dreams. ISIS has managed to franchise its brand with more adroitness than Starbucks, while the American ethos of “homeland security”—another platitude for the ages—remains as finely honed as ever.

In retrospect, the history of the conflict in Mindanao has been centuries in the making. Although Islam predates Christianity in the Philippines by about two hundred years, Catholicism spread at a rapid rate after the first Spanish settlement was established in 1565. Today, Catholics make up an estimated 80 percent of the overall Philippine population, with Muslims consigned to a demographic footnote, at 5 percent. However, like so many other nationalistic movements that become secessionist, the Moro people—a from the Spanish for Moor—had geographic compactness and a separate identity from the rest of the Philippines on their side. If they could feasibly see themselves as distinct from the rest of their fellow Filipinos, then the time was bound to come when they would test the proposition.

A succession of colonial powers—first the Spanish, then the Americans after 1898, with a brief Japanese interlude during the Second World War—put off any attempt to answer that question, as multiple ethnicities chafed under imperial rule. Moro sovereignty sat on the same distant horizon as Tagalog sovereignty. But after the United States granted the Philippines its independence in 1946, things fell apart. It became official government policy to shift the dense populations burdening the overpopulated northern islands to the more bucolic south. This meant, in effect, a sudden influx of Catholics into a region that had been decidedly homogeneous beforehand. That Catholics then proceeded to take higher-paying jobs and the best land at the expense of the indigenous Muslims was hardly a healing salve. By the early 1970s, open conflict was unavoidable.

Seldom has there been a train of administrations that have oscillated so mercurially between the application of the carrot and the stick as can be found in twentieth- and twenty-first-century Manila. Prolonged fighting led to a settlement in 1976 (using the good offices of Muammar el-Qaddafi, of all people) whereby an at-large Autonomous Region in Muslim Mindanao (ARMM) would be created within the country. This took ten years of intermittent fighting to implement, and in turn eventually broke down when Christian enclaves within the proposed ARMM balked at the proposal, leading to yet more war until a second Qaddafi-brokered convention was set in place in 1996 under President Fidel Ramos. However, Ramos’ successor, Joseph Estrada, opted to tear up the agreement and launch an all-out offensive, leading to years of repair under Gloria Macapagal Arroyo. Finally, Aquino, declaring the ARMM outmoded, started anew with a deal that would grant even more autonomous leeway in exchange for disarmament and an end to warlordism. Although agreed to in 2014, this Bagsamoro Basic Law (BBL) became more of a liability after forty-four police officers were killed by MILF fighters the next year in an unintended exchange of gunfire. Now the BBL languishes in Congress, awaiting final judgment.

Politics in the Philippines is notoriously dynastic—both Aquino and his immediate predecessor are the children of prior presidents, and the presidential candidate from Aquino’s Liberal Party is the grandson of yet another. So if, in the usual clustered regatta of candidates tacking toward their nation’s highest office, the two dreadnoughts outmaneuvering the rest of the field were of humble origins, it would be more unusual there than it would in the United States. Less than a month before Election Day, Senator Grace Poe and Mayor Rodrigo Duterte are exactly those heavy guns, with the latest poll available showing them at 36 and 28 percent, respectively. Yet despite their shared affinity for the common touch, they could not diverge more wildly in their thoughts on the implementation of Aquino’s legacy-making BBL.

Poe, who was adopted as a foundling by screen actor-turned-politician Fernando Poe Jr.—I may have overstated her no-name status—has benefited from her late father’s stardust. Campaigning on a platform of youth and vision, and her prominent role chairing a Senate committee investigating terrorism, the forty-seven-year-old has also been accused of being too wet behind the ears, and has even had to face down a Philippine version of birtherism—as an orphan, Poe cannot technically prove native-born citizenship. Although a one-time ally of Aquino’s, she has stated repeatedly that if she accedes to power, the BBL will be tossed from congressional consideration.

Bullish and uncompromising in all other respects, one would not expect Duterte prima facie to be the candidate willing to parlay with guerillas and terrorists. As mayor of Davao City, the fourth most populous city in the Philippines, for the better part of the last twenty-two years, Duterte has accrued a reputation as a fierce advocate of law and order measures. He has been rumored to suborn the use of extrajudicial death squads to enforce his draconian policies, which has won him opprobrium in the eyes of Amnesty International. Yet the experience of governing a large city in the nation’s south must have imparted a sense of what is and is not possible in politics; he unhesitatingly supports Aquino’s proposal. MILF, largely content with the BBL, even went so far as to call him, a bit too definitively, “the next president.”

Therefore, if yet another ISIS-inspired conflagration is to be avoided, it might behoove Filipinos to vote for as boorish a thug as Duterte—to bite the proverbial bullet rather than stand in the line of a real one.