This Is the Plan to Save America's Military 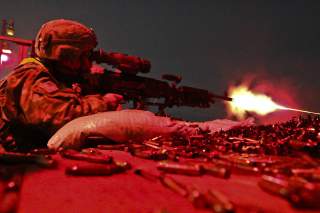 Good news for those who recognize the need to rebuild our military: the House of Representatives has passed the 2019 National Defense Authorization Act (NDAA) with broad bipartisan support, 351–66. The bill continues last year’s welcome emphasis on strengthening our armed forces.

February’s passage of the Bipartisan Budget Act of 2018 established a topline defense budget of $716 billion for FY 2019, removing much of the drama from this year’s NDAA debate. That budget increase was an essential first step on the Defense Department’s long march to improve readiness and modernize forces. The budget for 2020 and beyond is uncertain. Because of that, 2019 authorizations must set a foundation that will support the department’s rebuilding initiative in the years that follow.

In general, the House has done an admirable job, crafting policy and equipment authorizations designed to ensure sound stewardship and accountability. However, as is usual with legislation that clocks in at more than one thousand pages, the bill contains some notable “misses” as well as “hits.”

The legislation adds 16,900 service members to the Armed Forces, increasing the end strength of all services. The Navy’s active component gains 7,500 sailors; the active Army increases by 4,500, and the active Air Force by four thousand. It is an important step toward recovering the capabilities and readiness lost to the budget cuts of recent years. Importantly, the bill emphases readiness and training—the cornerstones of an effective force. For example, it funds increased flight hours for pilots throughout the services.

In accordance with law and the Employment Cost Index, the bill embraces the full 2.6 percent military pay raise due in 2019. With the U.S. unemployment rate at its lowest point in seventeen years, recruiters need every cent available to help persuade today’s youth to join the military. A full pay raise aids in that effort. Still, recruiters face a daunting task. The Army reports it will lower its 2018 recruiting goal by 3,500 soldiers, due in part to difficulties attracting sufficient numbers of applicants.

The House-passed bill also tackles the recent growth of Defense Agencies and Field Activities, aka the Fourth Estate. Typically, these agencies were created to achieve efficiencies by centralizing services that each military department was executing individually. However, their budgets grew exponentially, peaking in 2010 at more than $110 billion. The NDAA seeks to rein in the Fourth Estate spending by establishing the Pentagon’s Chief Management Officer as the singular official responsible for revising their budgets and reviewing their missions in a report to Congress every five years.

On the procurement side, the NDAA grants the Navy authority to contract for two aircraft carriers at once instead of just one. This will save the American taxpayer more than $1 billion, while speeding construction. It also will deliver more F-35 fighter jets to the services, enabling them to replace fourth generation platforms with fifth generation technology at an accelerated pace.

It also supports the administration’s National Security Strategy by emphasizing the importance of both the nuclear mission and missile defense. For example, it authorizes the National Nuclear Security Administration to engineer and develop a low-yield nuclear warhead for submarine-launched ballistic missiles, as outlined in this year’s Nuclear Posture Review. And, in an effort to increase pressure on Russia to return to compliance with the Intermediate-Range Nuclear Forces Treaty, the law also calls for additional assets to protect our European allies from Moscow’s illegal intermediate-range ballistic missiles.

In other areas, the NDAA falls short. It fails to authorize base closures and realignment (BRAC), an efficiency both the Congress and the DOD knows is needed. The Pentagon didn’t even request authority for a new round of BRAC this year, likely because it feels “beat down” by seven consecutive years of congressional rejection.

In lieu of calling for BRAC, the House-passed bill would let state governors submit closure requests to the secretary of defense. If the secretary agrees, the request would be then submitted to Congress for approval. It’s a process unlikely ever to be used. Few governors would willingly “self-BRAC.” Instead, we will have another year in which the Pentagon forgoes $2 billion worth of savings in real-estate management.

The legislation also “un-cancels” the recapitalization of the Joint Surveillance Target Attack Radar System (JSTARS) aircraft. The new National Defense Strategy had no use for this large platform, which the Air Force deemed unsurvivable in any major-power conflict. Money spent recapitalizing the JSTARS wastes money that could be applied to much more pressing needs.

Similarly, in the shipbuilding account, the House added two Littoral Combat Ships (LCS)—one more than the Navy asked for, and one more than is needed to maintain the shipbuilding industrial base in preparation for the FY2020 future frigate contract award. The LCS has disturbingly limited capabilities against a near-peer adversary. The funds spent producing an extra LCS would be better spent elsewhere—either to develop a new combat-relevant frigate or to ease the shortfall in submarine capacity.

The House-passed NDAA also requires the Navy to separate the career paths for surface-warfare officers into operations/combat systems and engineering-systems officers. Currently, surface officers serve in both areas—a cross-training that builds critically needed competencies. Under this proposal, only the ship-operations/combat-systems career path would lead to command-at-sea It’s an attempt to address the ship-handling and readiness deficiencies tragically revealed by a series of 2017 naval accidents in the Pacific, but the separation will not correct the root causes.

Rather than create a new career path, the Navy should instead be required follow the recommendations in the Navy’s Comprehensive Review of Surface Fleet Incidents. That report called on the Navy to improve its initial- and career-pipeline training and its proficiency assessments conducted as candidates progress toward commanding officer. It also said the Navy should provide officers with additional at-sea ship handling experience.

Reflecting the “hypersonic fervor” currently sweeping through Washington, the bill directs the Pentagon to submit to the Congress a validated requirement for multiple forms of hypersonic weapons by November 30. Bad move. Requiring the automatic validation of a military capability directly intrudes on the ability of the Joint Chiefs of Staff to provide their best independent military advice. While much has been made of the potential advantage of hypersonic weapons, it is premature to validate its capabilities or accurately estimate potential program costs and schedule while these technologies are still early in the experimentation phase.

Following the current plans, the Navy will not reach its twelve aircraft carrier requirement until the 2060s. To tide the service over, the NDAA directs the Navy to provide options for extending the service life of the USS Nimitz, currently slated to retire in 2023. But extending the service life of the Nimitz will not be as simple as extending the lives of Los Angeles-class submarines and Arleigh Burke-class destroyers. The Navy has never operated a nuclear aircraft carrier beyond its planned fifty-year life cycle, and its reactor would require an unplanned refueling overhaul. That alone would cost at least $2.8 billion and place even greater stress on the single shipyard capable of both carrier new construction and overhauls. Congress should instead work with the Navy to provide the necessary authorizations and appropriations to accelerate construction of the Ford-class carriers.

On balance, the House version of the 2019 NDAA marks a good step forward in the drive to rebuild the U.S. military. The House Armed Services Committee and House leaders should be commended. With a few modifications, the House-passed bill can accomplish even more, advancing America’s military capabilities and improving U.S. security posture at a time when challenges are growing in number and severity.