The Plight of the Iraqi Kurds Poses a Difficult U.S. Foreign Policy Challenge 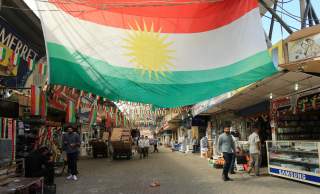 Following the Iraqi army’s move into the Kurdish-held city of Kirkuk in northern Iraq this week, some have argued forcefully that the United States should intervene to protect the Kurds and even aid in their aspirations for an independent state. A Wall Street Journal editorial warns that abandoning the Kurds “would damage America’s credibility,” and undermine President Trump’s “ability to enlist allies against Iran’s expansion across the Middle East.”

We fully appreciate the injustices, abuse and denial of basic political rights the Kurds have endured for more than a century. The Kurds have also been reliable allies to U.S. troops in the region in many ways. In the abstract, the Kurds deserve independence and self-determination, and we hope they achieve something that satisfies them in the end.

But U.S. foreign policy can’t be constructed in the abstract. It must take account of the world as it is, and acknowledge the critical role that power still plays in global politics. In that context, the question of whether the United States should, as a matter of policy, support Kurdish independence is devilishly complicated.

First, there is the strategic question of what kind of impact Kurdish independence would have. It would of course infuriate the Turks, who have long fought against Kurdish secession. A handful of Kurds responded to Ankara’s intransigence with violence, waging a protracted terrorism campaign that has claimed more than forty thousand lives in thirty years, according to conservative estimates. U.S.-Turkish relations have been strained for years, and appear to be worsening. Turkish President Recep Tayyip Erdoğan has systematically stifled civil liberties in his country, and has defied U.S. policy in Syria and Iraq. Still, Turkey is a NATO member, and hosts U.S. troops at major facilities such as the Incirlik Air Base. Defying Erdoğan by supporting Kurdish independence may gain us a new and fragile ally, but only at the expense of losing a mature and relatively powerful one.

Then there is Iraq. If the country fractures in two, or more, that could further enhance Iranian influence in Baghdad and the rest of Shiite-dominated Iraq—something U.S. policy has consistently resisted. It would also ruin any hope for an overall reduction in violence in Iraq. The prospective breakup of states from secessionist movements tends to be destabilizing; governments generally don't like to forfeit territory.

Peaceful separations—think Czechoslovakia separating into the Czech and Slovak republics, for example—are the exceptions, not the norm. When a group or region attempts to secede from the mother country, years of fighting and insurgency are the likely consequence. Indeed, the majority of conflicts since the end of World War II have involved states fighting their own aspiring statelets, not resistance to foreign aggression.

What does this mean for U.S. foreign policy and the role we ought to play in the world? Adopting an explicit policy of support for Kurdish independence would seem to obligate Americans—for the sake of moral consistency—to carry the banner for other secessionist movements, from Taiwan and Tibet in China to the Armenians in Azerbaijan, from the Raizal people in Colombia to the Bengali Hindus in Bangladesh, and, of course, the Catalans in Spain. Where to draw the line? There are over five hundred distinct languages and perhaps as many as five thousand distinct ethnic groups in the world. Affording the right to self-determination for all such peoples, and committing the United States to defend their rights if challenged, would be an impossible and ruinously costly task.

The nineteenth-century British philosopher John Stuart Mill anticipated this problem. Though he believed in the principle of self-determination, he advised against foreign intervention on behalf of peoples attempting to throw off the yoke of an oppressive or unrepresentative government. Though motivated by the noblest of impulses, such intervention would likely fail—proving costly to the intervener, and delivering only temporary liberty for the prospective beneficiaries of such intervention.

In short, open support for Kurdish independence would, at a minimum, greatly complicate U.S. foreign policy, and might set us on the path to even more military intervention and post-conflict nation-building. All this in the service of high-minded objectives that are, nevertheless, peripheral to our own national security.

That doesn't mean the United States shouldn't use its influence to prevent the ruthless crushing of the Kurdish people, by Baghdad, Ankara or anyone else. The Trump administration should use the leverage it has with those capitals to encourage them to approach the Kurdish question cautiously, non-violently and through negotiation. And when the Turkish and Iraqi governments stray from that path, verbal criticism is in order.

Beyond that, however, there is a serious risk that we'll get ourselves—and the Kurds—into more trouble.