The Plot to Undermine Trump 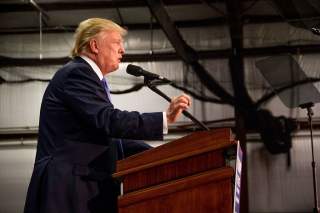 Barack Obama was not a very successful president. His defenders, however, are quick to insist that he can’t be blamed for his failures: he faced Republican obstructionism from day one. His opponents didn’t play fair; they denied his legitimacy. At the grassroots, they even claimed he was secretly a Kenyan or Indonesian, or at any rate, a Muslim.

But if efforts to delegitimize the president are in principle unfair, why, then, are Democrats now playing the same game—employing against Donald Trump the very methods they formerly deplored? Trump is “not a legitimate president,” Rep. John Lewis told “Meet the Press” earlier this month, because “the Russians participated in helping this man get elected, and they helped destroy the candidacy of Hillary Clinton.” He was only saying on camera what hundreds of left-wing activists and pundits on Twitter had already been saying elsewhere for weeks.

Trump the Manchurian Candidate, in power only because of Putin’s machinations, is the 2016 edition of Obama the Kenyan Muslim. That’s not to say that Russia doesn’t take an active interest in U.S. politics. Foreign governments have a habit of meddling in our elections: Benjamin Netanyahu all but openly campaigned for Mitt Romney in 2012. Barack Obama himself invited world leaders and opinion makers to help him with the voters back home in 2008, when he embarked on a tour of Europe and the Middle East shortly after sewing up the Democratic nomination.

The conviction that Trump owes his election (and allegiance) to Moscow, however, is out of all proportion to the evidence. As with insinuations about Obama’s loyalties, basic ideological differences are being portrayed not as things about which Americans can disagree, but as evidence of subversion and thus grounds for declaring the president illegitimate. If Obama had a more dovish attitude toward Islamist threats or an exceptional degree of sympathy for the developing world—I don’t think he did—it’s because he was a globalist liberal, not a foreign-born crypto-jihadi. And progressives should understand better than anyone why Putin might favor Trump over Hillary Clinton and why Trump might not see Putin as the satanic figure that the left does: Trump and Putin are both nationalists who despise globalist liberalism. Trump would not have to be under anyone’s influence to find Putin someone he could get along with. And Russia’s friendship has never been a winning card in American elections, as a host of liberal Democrats from the Cold War era could attest.

Progressives are outraged that Trump has himself called the results of November’s election into question by saying that illegal voters denied him victory in the popular vote. There’s a double standard here. If it’s fair game for Democrats to call Trump illegitimate on the basis of claims about foreign influence, why is it shocking if Trump claims his opponent’s numbers are illegitimate because of noncitizens voting for her? What is taking place on both sides—quite apart from the serious factual questions of foreign influence and voter fraud—is an escalation of rhetorical warfare. Up to a point, that’s to be expected from politics today. But even partisans would do well to step back.

George W. Bush faced challenges to his legitimacy, too. Progressive activists said he was “selected, not elected” in 2000. But attacks on his legitimacy proved to be wholly ineffective: they were useless after 9/11, and when Bush’s popularity declined, it was only as a result of his policies, particularly the Iraq War. Republicans had not attacked Bill Clinton’s legitimacy to quite the same degree, but they frequently noted that he only won the White House with pluralities in 1992 and 1996, and to this day the myth endures in some circles that only Ross Perot deprived George H. W. Bush of reelection. Such myths contributed to Republican overconfidence in dealing with Clinton, which led to disaster in 1998, when the effort to remove him from office through impeachment failed. Republicans lost seats in the midterms that year, with Newt Gingrich and his would-be successor as House speaker, Bob Livingston, both resigning in the fallout.

Democrats are now straining to find grounds on which to impeach Trump, should they somehow regain control of both chambers of Congress. Efforts are also underway to sue the president under the Constitution’s emoluments clause, on the reasoning that his businesses receive income from foreign customers. These measures are of a piece with the attacks on his legitimacy—if Trump is not legitimate, it follows that he should be removed on whatever grounds can devised.

But does the public really want politics to proceed this way? It didn’t in the 1990s, or in the Bush years, or under Obama. President Obama easily weathered personal attacks and attempts to impugn his legitimacy. His policies, on the other hand, cost his party control of the House and the Senate in the first midterm after he took office. Obama made a serious miscalculation: he took his success in 2008 to be a measure of support for whatever he might do in office. In fact, he was elected largely because of his predecessor’s failures. Throughout the Obama years, Democrats failed to devise new policies and new appeals that could win over voters in places like Wisconsin.

Trump innovated while the Democrats—and his GOP rivals—stagnated. He drew sharp distinctions between himself and his opponents in both parties on trade, foreign policy and immigration. He was mocked from the beginning by the political establishment and the press, precisely on the grounds that he was not a serious, legitimate candidate. Hillary Clinton, by contrast, was the epitome of credentialed, establishment legitimacy. And she lost—decisively.

No one is going to compete with Trump, or any other successful politician, by making an issue of legitimacy. Policy in the broadest sense, a persuasive pitch and program for the whole country, is what matters. This is precisely what Democrats have not tried hard enough to develop since they inherited power on the back of George W. Bush’s failures. With Hillary Clinton, they entrusted the fate of their party to the notion of legitimacy. They paid a price that they will continue to pay until they learn what led Trump to win the election, fair and square.