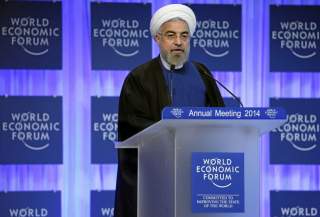 On November 24, the five permanent members of the UN Security Council and Germany (the P5+1) and Iran agreed to extend the negotiations regarding the latter’s nuclear program for another seven months. If the performances of Iran’s stock market and (informal) currency market since November 24 are any indications of public sentiment, they point to a general disappointment with the outcome of the nuclear talks. In the past few weeks Tehran’s stock market index (Tipex) has declined by more than 8 percent (and 20 percent in 2014) while the exchange rate of rial against the dollar has suffered a 10 percent decline.

Iran’s private sector was anticipating a nuclear agreement that would have gradually removed the devastating economic sanctions and put an end to current uncertainties. What they received instead was a continuation of the uncertainty surrounding the negotiations. Over the past two years, this uncertainty has sharply increased the risk of business investments in Iran for both domestic and international investors.

After suffering a sharp economic downturns in 2012 and the first half of 2013, the interim accord in November 2013 gave Iran some relief from sanctions in the form of a portion of its blocked oil revenues and allowing it to continue selling one million barrels of oil per day (bpd)– a significantly smaller amount than the average daily level of 2.3 million bpd that it exported before Western sanctions against its oil and financial sectors. This limited relief, in combination with better economic management by the new cabinet of President Hassan Rouhani and growing optimism about the negotiations, had a positive effect on economic conditions. The economic growth rate, which had been negative in 2013, rose to an annualized rate of 4.6 percent in the second quarter of 2014 (first quarter of Persian calendar). The inflation rate also declined significantly, from near 40 percent in 2013 to under 25 percent in 2014.

Despite these marginal improvements, however, Iran’s economy remains under considerable stress. Industrial activity, in particular, is operating below capacity and unemployment remains high. Under such conditions the extension of the negotiations – instead of the hoped for final agreement – will impact the industrial sector more than other sectors. In anticipation of a nuclear deal, industrialists and investors have spent recent months signing a large number of trade agreements and joint investment contracts with international partners, and must now place these deals on hold for at least another seven months. This interim period will prove extremely difficult for many industrial units, and their representatives have repeatedly warned of the high risk of bankruptcies in the industrial sector.

All of this will be exacerbated by the simultaneous decline in oil prices. The price of oil has declined by over 40 percent since June and there are no indications that this drop will end anytime soon. The combination of the oil sanctions against Iran and the steep decline in the price of oil could, within months, lead to fiscal distress and a budget deficit. This will force the Rouhani government to make some difficult choices in next year’s fiscal budget. Specifically, in order to keep the budget deficit under control it will have to choose between cutting capital expenditures and expenditures on wages and various types of subsidies.

In anticipation of the lower oil prices, the government has reduced the projected price of oil in next fiscal year’s fiscal budget bill to $70 per barrel, down from $100 per barrel in the current year’s budget. The budget bill that was submitted to Majlis (Iran’s parliament) earlier this month shows an 11 percent increase in fiscal spending which, after adjusting for inflation, is actually a reduction in real government expenditures.

This implies that the government will not be able to rely on fiscal policy to stimulate the economy. Alternatively, it is also possible that under political pressure, the government might not be able to cut the budget adequately in response to declining revenues and will be forced to increase borrowing from the central bank. However,  excessive government borrowing will lead to an increase in liquidity, which would be at odds with Rouhani’s pledge to make reducing inflation his top economic priority in the coming year.

Next year's budget bill, which Rouhani unveiled earlier this month, projects the budget for development projects to grow more than current expenditures (on goods, services and salaries of government employees). This goal, however, might also be hard to achieve. The former Mahmoud Ahmadinejad administration expanded the public sector employment significantly without regard for the long-term cost of government wages and salaries. Now the Rouhani government is faced with a bloated government bureaucracy that absorbs nearly 80 percent of current fiscal expenditures in wages and benefits. Since it is very difficult to cut these wages or layoff the excess civil servants, it is more likely that the government will have to stretch out capital expenditures over a longer period of time and put some major projects on hold.

During the agreed seven month extension of the nuclear talks, Iran will likely try to expand its economic relations with China, Russia and Turkey. China is already the second largest origin of Iran’s merchandise imports after the UAE (based on 2013 trade data). Similarly, last year China was Iran’s largest oil customer, importing an average of 420,000 bpd compared to the 199,000 bpd that India, Iran’s second largest oil consumer, purchased in 2013. Overall, then, China is already Iran’s largest trading partner.

The relationship continues to expand. Only a few days after the announcement of the extended negotiations China and Iran announced a deal that provides $370 million in Chinese financing for a petrochemical project in Iran. As a result of financial sanctions, an estimated $30 billion of Iran’s oil export revenues are trapped in Chinese banks. China has offered to finance investment projects inside Iran until the sanctions are lifted and these funds can be released.

Iran has also made some progress in economic negotiations with Russia, which is itself a target of Western sanctions. Already this year, several investment and trade deals were negotiated between Moscow and Tehran in 2014. In the next few months we are likely to witness progress in implementing these agreements. Iran will receive nuclear and other energy related technology as well as wheat, in return for oil (to be delivered by Russia to third parties as if it did not originate in Iran) and light manufacturing goods.

Iran is also aggressively trying to boost its economic relations with Turkey. The volume of bilateral trade between two neighbors is currently around $20 billion and Iran is a major supplier of natural gas to Turkey. In a visit to Turkey earlier this month, Iran’s economic minister proposed that the local currencies be used for bilateral trade instead of the dollar in order to bypass the restrictions on financial transactions with Iran. Despite its profound and enduring dispute with Iran over Syria, Turkey would benefit from an expansion of bilateral trade. Still, it is likely to move cautiously on any steps that might anger the United States. The U.S. still enjoys some leverage in Turkey and President Erdogan is unlikely to openly defy the U.S. sanctions on Iran and Russia.

Even if Iran’s efforts to expand economic ties with these countries prove successful, the overall volume of Iran’s foreign trade is likely to shrink during the seven-month extension due to lower oil revenues. While under the terms of the extension no additional sanctions will be introduced against Iran, the sharply lower price of oil will take a toll on Iran’s hard currency reserves. Not surprisingly, Iranian officials and its media are already accusing Saudi Arabia of deliberately weakening the price of oil to harm Iran and President Putin of Russia has also made similar remarks.

Nader Habibi is the Henry J. Leir Professor of the Economics of the Middle East at Brandeis University’s Crown Center for Middle East Studies.