The President Versus the Generals: Algeria's Latest Power Play 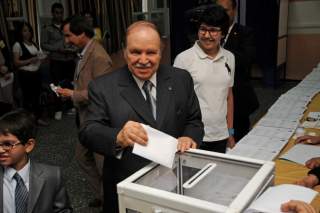 In September this year, Algerian President Abdelaziz Bouteflika announced that he had replaced the country's head of intelligence, General Mohamed “Toufik” Mediène, who had served in the role for the past twenty-five years. In the eyes of many Algerians, Mediène had obtained an almost deity-like status as an aloof and feared military official—a secretive figure, of whom only a few pictures exist. Some have also called him Algeria's J. Edgar Hoover, since he served for so long and oversaw almost all government activities. Writing in the French publication Jeune Afrique, journalist Farid Alilat noted, “He was allergic to anything that is not controllable.”

For such a large nation, Algeria doesn't often make much noise in the Anglosphere media. Unlike Morocco and Tunisia, Algeria has been timid about opening itself up to the world. It hardly felt a shudder during the Arab Spring. Some suggest that the memories of the civil war in the 1990s are still too fresh, but others put it down to the influence of le pouvoir (the power), the military and intelligence services who play a significant role in running the country's affairs. Throughout the 1990s, commonly referred to as the country's “dark decade,” Algeria's heads of counterterrorism and intelligence services ruled, in what some academics say was an “informal” manner, behind the scenes and behind the face of the civilian presidency. Their position remained firm, and since Algeria exists in a neighbourhood seething with instability, many Algerians have been hesitant to challenge the status quo.

Bouteflika, a former foreign minister, was elected head of state in 1999, with the military’s blessing—and the tacit understanding that military personnel associated with atrocities over the previous decade would avoid criminal charges. This was part of the amnesty that was launched in order to bring an end to the violence, and would later culminate as the 2005 Charter for Peace and National Reconciliation. Nevertheless, Bouteflika has never been comfortable playing the role of an obedient servant to the security elite, which has, according to Sciences Po Lyon Professor Lahouari Addi, characterized every presidency since the death of Houari Boumédiène in 1978.

With the advent of the Arab Spring in 2011 and the collapse of Colonel Qaddafi's rule in Libya, pressure on the country's security forces has grown. In many circles, there was disbelief that the DRS, the Intelligence and Security Directorate headed by Mediène, failed to prevent or thwart the attack at the gas field jointly operated by BP, Sonatrach and Statoil in In Amenas, which led to the deaths of sixty-seven, including thirty-seven foreigners, in January 2013. As a result, high-profile critics within the regime started to emerge and were not shy to point out the failings of the DRS. In February 2014, the secretary-general of the ruling FLN, Amar Saadani, called for the resignation of General Mediène and cited, among other reasons, the failure to prevent the assassination of President Mohamed Boudiaf and the kidnapping and killing of seven French Trappist monks from Tibhirine in May 1996. He noted, “if we assess the missions of internal security in some important cases, one will find this service has increased in its failures”.

That is just one high-profile example among many Bouteflika loyalists who have come to question the role of the DRS. Much of it has been orchestrated by Chief of Staff Ahmad Gaid Salah, a firm supporter of the president. In late July this year Bouteflika made the decision, without any formal announcement, to dismiss three senior security officials: Major General Abdelhamid Bendaoud, who directed the internal security service known as the DSI; Major General Ahmed Moulay Meliani, head of the Republican Guard; and General Djamel Medjdoub, head of presidential security.

The dismissal of Mediène was the final chapter. The official reason given is Mediène’s wish to retire. His replacement, General Athmane Tartag, worked closely with General Mediène for years, but after the failed attack at In Amenas, he was forced to step down. According to reports, his relationship with Mediène soured, which helped him curry favour with the civilian authorities. In 2014, he was taken on as a presidential advisor.

Bouteflika has not appeared in public since suffering a stroke in 2013. Matters of governing have fallen to Prime Minister Abdelmalek Sellal, who claims not to have presidential ambitions of his own. On the question of a likely successor, the aging Bouteflika is believed to favour his brother Said, but he is not a popular choice in the eyes of the military. Retired General Hocine Benhadid has accused Said Bouteflika of waging a campaign to break up the country institutionally in order to remain the only man in charge.

Rachid Tlemçani of the University of Algiers believes that it was President Bouteflika's insistence to run for a fourth term which pushed his problems with the DRS into the open. Therefore, the removal of Mediène is symbolic, since it reveals that despite his poor health, Bouteflika is unafraid to take dramatic steps, lest anyone think for a moment that his guard is down.

But what does it mean for ordinary Algerians? With falling oil prices, the infrastructure needed to keep the country in check is being undermined. People are unhappy, with more and more young men forced to join the ranks of the harragas (those who burn), who cross the Mediterranean in search of work. With the generation of liberators aging rapidly, the only thing that is certain is uncertainty over who will govern in the future.

Unfortunately, there are so few signs on the ground as to who will shape the country as it moves forward. Academics such as Tufts professor Hugh Roberts point to the lack of an influential opposition movement. “What you have in Algeria, are ineffectual welters of vaguely opposing groupings,” he says. “The regime can't democratise and there is no coherent reform movement”. The popular writer Kamel Daoud says Algeria will be truly free only when it has been "liberated" from its "liberators."

Emily Boulter is a writer based in the Netherlands. She is the creator of the current affairs blog “From Brussels to Beirut”. From 2010 -2013 she worked as an assistant to the Vice-chair of the Foreign Affairs Committee in the European Parliament. Her work has featured in publications and online news sources including the RUSI Journal, Real Clear World and Global Risk Insights.