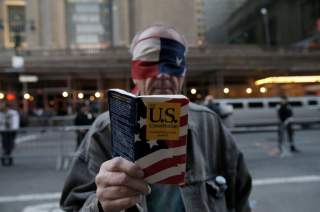 In the late evening of April 13, 2018, President Donald Trump delivered a brief statement to the nation announcing that the U.S. military—in partnership with its French and British allies—launched a cruise missile strike against the Syrian government in retaliation for its chemical weapons attack in the suburbs of Damascus. The strike was designed to send a warning to Bashar al-Assad that any additional chemical attacks on the battlefield would elicit a strong and unified military response from the western world. “We are prepared to sustain this response until the Syrian regime stops its use of prohibited chemical agents,” Trump declared that night.

While Trump’s remarks that night were indeed powerful, they included no mention of a legal justification. The president neglected to explain why the action he took in Syria was constitutional, a glaring omission given the fact that he decided upon a military response without any congressional participation whatsoever. Nearly two months later, the American people finally have a justification from Trump’s legal team in the form of a twenty-three-page opinion drafted by the Office of Legal Counsel. Unfortunately, the opinion offered is perhaps one of the most expansionist interpretations of the president’s military powers in recent memory. Taken to its extreme, the theories outlined in the memo would transition the U.S. Congress from the sole body responsible for authorizing U.S. military force overseas into a debating society that would make even the Russian Duma look like a coequal, independent branch legislature.

As one might expect, the Trump administration has based its entire legal case on the president’s Article II authority. The layman’s argument goes something like this: because the Constitution regards the president as the commander-in-chief of the U.S. Armed Forces and the Chief Executive, then the individual holding that office has the power to deploy the military into hostile situations in order to protect the U.S. national-security interest. In other words, if the president determines that a certain situation is a threat to the United States in any way, then he or she would have constitutional authority to use force to preserve, protect and defend the United States without first going to Congress for an explicit authorization.

Executive branch lawyers love this argument for understandable reasons. For one, it provides the president with an extreme amount of discretion on when, where and how long the U.S. military can be used. It is also not a novel concept to the Trump White House; the Clinton, Bush and Obama administrations have all pointed to this legal reasoning, and it shouldn’t be a mystery why. If the president can simply designate a certain issue or contingency as a threat to the national-security interest—an amorphous, generalized principle kept purposely vague—and one that requires an immediate response to safeguard American security, then there is no need to go through the politically polarizing process of approaching Congress for statutory authority. The theory is a fancy and clever way of short circuiting 535 lawmakers, any number of whom have their own ideas about what is and is not a U.S. national security priority. Why experience that kind of trouble when attorneys in the Justice Department can simply declare that the executive branch already has the power to scramble the Air Force or deploy a few thousand U.S. Army advisers?

Strip away the legal language from the OLC opinion and it becomes abundantly clear what the Trump administration—like administrations in previous years—is trying to do: render Congress irrelevant on matters of war and peace. The memo released to the public last week all but paves the way for this White House (and any White House in the future) to unilaterally plunge the United States into a war-time action without even a few hours of debate from the American people’s elected representatives. All the president needs to do is put forth a semi-convincing case that the use of force is in the national interest and falls below the status of a “sustained, full-scale conflict” that looks like D-Day circa 1944.

It’s difficult to describe just how dangerous this legal rationale is to the constitutional structure the founders painstakingly established over 230 years ago. If the president is given the authority to order the U.S. military into action unilaterally, without any formal input from Congress or the most cursory national discussion, then America’s entire system of checks and balances would be at risk of being encapsulated by a quasi-monarchical form of government. Although this may sound like an unhelpful exaggeration in some corners of the legal community, how else can one describe a reality where the decision to bomb another country or put Americans in harm’s way is on the shoulders of a single individual? If Trump’s OLC had its way, this is exactly what the reality would be.

Thankfully, the legislative branch can reclaim the war powers that it is entitled to. Congress already has the constitutional power in its hands; it just has to learn to wield it. The continued, decades-long drift into executive warmaking will only be reversed if lawmakers in both parties stop contributing to the problem by choosing the path of least resistance. Members of Congress, for instance, can no longer view debates on war as poison to their own political careers. Then and only then will the imbalance between the executive and legislative branches be remedied.

Transitioning the country from a time of peace to a time of war is supposed to be a hard decision made by a nation and its people. The founders created the the American republic that way for a reason; no war can be sustained for very long if there is not a national political consensus in favor of it. If Congress doesn’t begin standing up for the Constitution and using the awesome powers at its disposal, then the nation’s founding document could very well lose its relevance and be overridden by overbroad, specious executive branch legal opinion.

Image: A blindfolded demonstrator holds up a copy of the United States Constitution while protesting against the Republican U.S. presidential candidate Donald Trump in midtown Manhattan in New York City, April 14, 2016. REUTERS/Mike Segar