The Problem with Al Jazeera 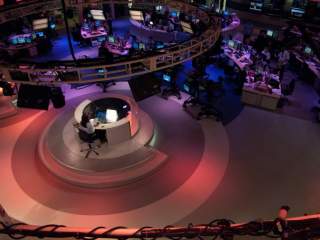 Khaled Mashal. Mohammed Deif. Ramadan Shallah. These three men are all leaders in Palestinian groups listed as Foreign Terrorist Organizations by the United States government. And all three of them were granted special airtime during the recent Gaza conflict by Qatar’s Mideast media powerhouse Al Jazeera.

By our count, Secretary of State John Kerry spoke to his Qatari counterpart at least twenty times since the start of the Gaza violence in July. Given how closely Washington has partnered with Qatar on this conflict, Americans may wish to know how Al Jazeera Arabic (AJA), Qatar’s flagship media station, covered the crisis. Furthermore, since the network’s U.S. affiliate Al Jazeera America (AJAM) celebrated its one-year anniversary this August, potential viewers deserve to know if the channel’s main affiliate has been supporting causes they would find objectionable.

It is widely known that Qatar backs Hamas and advocated for terms of a ceasefire that would benefit the terrorist organization. It is also widely known that Al Jazeera Arabic has a history of providing a platform for anti-American and anti-Semitic views.

But few Americans realize how faithfully the channel has parroted the propaganda of terrorist groups such as Hamas and Palestinian Islamic Jihad in the recent war, blurring the line between covering terrorists and serving as their mouthpiece. Indeed, the channel’s Gaza coverage seems to have taken its cues from Hamas’ own media playbook.

During the first week of Israel’s Operation Protective Edge, the Gaza-based Hamas Interior Ministry released a public relations video instructing sympathetic observers how to report on events in Gaza. Al Jazeera Arabic’s coverage of the conflict hewed closely to this missive, misleading viewers in the process.

Many of the directives in Hamas’ video called for framing Gaza reporting in terms of Palestinian “martyrs” or “victims” of “Israeli aggression”. Any Palestinian killed was to be described as “a citizen of Gaza and Palestine before speaking of his jihadi position or military rank”. The video even suggested that all Palestinian casualties be labeled “innocent citizens,” regardless of whether they were fighters or civilians.

And that is exactly what AJA did.

To take but one example, on July 24, the channel reported that the number of “victims” of “Israeli aggression” had reached 788 “martyrs,” making no distinction between civilians and known combatants. United Nations figures released that same day confirmed a virtually identical death toll but estimated that between 15 and 27 percent of these individuals were terrorist operatives. As best we can tell, AJA mislabeled known combatants as “victims” and “martyrs” on many other days as well.

The Hamas media advisory also called for a complete disavowal of any Israeli claims on the violence. When Hamas alleged Israel targeted a UN school in Beit Hanoun on July 23, an Israeli spokesperson insisted the IDF did not intentionally fire at the school. However, Al Jazeera blithely reported Israel had “targeted” the school, making no mention of the Israeli objection. Another UN school was rocked by explosions on July 30, and AJA again stated Israel had “targeted” the site without noting the IDF’s denial doing so.

While Israeli claims about the violence were regularly ignored or rejected by the channel, top officers in terrorist groups were regularly granted extensive airtime to articulate their views with little or no pushback from AJA journalists.

On July 23, AJA interrupted its prime-time programming to broadcast a forty-minute speech plus questions and answers with Khaled Mashal, who heads Hamas’ political bureau out of Doha.

Then, on July 29, the channel aired in its entirety a message from Mohammed Deif, commander of Hamas’ military wing. Immediately following his communiqué, the network broadcast a four-minute military propaganda video from his brigades.

On August 6, AJA correspondent Tamer Mishal embedded with a Hamas unit that used tunnels and mortars to strike Israeli civilian areas. Mishal did not correct the record when a fighter told him the nearby town they fired at was a settlement, even though there haven’t been settlements in or near Gaza for almost a decade.

Finally, on the war’s last day, August 26, the network again interrupted prime-time programming to air a live news conference by Ramadan Shallah, who is the secretary general of Palestinian Islamic Jihad, an Iranian-armed terrorist group even more extreme than Hamas. Shallah’s press conference was carried on the channel through to its end, for over 15 minutes, as he declared victory and explained that PIJ would strike Israel using other means even after the ceasefire.

Since late July, AJA picked up these groups’ claims that they would emerge victorious by labeling many of its news stories under the header “Gaza triumphs,” a phrase that has also become a common hashtag for Hamas activists on Twitter. After Hamas and Islamic Jihad declared victory on August 26, AJA reported that Palestinians in Gaza, the West Bank and diaspora all celebrated the “victory achieved by the resistance”.

These examples of partisanship in AJA’s coverage are more than mere semantics; they incite violence, feed the one-sided narrative of Palestinian victimhood, and bolster terrorist groups.

Doha has demonstrated the ability to control Al Jazeera’s messaging when it suited its interests before, bragging behind closed doors about how coverage changes to respond to Qatari policy shifts, and clamping down on anti-Saudi coverage when the Qatari government has sought to reconcile with Riyadh. Washington should therefore urge its diplomatic partner to put its television attack dog on a shorter leash.

To be fair, Al Jazeera America’s coverage has been less strident than that of its Arabic-language affiliate. But that’s yet another part of the Hamas media playbook. Hamas’ instructional video advised the group’s supporters to use different messages with Western and Arab audiences when discussing the war in Gaza.

At a certain point, AJAM’s executives have to wonder: how forgiving will U.S. viewers be when the Al Jazeera brand routinely twists the truth for terrorists?