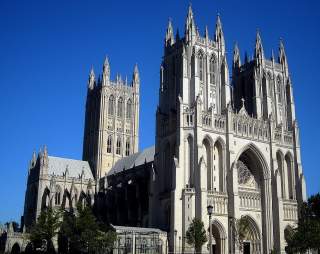 At the Washington National Cathedral on January 21, President Donald Trump participated in the traditional inauguration prayer service, and he included a member of the clergy who represents his own ideology and background: the “prosperity gospel.” This vein of doctrine in modern Christianity that argues that God will reward those whom he favors, not only in the afterlife, but here on Earth as well. Material wealth is thus both a sign and a result of God’s blessing.

This way of thinking has important policy implications. It can influence everything from Trump’s views on health care and Medicaid reform, to other anti-poverty debates at home, to the current refugee crisis abroad, to immigration policy. To the extent that Trump views it as part of his defining political philosophy, it should be scrutinized and measured against the standards of the faith from which it derives before being used to advance any particular political agenda.

To be fair, the prosperity gospel does have some Gospel buried in it. Those of the Abrahamic faiths, and many others as well, believe that God created this magnificent earth for human beings to enjoy. From the time when God made the earth and “saw that it was good,” to the deliverance of the Jewish people to their promised land, to the worldwide promises offered by the angels in the Christmas narrative, this well-endowed planet was clearly intended to be a place of blessing. To the extent to which the prosperity gospel reminds us of this, it is indeed consistent with God’s purposes and his love for all of us.

But blessing is not the whole story. It is not only people of faith who recognize that something went wrong with creation. The Abrahamic religions center their writings and teachings on how to address the brokenness we find on Earth. The promise of afterlife is about reaching a place where the ills of this existence are repaired. In Christian teaching, Jesus himself died on a cross to make possible the repair of humanity’s relationship with God, so profound was the wound.

And here, the prosperity gospel comes up short. It has no explanation for the problem of suffering—at least not one that makes sense in light of Jesus’s own suffering. If material wealth and worldly happiness are God’s rewards, presumably poverty and pain are his punishment. Those who suffer have not earned a better fate; those who are poor have not earned blessing.

The corollary for public policy is dangerous: those without material or financial success on earth only merit a limited measure of human assistance, because God has already chosen not to bless them as much as he blesses others. The poor become unworthy by virtue of being poor. Theology justifies the entrenchment of the status quo.

Christian scripture would teach otherwise. The Bible does not regard suffering as a sign of failure, but as the mark of a life placed in God’s hands. Consider the very scriptures read at that same inaugural service. From Paul’s letter to the Romans: “We also boast in our sufferings, knowing that suffering produces endurance, and endurance produces character, and character produces hope, and hope does not disappoint us.” Or from the Gospel of Matthew: “Blessed are the poor in Spirit.” Luke’s version of the same text puts if more plainly: “Blessed are the poor.” Period.

This message is consistent throughout scripture. The prophets of the Old Testament encourage us, as Micah did, to “do justice, love kindness, and walk humbly with your God.” The gospels and the New Testament letters are set among the poor, and they speak to the poor. Jesus talks more about money than any other subject. To those of us who regard Jesus as our teacher, it is clear that God does not want us to worship wealth and that he does not want us to view it as a gauge of worth.

In the cross, Jesus redefined power and success. His definition has no place for “winning” as our new president so baldly described it in his inaugural address. Instead, any power comes from self-sacrifice. And any greatness that is not found in service of the poor and the weak is questioned.

Yes, God wants to bless us, and God wants us to be happy on earth. But a central challenge of the godly life is to pursue one's own happiness and well-being while recognizing that we cannot be truly well if we seek only our own advancement.

If President Trump looks no deeper than the prosperity gospel, he will find an inadequate message. Those who cherish Christian doctrine and Christian tradition deserve better, and have a responsibility to demand more.

The Reverend Anne Turner is a priest at St. Timothy’s Episcopal Church in Herndon, VA and a graduate of Yale Divinity School. Michael O’Hanlon is a senior fellow at the Brookings Institution in Washington, DC.