The Qatar Crisis Is an Opportunity for Trump 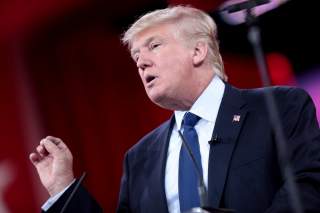 On July 3, 2017, a group of Arab nations extended the deadline for Qatar to respond to their list of demands in a diplomatic crisis roiling the Gulf by forty-eight hours. It said Kuwait’s emir requested the delay as part of his efforts to mediate the dispute.

Saudi Arabia, the United Arab Emirates (UAE), Egypt and Bahrain cut ties with Qatar on June 5, restricting access to their airspace and ports and sealing Qatar's only land border, which it shares with Saudi Arabia.

The Doha crisis is an opportunity for President Donald Trump. In this respect, the White House may convene a summit with traditional Arab allies who recently severed relations with Qatar, Fox News reported June 24. So, the Doha crisis presents President Trump an occasion to show resolve and leadership in U.S. efforts against terrorism and the ayatollah’s regime in Iran. He reportedly plans to put more pressure on countries that support Qatar like Iran and Turkey, shore up Washington’s ties with Saudi Arabia and its Arab Gulf allies, and signal that America is back in the game after an era of withdrawal by President Barack Obama. To do so, Trump must keep both Qatar and Saudi Arabia as U.S. partners, acting as an honest broker between Saudis and Qataris, rather than tilting too much in one direction or another.

President Trump has placed more pressure on Qatar and its partners, but inconsistent messages from within his administration—reflecting concerns that Washington not place Riyadh’s priorities above its own and absence of a coordinated greater Middle East strategy—hamper his efforts to lead. Although the Gulf Cooperation Council members do feel they have more support against Iran than previously, the jury remains in session on whether Trump will deliver on rhetoric indicating his return to the region is in a decisive way. No verdict can be expected until the threat of military force is paired with sustained diplomatic engagement within a coordinated strategy based on the U.S. priority to discover and disable the financial support for terrorism from nations in the region.

In a diplomatic earthquake on June 5, Saudi Arabia, Egypt, the UAE, and Bahrain severed ties with Qatar over its support for terrorism and its growing affinity toward Iran. Yemen, the Maldives, and the government of eastern Libya subsequently ceased diplomatic relations with Doha. Riyadh closed its border, gave Qatari citizens fourteen days to depart, and kicked Qatar out of the military alignment fighting Iranian-backed Houthi rebels in Yemen. Riyadh closed Qatar’s access to its only land border, through which about 40 percent of Qatar’s food needs are imported; both Iran and Turkey have increased their exports to Qatar via air and sea links.

Caught by surprise, and with no clear, interagency coordinated strategy, the State Department prematurely called for talks, with diplomatic language that was too soft to command attention much less respect of the parties. Secretary of State Rex Tillerson said, on June 9, “We ask that there be no further escalation by the parties in the region.”

Then on June 25, the secretary failed to suggest use of “coercive diplomacy,” which is diplomacy with the potential for use of force if deemed necessary. Rather, Tillerson stated, “The United States will continue to stay in close contact with all parties and will continue to support the mediation efforts of the Emir of Kuwait.” Regardless of these two overly soft statements, Tillerson is spot on in seeking to keep all the Gulf States within the American system of partners.

Fewer than two hours after Tillerson sought to calm the waters on June 9, President Trump accused Qatar of funding terrorism: “The nation of Qatar, unfortunately, has historically been a funder of terrorism at a very high level…. We have to stop the funding of terrorism.” Although Tillerson also referred to Qatar and terrorism, his words were not as biting as those of Trump.

The president should follow up his rhetoric with leaks on U.S. preparations to redeploy many of the 10,000 American troops from Al Udeid air base. While access and use of the base should not be tossed away, Washington must be clear that in its fight against militant Islamist terrorism and Iranian hegemonic efforts, it will not allow itself to be held hostage or become dependent on others whose interests might not align with ours. Placing relocation talks on the table or at least under it would resonate throughout the Middle East, and beyond.

On June 13, the UAE ambassador in Washington said that the United States should consider moving its air base from Qatar to the United Arab Emirates. He suggested the Trump administration use its leverage to place more pressure on Qatar for its support of terrorism and extremism. The UAE already houses the U.S. Central Command. So, this suggestion is not so far-fetched to be dismissed by Qatar as a bluff. One expects U.S. military and civilian staff-level planners have considered options to Al Udeid—if not before June 5, subsequently.

Trump’s coercive intent, however, has been weakened by inconsistencies in treatment of Doha as compared to Riyadh and others. On June 23, Jon Schanzer wrote in The Hill that:

Qatar is undeniably a problem. The country is a haven for Hamas, the Taliban, Syrian jihadists and more. But the entire affair is an odd spectacle. The other Gulf states have not exactly tackled their own terrorism finance problems with gusto. Saudi Arabia, for example, remains the top exporter of the extremist Wahhabi ideology, and it's particularly rich that Kuwait, a country that terrorism finance officials have routinely singled out, is acting as mediator.

Schanzer is correct, and until the Trump administration creates a sustained, coordinated approach to tackling terrorist financing throughout the region, nations may seek to get away with as much as possible by pointing out the failings of their neighbors.

Meanwhile, other regional actors seek to take advantage of the situation. Some nations, like Iran and Turkey, were already supporting Doha in pursuit of their own regional hegemonic interests. One way to increase the pressure on Iran is to open the door to prodemocracy Iranian dissidents. Likewise, one way to intensify the pressure on Turkey is to reject its definition of the conflict in Syria and insist on Turkey being a full NATO partner, both a contributor to as well as a consumer of collective security.

Preparing for the trip to the Gulf, Trump’s national security advisor, Gen. H. R. McMaster said on Apr. 30 that Iran was responsible for disastrous events in the region. And on June 19, partly in response to the Doha Crisis, Secretary of Defense James Mattis said that he considered the three most severe threats to America as “Iran, Iran, Iran.” But others disagree with this characterization, saying the Trump administration’s threats to Qatar were destabilizing the region, implying Washington instead of Tehran was the problem. President Recep Tayyip Erdoğan of Turkey, in pursuit of Turkish pre-eminence in the region, has tried to juggle Iran, Saudi Arabia and Qatar.

Looking Back and Forward

Coauthor Raymond Tanter visited Qatar in 2005 to participate in the BBC Doha Debates. Although the topic was the Iraq War, he had an occasion to converse with several members of the Royal Family, members of think tanks, and university professors about the role of the United States in the region and in the Gulf in particular. Tanter found considerable anti-American sentiment, in part because of the Iraq War. The State Department should seek to reverse these sentiments going forward for President Trump.

In conclusion, President Trump should:

First, seize the Doha crisis as an opportunity for a coordinated diplo-military approach, aka “coercive diplomacy.” Convening a White House summit with traditional Arab allies who broke relations with Qatar over its support of terrorism and ties to Iran is a good second step—the first step being the National Security Council developing an American strategy coordinated among all U.S. stakeholders.

Second, keep Qatar and Saudi Arabia as U.S. partners, serving as the honest broker in this “family dispute.” As a powerful but distant sheikh-like partner, Washington is positioned to aid the rival Arab nations resolve their disputes to the benefit of all, including U.S. counterterrorism efforts.

Third, place the possible relocation or dispersal of U.S. forces into consideration, not as a bluff, but as a reminder to all that Washington will not allow host nations to direct our policies by holding us hostage to access and use of facilities at our friends’ or allies’ bases.

Raymond Tanter served as a senior member on the National Security Council staff in the Reagan-Bush administration and is now Professor Emeritus at University of Michigan. You can follow him @AmericanCHR.

Edward Stafford is a retired Foreign Service officer; he served in Political-Military Affairs at the State Department, as a diplomat with the U.S. Embassy in Turkey and taught at the Inter-American Defense College. You can follow him @egstafford.