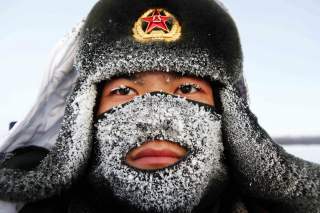 IN INTRODUCING its new National Security Strategy, President Trump’s White House identified China as a “revisionist” power, a “rival” and “competitor.” Throughout its sixty-eight pages, the document catalogues Beijing’s hostile behavior and suggests that Chinese influence in America and elsewhere is “malign.” It is right to do so.

Fortunately for America and contrary to Washington conventional wisdom, the mighty-looking Chinese state is, in reality, particularly vulnerable at this moment. For one thing, its slowing economy is on the verge of a debt crisis. At the same time, Beijing, largely because of the expansive vision of its ruler, Xi Jinping, is overstretched. China’s provocative acts are alienating other states, strengthening a growing coalition against Beijing. Xi’s relentless pursuit of absolute control at home has weakened Chinese institutions. The Chinese people are restless.

The popular narrative about China today resembles that of the Soviet Union in the early 1970s. Then, Americans believed they had to accommodate Moscow. Within two decades, however, the Soviet empire imploded. Trump is by no means Ronald Reagan, but the current president, like his illustrious predecessor, is willful and disposed to breaking convention. More than at any other time in this decade, the United States is in a position to demand that Beijing adhere to established rules and norms.

AT FIRST glance, the extraordinary four-decade rise of China gives Beijing a definitive edge over Washington. And most observers believe that advantage will only widen over time. China’s economy will overtake America’s by 2032, according to a report released in December by the Centre for Economics and Business Research, in London.

Some think the 2032 prediction is far too conservative. The Chinese economy will be the world’s largest by 2027, the Goldman Sachs analyst Jim O’Neill contended in 2011. In 2016, one observer, using Conference Board data, predicted the crossover year would in fact be 2018.

Big economies push smaller ones around, but don’t expect Chinese general secretaries to be bossing American presidents anytime soon. As an initial matter, it is extremely unlikely that China’s economy will surpass America’s by 2032, much less 2018 or 2027.

China is on the edge of a systemic debt crisis. The country avoided a downturn in 2008 only by embarking on one of history’s largest and longest spending campaigns, a two-part effort. First, there was a formal stimulus plan, a $586 billion, two-year initiative. Second, Beijing forced state banks to extend credit, primarily to state entities, in an unparalleled spree. All parts of the state were mobilized in this zealous program. Lin Zuoming, then the general manager of the Aviation Industry Corporation of China, publicly complained in early 2009 that officials made his state enterprise borrow the equivalent of $49.2 billion from twelve Chinese banks, declaring that he was concerned about what to do with all that cash.

In the five years after 2009, Chinese banks extended an amount of credit that was roughly equal to that in the entire U.S. banking system, even though at the end of 2008 the Chinese economy was less than one-third the size of America’s. And the lend-a-thon/spend-a-thon has continued since the end of that half decade.

Beijing technocrats had long dictated outcomes, so that is what they did in 2008. As they overpowered market forces in China, they prevented the correction that swept market economies late last decade. Yet because Chinese officials were determined to avoid a downturn at home, the underlying imbalances in China’s economy became larger.

The most important imbalance is the country’s indebtedness. In 2008, China’s debt-to-GDP ratio, a standard metric for debt sustainability, was 130 percent. Today, there is no agreement on the number, but many put it north of 300 percent, and some believe the figure, once so-called “hidden” liabilities are counted, has crossed the 400 percent threshold into stratospheric territory.

Now, Chinese leaders are continuing to pile on the debt in order to keep up growth rates. Their country, however, is not growing at the 6.7 percent pace announced by the official National Bureau of Statistics for 2016. In the middle of 2017, the World Bank issued a chart that revealed the Chinese economy in the previous year had grown 1.2 percent. That figure, shockingly low to some, is consistent with the most reliable indicator of Chinese economic activity: total primary energy consumption. In 2016, that metric was up 1.4 percent.

Even at 6.7 percent growth—or the 6.9 percent announced for 2017—China is incurring debt about three times faster than it is producing economic output. Beijing can, at least for some time, continue debt accumulation at this frantic pace, because it controls the large lenders, the large borrowers, the markets and the courts.

“It would appear that China thinks it can grow its way out of its current debt problems in the same way it did in the ’00s,” Fraser Howie, the coauthor of Red Capitalism: The Fragile Financial Foundation of China’s Extraordinary Rise, told the National Interest. “But the world economy is now very different, China then rode a wave of global growth and World Trade Organization entry, which is no longer available to it.”

Nonetheless, as Howie puts it, Beijing remains “drunk on credit.” Chinese technocrats continually talk about “deleveraging” and actually try to slow credit growth from time to time, but they do not sustain their efforts because a continual reduction in debt would result in a severe downturn. Beijing’s newest initiatives show desperation: packaging dubious loans for sale to consumers and restricting sales of apartments to prevent values from cascading down.

Peking University’s Michael Pettis told Fortune at the end of last year that since World War II there have been “at least two dozen decade-long investment growth miracles” similar to China’s. All suffered a “terrible adjustment,” he noted, and in none of these historical precedents were “imbalances at such deep levels and debt at such high levels” as China’s are now.

At some point, China’s economy will have to “adjust,” because Chinese leaders, despite all their powers, have yet to rewrite the laws of economics. And because they have prevented market corrections for so long (Beijing claims 1976 was the last year in which Chinese GDP declined) the inevitable downturn must be severe.

That severe downturn can take the form of a crash—perhaps the world’s sharpest—or decades of recession or recession-like stagnation. No matter how the economy adjusts, China is unlikely to catch up with the now-resurgent, and larger, American economy anytime this half century.

And China’s adjustment could be coming soon. At the Communist Party’s Nineteenth National Congress, held in October, Zhou Xiaochuan, the governor of the People’s Bank of China, publicly mused about China suffering a Minsky Moment—the point where asset values collapse, foreshadowing a market crash.

The extraordinary comments of the head of the central bank mirror concerns among the Chinese, elites and commoners alike. That concern is evident in the flow of cash leaving the country. In 2015, net capital outflow from China amounted to $1 trillion, according to Bloomberg. In 2016, it appears outflow was somewhere in the vicinity of $1.1 trillion. In 2017, outflow declined sharply, but only because Chinese technocrats imposed draconian capital controls, many of them not formally announced.

NOT ONLY is money fleeing China; so are the Chinese themselves. Survey after survey—some conducted by Chinese state entities—shows that almost half the country’s wealthy plan to emigrate in a half-decade time frame.

The new wave of emigration, evident in the increase of Chinese faces in the world’s major cities, is a reflection of more than just anxiety about an impending failure of the economy. Xi Jinping is taking China in particularly troubling directions. His relentless pursuit of control has roiled the Communist Party, reversing decades-long moves to institutionalize Chinese politics. There have been, throughout the tenure of his rule, rumors of attempted coups, with one surfacing as recently as December.

At the same time, Xi’s ambition—should we call it hubris?—has led to China overextending itself abroad, from border areas to far-flung locations. An increasingly provocative foreign policy, marked by irredentism, is pushing other states into coalition to protect themselves from Beijing’s expansionism.

The most significant such grouping is the “Quad,” consisting of the United States, Japan, Australia and India. Last decade, Beijing was able to derail close cooperation among the four democratic states, but after years of Chinese provocation, these friends are now working closely. And they are drawing in others, most notably Vietnam.

Beijing may be able to irritate Hanoi without lasting consequence, but it can’t expect the same with New Delhi. Once, Indian policymakers could see no farther east than the Strait of Malacca. But now they state that both the South China Sea and East China Sea are integral to Indian security. That change, which means India is developing links with East Asia, is in direct response to Chinese provocation in the waters surrounding India’s shores.

America and its friends form a powerful combination. “Together, the United States and our allies and partners represent well over half of the global GDP,” Trump’s National Security Strategy states. “None of our adversaries have comparable coalitions.” China, for example, has one formal ally: the Democratic People’s Republic of Korea. It has only one large friend—Russia—but the Russians are also weak, and in some ways another drain on Beijing’s overextended resources. At a time when China needs friends, its paramount leader appears determined to pick up weak partners and alienate strong states.