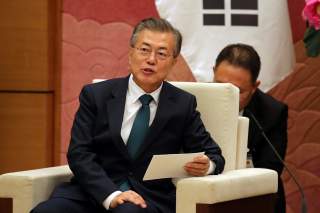 The two Koreas stunned the world by agreeing to hold an inter-Korean summit between their top leaders, Moon Jae-in and Kim Jong-un. The surprise has been further amplified by President Donald Trump’s instant, somewhat impromptu acceptance of Kim’s proposal to meet with him, which was verbally delivered by a high-level South Korean envoy who met Kim in person. The first historic summit between a sitting U.S. president and a North Korean leader will be likely held in May if everything works as agreed, not long after the third inter-Korean summit planned for late April.

Despite the significance of the upcoming U.S.-DPRK summit, the White House is likely to suffer from the lack of time and personnel to prepare for this tightly scheduled historic meeting. The abrupt dismissal of Secretary of State Rex Tillerson is only the tip of the problems at Foggy Bottom; a number of key positions at the U.S. State Department are still vacant. It also remains uncertain how early Mike Pompeo, Trump’s choice to replace Tillerson, can be confirmed by the U.S. Senate and officially get his team ready for the May summit. Furthermore, National Security Advisor H. R. McMaster is officially leaving his position soon to be replaced by former U.S. ambassador the UN John Bolton, leaving doubts on what role the National Security Council is currently playing for the preparation of the summit.

Under these circumstances, the role of South Korea as an intermediary for the bilateral talks between Washington and Pyongyang is becoming ever more crucial. The media gives credit to President Moon for making this summit between longtime adversaries possible; yet the substantive role that South Korea will be able to play in the upcoming process leading to the Trump-Kim summit appears to be overlooked or underestimated. Moreover, U.S. pundits raise doubts on Kim’s sincerity for the summit and criticize Trump’s hasty acceptance of Kim’s offer. Less attention is however being paid to how the U.S. government can make the best out of the current uncertainty and unpreparedness, using the North-South talks.

South Korea has already played a major role in turning this unthinkable U.S.-DPRK summit into a real possibility, offering a bridge between Trump and Kim who engaged in a fiery war of words just last year. And now, President Moon and his team are tasked with another critical, but difficult, mission: producing substantive outcomes in the upcoming inter-Korean summit which can satisfy all the parties involved, and thus paving a practicable way for an unprepared Washington as it embarks on its talks with Pyongyang.

Diplomatic negotiations are generally a long process that requires expertise, strategy and preparation, with which the Trump administration is not well equipped at this moment. With no direct, high-level diplomatic channel set up yet between Washington and Pyongyang, South Korea, currently preparing for its own summit with the North, would be the most reliable source of information about Pyongyang’s positions on potential agenda for the Trump-Kim summit. The three main agenda items for the inter-Korean summit have been announced: denuclearization, a permanent peace agreement and progress on inter-Korean relations. Among the three, the first two items are highly likely to be included in the Trump-Kim talks.

The current diplomatic breakthrough with Pyongyang is unprecedented in terms of its “top-down” approach. This rare opportunity for a peaceful resolution of the tensions on the Korean Peninsula came about through strong initiatives from top leaders, particularly from President Moon. In addition, the breakthrough did not come overnight. Kim’s New Year’s speech was likely a response to Moon’s consistent efforts to engage North Korea in a mutually-beneficial process to reduce tensions on the peninsula.

Unlike his two conservative predecessors, Moon Jae-in, a human rights lawyer, has persistently pushed for engagement with Pyongyang. In his interview with Time magazine during his presidential campaign last year, Moon emphasized the importance of restoring the damaged relationship with the North. “Even if Kim is an irrational leader, we have to accept the reality that he rules North Korea,” and therefore, “we have to talk with him,” said Moon. Further, his experiences to help engineer the second inter-Korean summit in 2007 and a series of Six Party Talks as chief of staff to President Roh Moo-hyun (2003–2008) gave him some insights and confidence that the “step-by-step approach” applied in those early years would be still workable now. For instance, the 2005 Joint Statement of the Six Party Talks encompassed such steps as full abandonment of North Korea’s nuclear weapons, a peace treaty and a normalization of the bilateral relations between Pyongyang and Washington.

After Moon became president in May 2017, his administration endeavored to further sophisticate its engagement policy toward North Korea which was finally announced during Moon’s speech in Berlin last July. Emphasizing that “the denuclearization of the Korean Peninsula should be achieved in a peaceful manner,” Moon stated: “we do not wish for North Korea’s collapse, and will not work towards any kind of unification through absorption.” In the following month, he also made it clear that no military actions would be taken on the Korean Peninsula without South Korea’s consent, amid military tensions intensified not only by Pyongyang but also by Washington. Kim did not immediately respond to Moon’s overture and instead conducted a thermonuclear test in September. However, this was likely considered by the North Korean leader as a guarantee about his regime’s survival as his later shift to dialogue reveals.

In particular, Moon’s Berlin Doctrine was in contrast to ex-President Park Geun-hye’s “unification is a jackpot” address in 2014 which could have been interpreted by Pyongyang as unification by the South’s absorption of the North. Unsurprisingly, inter-Korean relations further deteriorated after Park’s “jackpot” speech. It is thus possible that Moon’s explicit promise not to attempt “unification through absorption” together with his offer for dialogue lessened Kim’s suspicion about Seoul’s intentions in later months, leading to his agreement on inter-Korean talks.

The rationale behind North Korea’s sudden willingness to talk is still unclear. Kim’s confidence in North Korea’s nuclear and missiles capability might be one factor; or, the “maximum pressure” from the United States accompanied by international community’s economic sanctions could be another. Nonetheless, it is at least obvious that without the steady trust-building process between the two Koreas in 2017, the third inter-Korean summit would not have been agreed. As the two Koreas did, the United States and North Korea need to embark on a trust-building process for the upcoming summit as early as possible.

North Korean foreign minister’s recent visit to Sweden, which represents U.S. interests in the isolated regime, with an expectation that three American detainees might soon return home is a positive signal for trust-building between Washington and Pyongyang. North Korea has not officially confirmed its summit with the United States, but this news implies that Pyongyang is stepping up its diplomatic preparation for the summit. Trump’s appointment of Pompeo as State Secretary can be another positive signal from Washington; Pompeo has been well aware of the details of South Korea’s outreach to the North through his intelligence channel. As chief of the CIA, he was in close contact with his South Korean counterpart, Suh Hoon, one of the key figures in the current inter-Korean dialogue. And Suh has been undoubtedly cooperating closely with his North Korean counterpart to prepare for the North-South talks.

Despite the possibility that unexpected developments might derail the Trump-Kim summit, South Korea’s active intermediary efforts backed up by the trilateral intelligence connection is likely to strengthen Washington-Seoul-Pyongyang coordination and thus increase the chance for the success of the upcoming summit.

Se Young Jang is a nonresident scholar in the Nuclear Policy Program at the Carnegie Endowment for International Peace.