The Real Meaning of Memorial Day 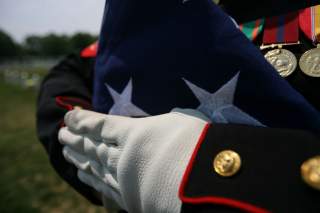 Dead matted the fields of Gettysburg, as thick as a corn crop before harvest.

The fallen of World War I were so numerous, that many lay exposed for years, white bones glinting through tattered cloth in the noonday sun.

During World War II, the frozen dead at Bastogne had to be stacked for later burial.

On Okinawa, E.B. Sledge wrote in his diary, “Every crater was half full of water, and many of them held a Marine corpse. The bodies lay pathetically just as they had been killed, half submerged in muck and water, rusting weapons still in hand…. Swarms of big flies hovered above them…For several feet around every corpse, maggots crawled about in the muck….”

This is the type of warfare that shaped the commemoration we know as Memorial Day. Nations went to war with millions under arms. Many families lost all their men. Entire generations were “lost.” And many—too many—sons and husbands were left on the fields where they fell.

This day was born in darkness, at a time when memories of the killing fields were still fresh. Yet even today—an age in which few of us go to war—the somber, deep, important meaning remains, as constant to the land of liberty as the Constitution itself.

Since the Civil War, attitudes of the Victorian era have profoundly shaped how we deal with the casualties of war. Victorians had a particular obsession with death. Rather than a private, family matter, loss was a prominent public activity. Graveyards were envisioned as “garden” cemeteries, more like public parks where citizens would stroll and reflect on the lives and accomplishments of those who had passed before. “Mourning” clothes were essential fashion statements, demonstrating the deep bonds between the living and the departed.

Victorian mourning habits dovetailed well with the age of total war. In many ways, modern wars forged a shared public memory, for every family lost someone, everyone knew a friend who had fallen, every community shared the losses of the nation. Public displays of grief and remembrance were a natural match for a national day of recognition for the war dead.

Increasingly over the course of the last century, the number of families touched directly by the fire of war has dwindled. Meanwhile the size and diversity of the American community has expanded.

That is unlikely to change. Today, when America goes to war, she does so in single digits (in terms of the percentage of population fighting). Further, the actual share of those able to bear the burden of battle has declined as well. By some estimates, up to three-fourths of the U.S. population between the ages of seventeen and twenty-four are not qualified for military service.

There are all kinds of well-meaning ideas about how to change that—getting back to an ersatz Victorian model when city, town and country shared equally in the burden of war. Once in a while, lawmakers introduce bills to bring back the draft or call for universal national service. In these times, such proposals are, in practice, impractical. More important, they miss what is quintessentially American about service and sacrifice—a distinctive American way that transcends Victorian sentiment.

From the first days of the Continental militia, America has been a nation of free peoples. Forced military service was an anathema—an extreme measure reserved only for times of the most extreme peril. Volunteerism in all aspects of public life, without coercion or special privilege, is the essence of Americanism—and it extends to military service.

Today, in a tradition as honorable and noble as the nation itself, America’s warriors fight and die because they have chosen to put their lives on the line for the rest of us.

It is past time to cast off Victorian notions. Yes, Americans should pause and remember our fallen from every field, from Bunker Hill to Baghdad. But Americans should also say a prayer of thanks for living in a nation where some stand up to preserve the liberty of all.

As long as our nation produces men and women willing to “bear any burden, pay any price,” our nation earns the liberty it enjoys. That is the eternal meaning of this day.

James Jay Carafano is a vice president of The Heritage Foundation.  He oversees the think tank’s research on national security and foreign affairs policy.