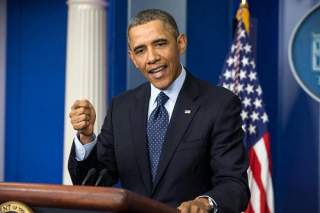 "We are powerful enough to be able to test these propositions without putting ourselves at risk. And that's the thing people don't seem to understand."

More than six years into his presidency, people continue to debate the core priorities of President Obama's foreign policy. What is the Obama doctrine? Some say it's soft power. Others say it's a directed economy of force. Still others say it's pragmatism—doing whatever works.

Obama himself answered this question a few weeks ago in a New York Times interview with Thomas Friedman, declaring: "We will engage, but we preserve all our capabilities." As always, Obama seemed a little bored or even exasperated by the question of strategic and doctrinal priorities.

Critics—and even some supporters—have replied by arguing that he really has no foreign policy doctrine or grand strategy at all. But this is to misread America's 44th president. Certainly if international strategy requires a rigorous matching of ends to means in a range of regional cases, then Obama imposes no such rigor. But if we define the term a little more loosely, then we see that he has in fact pursued a kind of implicit grand strategy quite consistently since entering the Oval Office, whatever the twists and turns.

As I explain in my new book, The Obama Doctrine: American Grand Strategy Today, that strategy has been to retrench America's military presence abroad and accommodate international rivalries, in large part to allow the president to focus on transformational domestic goals. In most discussions of the Obama doctrine, the domestic political component has been the missing piece of the puzzle.

Since first running for the White House, Obama has made it abundantly clear that he aims to secure a historic legacy as one of the country's great progressive presidents— “to transform this nation," as he once put it. His goal was never simply to win elections, but to safeguard and advance an ambitious domestic liberal policy agenda. Since his greatest aspirations have always been within the domestic policy arena, he is always very reluctant to risk them through international military entanglements that might shatter or threaten his center-left coalition.

The president therefore keeps the final foreign policy decisions in his own hands, in consultation with a tight inner circle of White House advisers. The resulting paradox is a highly centralized decision-making process in which clear, decisive foreign policy decisions are often delayed or avoided, precisely in order to minimize domestic political risk.

Nor is he the first president to factor domestic politics into his international decisions—far from it. But at the end of the day, his highest priorities are domestic, and this has had a powerful impact on his foreign policy choices. The desired strategy has been to internationally retrench and accommodate, while focusing on a liberal domestic policy legacy, or as Obama calls it, "nation building right here at home."

So, is the Obama doctrine working as intended?

Insofar as one purpose of Obama's approach has been to retrench America's strategic presence overseas without undue risk to basic U.S. interests, and to encourage new patterns of international cooperation through diplomatic accommodations, then it must be said that on balance the Obama doctrine is not working. Many of the president's core assumptions regarding international relations are sincere and well-intentioned, but unrealistic. Wedded as he is to these assumptions, Obama has never fully appreciated the possible costs, risks, and downsides of American retrenchment and accommodation. What international successes he has had, have generally come from going against type. Moreover the practical implementation of his foreign policy strategy has often been weak.

With regard to accommodation: Obama's handling of the Iranian nuclear negotiations is an excellent example of it. What sets this approach apart from a straightforward effort at hard bargaining is the president's apparent belief that major concessions toward Tehran might alter the ambitions or intentions of Iran's fundamentally anti-American regime. Indeed Obama said as much in the aforementioned Times interview with Thomas Friedman. As the president put it, he views a nuclear agreement with Iran as part of an "opportunity for those forces within Iran that want to break out of the rigid framework that they have been in for a long time to move in a different direction."

Or as he told Friedman even more succinctly: "Who knows? Iran may change."

The problem of course with relying on this hopeful assumption as a key component of your negotiating strategy with a skillful international adversary, is that said adversary can and very likely will pocket the concessions you make without changing their intentions at all. In years past, the stated position of the United States (and for that matter the United Nations) has been that Iran must dismantle its nuclear weapons program and allow for fully cooperative inspections to verify such dismantling. Now it appears the United States may accept an agreement which lifts international sanctions, and in effect puts an American and global stamp of approval on a nascent Iranian nuclear program that is neither fully inspected nor dismantled—and all this in the hope that "Iran may change."

Unfortunately it is at least as likely that Iran's authoritarian government will use the enhanced revenues from this agreement to further pursue aggressive policies throughout the Middle East, without altering its intentions in any dramatically benign direction. This is the undeniably heavy risk in Obama's strategy of accommodation, a concern shared by numerous Democrats, Republicans, and U.S. allies alike, but he simply will not admit its validity, dismissing such concerns as among those things "people don't seem to understand." We saw a similar pattern of attempted and failed accommodation over Obama's diplomatic reset with Russia, and are likely to see it in other cases as well.

With regard to retrenchment: Obama's desired direction has been clearly visible in overall patterns of defense spending, force posture, and security strategy. Contrary to the president's recent definition, we have certainly not preserved "all our capabilities" when it comes to U.S. military power.

To be sure, foreign policy under Obama has had multiple aspects, and sometimes contains assertive elements. Still, a staggered form of retrenchment—to "end wars”—has been a leading component and aspiration of Obama's approach, even in cases where the United States asserts itself rhetorically or temporarily. In many cases ranging from Libya, Syria, Afghanistan, and Iraq, to the Asia pivot, the president's material follow-through has not matched his temporary interventions. Predictably, the combination of rhetorical assertion with overall retrenchment or disengagement has often produced incoherent and disturbing policy outcomes at the regional level.

Altogether, and in spite of verbal declarations to the contrary, the reality of spasmodic U.S. retrenchment under President Obama—together with his persistent search for diplomatic accommodations with Iran, China, and Russia—have disconcerted numerous American allies in East Asia, the Middle East, and Central-Eastern Europe. The question on everyone's mind is whether the United States will actually support its allies in crisis situations. To be sure, the president says that it will. But since these words exist alongside powerful indicators of American retrenchment, together with repeated presidential statements that the U.S. must focus on domestic priorities, there is frequent confusion abroad as to whether the United States is coming or going.

The consequent feeling in allied capitals is that America is stepping back from its traditional international role. This may actually encourage violent conflict. In a way, it already is. In the case of core allies such as NATO, Israel, and Japan, the United States will have to act to defend those allies should it come to that. But if the U.S. gives the impression of endless ambivalence or disengagement, this could cause serious misunderstandings, whereby competitors believe the U.S. might never act forcefully, when in fact it eventually will.

Domestically, the Obama doctrine has been more effective in achieving several of the president's basic goals. After all, if a key first-term concern within the White House was to prevent international military entanglements from derailing either Obama's domestic policy agenda or his 2012 re-election campaign, then it must be said: mission accomplished. Of course, congressional Republicans put up staunch opposition—rightly, in my view—to many of Obama's socioeconomic experiments from the very start. He has not accomplished everything he desired. But by any objective standard, the Obama years have seen dramatic and sweeping policy changes in a liberal direction on a whole host of issues including healthcare, financial regulation, the environment, and same-sex marriage, just to name a few—and in no significant case have they been held hostage to diplomatic or military controversies overseas. In that specific sense, the Obama doctrine achieved its domestic purpose, at least until recently.