The Real Problem with Killing America's A-10 Warthog 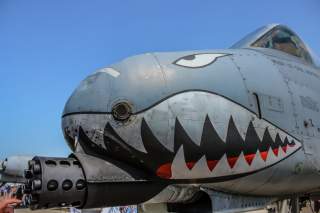 As lawmakers and senior United States Air Force (USAF) officials debate A-10 divestment and alternate approaches to close air support (CAS) responsibilities, the divestment of the A-10 community, not the aircraft, poses the largest risk to the future of the mission. In Gen. David Goldfein’s nomination testimony, he rightly stated the A-10 community is the Air Force’s “PhD force when it comes to close air support.” Although budgetary conflict over A-10 retirement is healthy dialogue for properly resourcing the CAS mission, the survival of expert tradecraft is far more important. While the hardware debate labors on, preserving the A-10 pilot manning pool as the bedrock of the future CAS pilot community provides an interim solution.

Col. John Boyd, pioneer USAF tactician and strategist, believed, “[t]o win wars, people come first, ideas second and hardware last.” He envisioned pilots trained for specific missions and planes designed to maximize their combat effectiveness in those missions. Committed to that ideal, Col. Avery Kay, Pierre Sprey and their concept design team ensured the original A-X program reflected Boyd’s purpose-driven, no-frills philosophy to weapons procurement. The resulting aircraft, the A-10, provides a premier example of mission-driven hardware, but it is not the crowning achievement of the design team’s effort. Instead, it is the matured community of CAS expertise that developed around the A-10 platform. As senior leaders debate A-10 divestment, decision makers must recognize the loss of expert people, not hardware, poses the largest threat to properly supporting America’s sons and daughters on the battlefield.

The history of American close air support is a tale of learn, master and forget. Institutional focus on strategic bombardment led the U.S. Army Air Forces to enter World War II with no concept of CAS or any organization to support it. Despite the bloody growing pains of early operations in the Mediterranean theater, the lessons learned by airmen of the Ninth Tactical Air Command, under the visionary leadership of Maj. Gen. Pete Quesada, enabled the delivery of masterfully effective close support amidst the chaos of Normandy’s beaches and Patton’s relentless advance across France. Merely six years later, Quesada’s innovations were completely forgotten as the strategically-focused USAF entered the Korean War with no professional close air support community. Tragically, U.S. troops were overrun by unopposed North Korean armor, while the Air Force struggled to reinvent CAS. The cycle repeated only a decade later in the jungles of Vietnam, and the USAF relied on Special Air Warfare units flying World War II–vintage A-1 Skyraiders to effectively recreate the mission. This pattern of learn, master and forget haunted the U.S. military in three consecutive wars, because it lacked a force-in-being of dedicated CAS professionals.

However, in 1966, the A-X program granted an opportunity for CAS experts to break this cycle. With several battle-hardened A-1 pilots on the design team, the A-10 became the physical manifestation of Boyd’s weapons-procurement philosophy. The sheer existence of A-10 units prevented the diversion of attention and resources the USAF historically allowed. For the first time, a group of committed pilots had a mandate to hone their close air support skills. As a force-in-being with focused professionals as adamant about CAS as the USAF was about strategic airpower and air superiority, the A-10 community advanced the mission by leaps and bounds in peacetime, and delivered indispensable combat results in every major combat operation since Desert Storm.

Although recent attempts to divest the A-10 have been newsworthy, the topic is not new. The platform was a target for Air Force budget-space as early as 1972, when the cancellation of the Army’s Cheyenne helicopter program removed the USAF’s primary impetus for A-10 procurement. Despite exceptional performances by A-10 pilots in every operation from Desert Storm to Iraqi Freedom, gradual Air Force downsizing drew the total fleet from its height of approximately thirty-five squadrons to just seven active-duty, operational units by 2006. Most recently, divestment intentions over the last five budget cycles reduced that number to just five squadrons. Budget priorities and modern battlefield threats seemingly echo as the reasons for reductions to the A-10 fleet. As intense debate on hardware and budget space grab headlines, only lip service is being paid to the force-in-being that prevents the forget phase of history’s vicious cycle. The Air Force has not presented a suitable plan to preserve the community of experts who operate the A-10.

Because the Air Force personnel system manages and trains aircrew by airframe, platform divestment poses a direct threat to communities of expertise. A formal directive, known as the Ready Aircrew Program Tasking Memorandum (RTM), dictates the primary training objectives assigned to each aircraft. In multirole platforms, the RTM unavoidably creates competing training priorities. Another formal directive, the Designed Operational Capability (DOC) statement, aims to balance these conflicting priorities by assigning squadrons specific mission responsibilities. Because the personnel system transfers pilots to new squadrons based solely upon aircraft qualification, young officers in multirole communities rarely have the opportunity to mature with a singular mission focus driven by consistent DOC tasking. This process espouses a “jack of all trades, master of none” concept.

On the other hand, in so-called “niche” communities, the RTM and DOC statements have much different effects. Here, the RTM has fewer primary training objectives and provides a persistent focus and a basis for gaining, honing and expanding true expertise. In these squadrons, DOC statements focus on the application of those objectives to specific theaters rather than compromising training among conflicting missions. In the A-10, two of the three primary missions in the RTM are CAS and Airborne Forward Air Control—a mission carrying special qualification to control the employment of CAS assets. Aircrew developed in such a community learn to live and breathe the CAS mission, advocate for the mission in combat and in peacetime, and become part of an invaluable, continuing CAS culture. In turn, these are the qualities that drive the community to be the “doctors of CAS” that General Goldfein referred to.

Divesting the A-10 in favor of a multirole solution virtually assures CAS expertise will evaporate as multirole communities return their focus to traditional air-minded missions. The competing priorities of multirole RTMs and DOC statements will, by necessity, severely reduce the amount of training and resources available for the CAS mission. This holds true not only for the aircrew, but also for USAF joint terminal attack controllers. Furthermore, this solution will disperse CAS experts to the point of ineffectiveness. Some will transfer to new airframes, but singular voices advocating CAS within squadrons will not be enough, let alone a small group within already established multirole communities. Others will leave the Air Force as the community’s uncertain future leaves young, talented officers little hope for upward mobility. This is not speculation about the future. The dispersion and loss of the A-10 community has already begun.

The oncoming challenge is clear: The Air Force must collectively preserve the A-10 pilot manning pool as a force-in-being to save CAS expertise from the dilution of current training and personnel bureaucracy, regardless of its fiscally based hardware decisions.

A swift, simple and affordable first step is to preserve some form of personnel coding for A-10 pilots as the bedrock of the Air Force’s future CAS pilot expertise. Either with an actual specialty code or simply an identifier, these pilots should continue to execute the A-10’s RTM. Whether decision makers agree to keep the A-10 for the foreseeable future or transition to an alternate airframe, the Air Force should designate specific, DOC-tasked squadrons among a single airframe to employ the entire pool of current, A-10 qualified CAS professionals. These necessary, people-oriented benefits can be achieved unilaterally by the Air Force without the recurring budget debate over platform divestment and procurement—making it a swift, simple and affordable interim solution to the longer-term hardware dilemma.

Nothing better secures the future of CAS than a community of dedicated, passionate experts. Until the PhD-level expertise of the A-10 community is secured as a force-in-being against dispersion and decay, history proves current, albeit necessary, hardware-centric debates are simply the modern perpetuation of the traditional and dangerous learn, master and forget cycle. Unfortunately, America’s sons and daughters on the front lines could pay the price for this mistake in blood yet again. The best way to avoid repeating history is to seriously heed Boyd’s mantra: “People, Ideas, Hardware—in that order!”

Image: A-10 Warthog at the 2015 McDill airshow. Flickr/Holmes Palacios Jr.