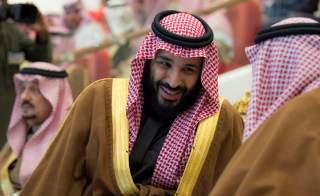 In a New York Times op-ed in February, Raif Badawi’s wife, Ensaf Haidar, ascribed the recent liberalizing policies in Saudi Arabia, such as allowing women to drive and questioning the clergy’s insistence that women wear the abaya, to hard work by dissidents such as her husband, and decades of intensive women’s rights efforts by such famous activists as Wajeha al-Huwaider, Manal al-Sharif and Loujain Al Houthloul. She posits that the incremental changes are a testament to the effectiveness of grassroots activism.

In another article, Daniel Greenfield attributes Saudi Arabia’s movement away from support for Islamists, and its harder line on organizations like the Muslim Brotherhood and Hamas, to the influence and pressure of President Trump and his administration. Both premises are likely false; full credit should go to King Salman on reacting appropriately to the national-sovereignty concerns presented by Islamists, and to Crown Prince Mohammed bin Salman on taking the initiative on more liberal policies. Yet both dissidents and the West have played an important role, and can be instrumental towards positive changes in the future.

The facts are as follows: after decades of exporting hard-line Wahhabi Islam around the world, Saudi Arabia found itself in a predicament, in which Islamists advocating revolutionary overthrow of the monarchy within its own borders. In March 2014, well over a year before Donald Trump announced his campaign for the presidency, Saudi Arabia designated the Muslim Brotherhood a terrorist organization. Despite supplications from Saudi Arabia, Egypt and other countries, President Trump has not yet designated the Muslim Brotherhood a terrorist organization, although he recently announced the designation of several proxies.

In fact, the leaders of countries such as Egypt and Saudi Arabia have long approached the administrations of both Barack Obama and Donald Trump with concerns about the regional and international dangers of the Muslim Brotherhood and its sponsorship of various terrorist organizations around the world. If anything, Trump’s administration has been influenced by evidence from various Middle Eastern allies that the Muslim Brotherhood’s influence, and certainly that of a number of its proxies, are a serious concern.

In Saudi Arabia, the policy of confronting Islamists actually started under King Abdullah, but King Salman has aggressively pursued it, and continues to do so, with the understanding that the continuation of the monarchy, as well as stability and order in the Middle East, depend on state actors’ ability to confront insurgents. Likewise, Saudi Arabia’s growing regional defense alliances against Iran and other threats predate the Trump administration—and are, in fact, a direct response to the effects of the Obama administration’s nuclear deal. In fact, Prince Turki al-Faisal, the former Saudi intelligence chief, appeared with Michael Herzog and Dennis Ross at the Asia Society in New York in the summer of 2016, months before the U.S. presidential election, advocating that reform in the Middle East should come from within.

The government, therefore, was already working on setting in motion plans for both internal reforms and security alliances.

What role did dissidents play in considerations for liberalization? Whether or not they have influenced the crown prince’s thinking, the fact that the decision was ultimately his own lies in the simple truth that his predecessor, Prince Mohammed bin Nayef, paid no heed to women activists—and in fact made matters worse for the Saudi kingdom’s image by ordering the arrest of Raif’s sister, the women’s rights activist Samar Badawi. Raif Badawi’s personal fate aroused a great deal of international attention and pressure; however, despite the apparent suspension of the remainder of his lashing sentence, he remained in prison.

Likewise, Prince Mohammed bin Nayef took no action to respond to the actions of women’s-rights activists. Much of the negative publicity that Saudi Arabia received at the time was due as much to the Obama administration’s shift to Iran, where similar sentences are common and employed to this day, as to the nature of the gross human-rights violations inside the kingdom. There was no reason to believe that had Prince Mohammed bin Nayef remained in power, the situation would have changed considerably—or, for that matter, at all. The prince showed no interest in the decades of internal grassroots movements. One might argue that his inability to move with the times and to help Saudi Arabia gain positive PR that contributed to his political downfall.

Yet those who believe that the sole reason for the current reform is a desire to appeal to Western sympathies, or pressure from dissidents, are ignoring key facts concerning the West’s interest in human rights. Raif Badawi’s campaign, after a splash of immediate attention following his unconscionable ordeal, eventually stopped receiving the global spotlight. Even people like Canada’s Justin Trudeau—who, while campaigning for office, met regularly with Ensaf Haidar—has not brought up her husband with the Saudis and has not made any significant contributions to freeing him since getting elected. The world cares about human rights, whether in Saudi Arabia or anywhere else, only when it is politically convenient to do so.

For that reason, it is not hard to see that, so long as the kingdom is open to visitors, there will be no shortage of adventurers, of the kind who would gladly visit North Korea, Cuba or any other country with an abysmal human-rights record, who would head to Saudi Arabia without asking any questions. Likewise Western countries, to the extent they are interested in Saudi Arabia at all, continue to do business with the country, and their criticism of the country’s role in the war in Yemen, its standoff with Qatar or other foreign-policy developments, is irrespective of its ongoing internal reforms. Western governments have not been overwhelming the Saudi government with praise over these internal steps. The fact that they continue despite tepid reaction from Riyadh’s alleged targets shows likelihood of good faith, as well as internal considerations that are not dependent on the West. The importance of adjusting expectations regarding women’s participation in the economy is but one of the pragmatic factors that drives the decisionmaking process.

However, that does not mean that dissidents’ work has been irrelevant or wasted. On the contrary, several positive observations are worth making. First, whether or not Mohammed bin Salman is responsive to activists, he is making sound choices that will benefit the general population. (In fact, if he is doing so of his own accord, rather than under internal or external pressure, this is likely indicative of a level of awareness that is often unexpected from one in his position.) Second, regardless of the Saudi government’s actions, the country’s culture remains deeply conservative, and many of the dissidents’ troubles began at home rather than in the hands of the government. Raif Badawi’s own father pushed for his punishment, even as the government was in a position to be at least minimally more lenient. And Samar Badawi described a tyrannical and violent household environment, which she eventually fled.

To that effect, dissidents in Saudi Arabia have a different role to play than the opposition in Iran, where much of the population remained relatively liberal-minded even after the Islamic Revolution imposed strict sharia law and harsh punishments for critics. While in Iran a significant sector of the population looks with disdain on many abuses of power, and thus have sheer numbers to create problems for the government, in Saudi Arabia that is simply not the case. The population is overall much more conservative than the government; furthermore, the monarchy has had to use liberal-minded or cooperative clergy to bring about some of the reforms.

Saudis, in general, remain deeply respectful of religious authority; so long as there is a public fatwa in support of a given policy, they will go along and support the government—even if the policy clashes with their strict upbringing. Furthermore, Westernization alone has not been enough to shift that mentality. Many young Saudis have traveled to the West, had a good time and returned home in the same mindset and ready to meet societal expectations. For many Saudis, there has been neither incentive nor motivation to modernize, whether in pursuit of jobs for women, who are raised to see marriage and childbearing as pinnacles of success, or for many young people who live with their parents and can afford not to work at all. Culturally, Saudi Arabia is facing an uphill battle. Government-led reforms, therefore, whether genuine or cosmetic, will not outlive reformers with the will to enforce these legal changes, unless there is a concerted effort to introduce changes on the educational and social level.

Dissidents can play an important role in the culture wars. In fact, al-Sharif, al-Huwaider, Al Houthloul, Samar Badawi and others have already proven an inspiration, not only to other activists, but to thousands of other women who are too afraid to speak up, but who harbor dreams of change and express them in conversations with Westerners. Such incidents are frequent, according both to activists and to ordinary Saudi men and women. Raif Badawi, then, did not endure his hardships in vain, for he and other activists can inspire others, and raise questions and doubts in the popular imagination—something that no law can fully change. The government can lift the ban on women driving cars, but it cannot force women to defy their family expectations and sit behind the wheel. The monarchy can stop prosecuting who promote their causes on social media, but the activists must impel others to raise their voices and contravene the social mores, tribal politics, cultural habits and religious interpretations that hold back the rest of society.