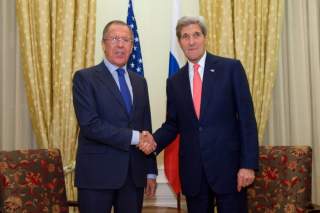 Providing lethal military hardware to the Ukrainian government would be a qualitative escalation in the means we have been using to achieve our objectives in that country. It would move us a significant step closer to the possibility of a direct military confrontation with the world’s other nuclear superpower. It is not a step that we would have considered taking during the Cold War in that part of the world. Why are we thinking of doing it now?

Ideally, foreign-policy decisions should flow from a clearly articulated and widely accepted view of the country’s fundamental national interests. The country’s objectives in particular situations should defend or advance those interests, while at the same time being scaled to the resources we are willing to bring to bear to achieve the objectives. The reality normally falls well short of that, but we should push for the highest standard possible, particularly on matters of war and peace.

Vital national interests are usually defined as those you are prepared to go to war to defend. In democratic societies, partisan politics ought to be about defining means and objectives within a framework of common understanding about American vital interests, but in contemporary U.S. politics, that is not necessarily the case. For a couple of centuries, Britain had a powerful, clear-eyed, fundamentally simple definition of its vital national interests that transcended party interests: 1) prevent the emergence of any dominant land power on the European continent; 2) obtain and maintain British naval dominance. I suggest that America’s vital national interests can also be succinctly defined: 1) prevent an attack on the homeland; 2) enhance the stability of the international system; 3) fulfill our security-alliance commitments. The first of these is presumably clear enough in principle; the second and third perhaps less so. We want to maintain the stability of the international system, because we are the most powerful state in it and its structure is advantageous to us. If we are perceived as unwilling or unable to maintain our security-alliance commitments, that will have a profoundly destabilizing effect on the international system.

There are some high-level objectives that flow from this definition of our national interests. One of the most significant is to encourage the spread of our political and social values, since an international system whose participants generally accept those values is not one likely to threaten our vital interests. The reality of the world today, however, is that an injudicious pursuit of that objective can produce conditions that threaten, rather than advance, our fundamental interests. So we deal with, rather than oppose, authoritarian regimes of varying kinds in all parts of the world. In some cases, we do it because we believe that to do otherwise would increase the instability of the system. In other cases, we do it because we are not prepared to employ the resources (means) necessary to effect fundamental change. We deal with the Saudi monarchy and the Egyptian military because our security interests trump our human-rights objectives, and because we are not prepared either to employ the means or incur the risks necessary to replace them.

The protection of our interests and the pursuit of our objectives do not occur in a vacuum. They require us to consider the interests and objectives of other states. This is where the relationship between means, objectives and interests becomes crucial. We have a tendency in situations where our vital interests are not at stake to nevertheless articulate objectives that are too grandiose for the means we are willing to bring to bear to achieve them. That can have a variety of negative effects, but two stand out. First, it can get a lot of people killed who believe that we are willing to walk the walk, as well as talk the talk. This happened in Bosnia in the early 1990s. Second, and in contradiction to the first, we can become so enamored by our own rhetoric that we overcommit ourselves, to the detriment of our fundamental interests. Our foreign policy becomes the prisoner of our press releases instead of our press releases being an instrument of our foreign policy. From Vietnam, where we saw nonexistent dominos falling, to Iraq, where we saw nonexistent weapons of mass destruction being built, we have committed inordinate amounts of blood, treasure and tears to pursuing objectives that we wrongly persuaded ourselves were necessary to protect our vital national interests.

Before taking a step such as providing lethal military hardware to Ukraine, we need to determine whether we have vital interests there, what our objectives are and whether the means we are prepared to employ are appropriate for our objectives. And, since international affairs do not occur in a vacuum, we must also ask ourselves the corollary questions for the other principal power involved—Russia. Unfortunately, U.S. policy makers appear to be addressing the questions about U.S. interests, objectives and means in the wrong order and effectively to not be considering the corollary questions at all. The foreign-policy objective that brought about this crisis—cementing Ukraine’s alliance with the West via steps toward admission to the European Union and the potential for NATO membership—was determined without examining how this would affect vital U.S. interests, while grossly underestimating the means that would be necessary to achieve this objective, because policy makers failed to consider the quite predictable Russian reaction. In a classic example of foreign policy becoming a victim of press releases, they have been doubling down on an ill-advised objective by escalating the rhetoric and resources dedicated to achieving it.

A little perspective on Ukraine is in order. The country has been an independent state for less than twenty-five years, after several centuries as part of the Russian, then Soviet, empire and a history intimately intertwined with that of Russia since their historical beginnings. Since independence, Ukraine has been a strikingly corrupt economic basket case dependent on subsidized Russian oil for an overwhelming proportion of its energy supplies. Some of its elections have been democratic; the actions of its leaders once in office, less so.

Neither the country, nor its foreign-policy orientation represents a threat to our homeland. Whether its international orientation is more toward the West or toward Russia would have no intrinsic impact on the stability of the international system. (Obviously, if the United States and Russia elect to get into a fight over Ukraine’s orientation, that is another matter.) Ukraine has no claim on our protection, and it is against our interests to give it one, as NATO membership would. Absent any vital American interests, our objectives for Ukraine should, therefore, be limited, as should the means we are prepared to use to achieve them. And yet, we have adopted the objective of adhering Ukraine to the Western system and going about it in a way that predictably increases Russia’s sense of isolation and alienation from that system.

Unlike the United States, Russia does perceive itself as having vital interests in Ukraine, interests that are geopolitical, historic, economic and, yes, ethnic. Its minimum objectives appear to be to ensure 1) that Ukraine does not join NATO, either now or at any time in the future and 2) that any economic or political relationship Ukraine has with Europe takes into account Russia’s own current and historical economic and political ties with Ukraine. The naïve response to these objectives is to assert that Ukraine is a sovereign country whose own political, economic and security orientation is no business of Russia’s. If that is a principle that we are not prepared to apply to ourselves, we should be wary of applying it to Russia. If, by mutual and peaceful agreement, California and Texas left the union and became separate and sovereign countries, would we consider our vital interests threatened if they contemplated joining a foreign military alliance headed by Russia? Or sought to reorient their economic ties away from the United States by joining a powerful economic bloc from which we were excluded? The history of our relations with our sovereign neighbors to the south provides a pretty clear answer to those questions.

The military, political and economic means that Russia is using in Ukraine to achieve objectives that protect its vital interests are, if not admirable, hardly unique in the history of interstate relations; nor should they have come as a surprise to U.S. policy makers. They correspond closely to the techniques Russia applied in Georgia.

Arguably, this is a crisis that the United States and Europe provoked through inept statecraft. Leaving aside the blame game, however, the question is: what should we do moving forward? What is surely not in the U.S. interest is to stumble inadvertently into a direct military conflict with Russia in an area where it has vital interests and we do not. Providing lethal military equipment to the Ukrainian government—and forget the sophistry involved in calling anti-tank weapons “defensive”—does not mean that there will be a direct U.S.-Russian military conflict over Ukraine, but it does increase the risk to some degree. It would encourage the Ukrainian government in the belief that it can solve this problem militarily, and it will lead to increased Russian support for the eastern Ukrainian separatists to ensure that Ukrainian military forces cannot defeat them. A tit-for-tat escalation of military hardware and advisors is a predictable, if not inevitable, subsequent progression of events.